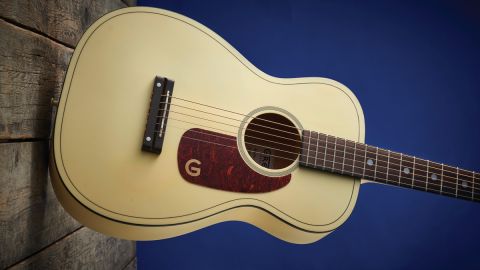 A pretty decent way to deliver a Gretsch for under £200.

“Crackerjack quality at a sober price!” burbles Gretsch’s website about this super-affordable acoustic.

We assume that ‘crackerjack’ means ‘good’ rather than Crackerjack the 1970s kids’ TV series, but in either case, the idea that this is an easy, exciting product designed for youthful, casual enjoyable entertainment works for us.

This guitar is all about one thing - squeezing as much quality as possible into an instrument that costs a measly £195 - and that’s what we bore in mind throughout our test. There are no electronics to bother with, no fancy accoutrements of any kind, and no components that have not been tried and tested on other cheap guitars.

Gretsch makes it eminently clear in the product description that the G9500 is meant to resemble “everyone’s first guitar”, and specifically the company’s Rex-branded parlour instruments from the 1930s to the 50s. Have they pulled it off? Let’s see...

There are cheap guitars and then there are really cheap guitars, as we all know, and the Gretsch we have here is no £20 knock-off from the local charity shop by any means.

You’re still paying as much as three tyres for your Volvo here, so you have every right to expect reasonable woods and a decent construction. That’s exactly what you get, fortunately, with a slick Vintage White finish - limited edition, apparently, although exactly how limited is not known - an agathis body and a nato neck. Neither of these woods will set records for tone or durability, but they’re certainly good enough for the purposes of this guitar.

The G9500 certainly looks the part, designed to be retro to the hilt, 1950s ‘Jim Dandy’ typeface and all. The single-ply tortoise pickguard features the all-important G graphic for a touch of class, and while the tuners and bridge aren’t of noticeably high quality, they look good and function perfectly well.

We were impressed by the attention to detail; there were no sharp fret ends, the finish is beautifully applied and the set neck joint appears to be as close to perfect as makes no odds.

The only downside to the physical construction of this dinky instrument is that it’s obviously not very strong. Don’t expect a feeling of solidity when you pick the guitar out of its case (not supplied; hey, that £195 pricetag comes with sacrifices), because it weighs a mere 1.5 kilos. Don’t leave it lying around on the stage at your next gig; even the briefest scuffle with the stage crew’s size 11 Doc Martens and you’ll be looking for a new guitar.

Mind you, the whole point of affordable gear such as this is that you can replace it, should it happen to be lying on the floor in the gig loading bay when your van reverses in. We’re not saying that you wouldn’t utter some vivid language if that happened, but at least you wouldn’t be witnessing the death of a £3000 Martin or Gibson. Be grateful for small mercies, eh?

As you’d expect from a small-bodied guitar, which in this case doesn’t go deeper than 95mm, the range of tones available is not extreme. If you’re after plenty of bass, go elsewhere - although you could easily bolt on a soundhole pickup and run the signal to a preamp for added low-end boost if you had to.

However, that’s not this instrument’s intended purpose; instead, the G9500 delivers clean, clear low and high mids, plus a reasonable amount of top end. Indeed, if you flatpick near the bridge you can coax a pretty zingy, crispy tone out.

More important than the frequency range for the average amateur is the clarity with which the guitar speaks, and here the Gretsch delivers an obvious win. Honky, hollow, clanky and woody (those technical terms again), the basic sound is pleasant and well articulated. The makers mention this guitar’s internal bracing in the company sales fluff, and well they might, because this productive little body punches above its weight when it comes to note clarity.

The available volume level is rather higher than we’d expected, perhaps due to the presence of all those mids. We’re not suggesting that you play an unamplified gig with this, unless you’re in your living room, that is, but there are more decibels here than anyone would have a right to expect - a sign of good construction and design.

As for the Gretsch’s all-round playability? Well, the 24” scale of this petite instrument, more than an inch shorter than many of the most common full-sized acoustic guitars, means several things in practice.

Firstly, guitarists with sausage-sized fingers will need to pay a bit more attention than usual, although Gretsch have made it slightly easier for us by building a fingerboard with 12 accessible frets rather than the usual 14.

Secondly, the string tension is friendly, without the increased tautness of longer scales; you’ll have fun doing blues bends as far down as a low F#, assuming you have reasonable finger strength.

Tuning down is doable to an extent, although drop D or DADGAD are about as extreme as we’d advise you to go. There’s just not enough bass for any lower tunings. Where the Gretsch excels is in the upper ranges of the frequency spectrum, and given its small dimensions it’s a doddle to achieve a refined, uptuned tone thanks to a capo on the first to third frets. Any higher than that, and you risk transforming the plangent, James Taylor-style twang that we all love into the squeaks of the mice from Bagpuss.

With the right performance and useful spec at a ridiculously low price point for a heritage brand, the Gretsch G9500 does indeed pull off the tricky task of delivering more quality than its cost would normally permit. It’s not a professional-quality instrument, but it’s not far off that point, and its makers are entirely honest about where it fits into today’s market.

Take note, though; this is not just another affordable guitar. The G9500 - and other, non-band-breaking instruments like it - is the parlour-sized vanguard of a movement that has been recognised in the electric and bass guitar worlds for some years now.

Nowadays, thanks to modern production controls in East Asia, we spoiled Western musicians are able to buy perfectly usable instruments at low prices. It’s not like it was in the old days (forgive us a moment of grandfatherly nostalgia) when you paid your money and you took a chance, often ending up with a piece of unplayable junk that barely deserved to call itself a guitar. These days, young players have a fantastic range of options at highly affordable prices.

This is one of the better cheapies we’ve seen, and we recommend it to anyone who doesn’t want, need a high-performing, high-cost, full-sized guitar.

Is it really ‘crackerjack’ quality? Depends on your point of view, but at this price, we won’t be too picky.