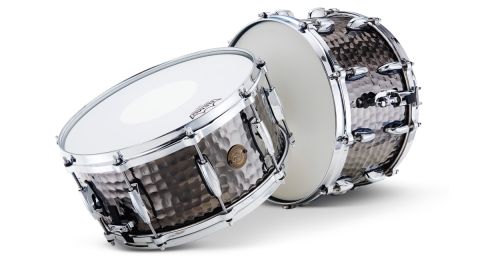 Handsome drums with the power and sensitivity of steel, controlled by the cast hoops and hammered black-coated shells. Part of the aptly named, revamped Full Range of Gretsch’s Taiwan-built snares.

Gretsch has marshalled its considerable range of snare drums into two main camps: the expensive USA Custom and Metal Shell snares and the more affordable Full Range snares, two of which we have here.

Gretsch has used the Full Range label previously, but then changed to the rather confusing Silver and Gold series. So an updated Full Range is back, comprising a wide assortment of drums to cope with every style of player and music.

While the USA Custom snares are expensive, like all Gretsch’s Stateside-built gear, these snares are made in Taiwan and are more competitively priced, if not cheap. The falling pound doesn’t exactly help.

The Taiwan factory has long produced the Renown Maple, with “a very experienced team of drum makers that are the essence of high quality”, according to Mario Junghans of Gretsch’s European distributors, GEWA.

Face it, everyone gets drums (and everything else) made in the Far East and reliability and quality issues have long been addressed. Where the USA drums score is on kudos and image; thus you pay heavily for such classic Gretsch signature fittings as the Lightning strainer, knurled centre-bead (on metal drums) and snap-in key holder.

In fairness the generic aspect really only surfaces in the snare strainer and wires. And although the strainer may look unmemorable, it is supplied by Gretsch’s ever-smart long-term partners Gibraltar. It lacks the stellar looks of Gretsch’s Lightning throw, but then many prefer its simple, trouble-free operation.

Steel snares are generally the cheapest option, associated with beginner kits, with the result that some drummers look down on steel as a bit on the vulgar side. But that is misleading. There’s nothing to say that steel is any less of a quality shell material, and for many it is actually the ideal all-rounder.

Although brass may earn the more ‘musical’ (whatever that may mean) epithets, and aluminium is more controlled and dry, steel is the densest material, the hardest and thus the ringiest and loudest. Qualities that many appreciate.

Several keenly-priced artist signature snares are steel, particularly those of hard-hitters like Chad Smith and Taylor Hawkins (the latter being one of the three Gretsch Signature Full Range models). These guys are not going to sacrifice tone for budget- conscious big sellers - they could choose any material they like and they choose steel. Steel’s tone is not inferior, it’s powerful yet clean. You can always rein in the volume if necessary - better to have too much than too little.

And in fact, to that end, the design of these two drums does temper the unruliness a bit. That dimpled hammering causes the inner sound waves to bounce around more, making the tone more complex and drying the sound. Combined with the heavyweight Gretsch cast hoops and full-complement of cast lugs this does focus the sound. There’s a feeling of control despite the considerable horsepower.

Steel is also good for sensitivity - play either drum towards its perimeter and the response is crisp. Ghost strokes come off well, especially given that these are deep drums. The 6.5" drum has plenty of bite, but even the 8", tuned right up for sharp, clear penetration, retains weight and a tone-rich body.

There’s also little evidence of that hollow woody clonk you sometimes get from any drum over 6" deep, especially (we find) if it’s aluminium. You know, that airy sound where you’re not sure if it’s a snare or a tom? The distance between batter and snares being such that the immediate sandpaper snare response is diminished. No, even with the 8" deep monster you know this is a snare drum. And again, we reckon that is one of steel’s strengths.