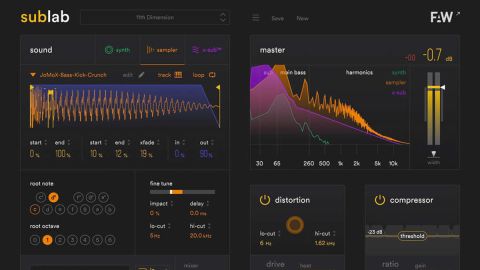 With its three tightly coordinated layers, cone-rattling X-Sub synth and tasty effects, SubLab is a must-have for bassheads.

We always appreciate a focused plugin, and SubLab (VST/AU/AAX), from the makers of the innovative Circle2, is about as task-orientated as they come, being dedicated entirely to the creation of sub-bass tones for hip-hop, trap and the like.

A hybrid instrument, it enables a simple, analogue-style synth layer and the specialised X-Sub synth (see X-Sub focus) to be blended with an edited kick drum (or any other sound if you’re feeling adventurous) sample, before filtering and processing are brought into play, for the kind of floor-shaking tones so essential to today’s urban genres.

With its flat, attractively colour-coded interface (green for the Synth layer, orange for the Sampler and purple for the X-Sub), SubLab is easy to navigate and gives great visual feedback, from the oscillator waveform and envelope graphics to the spectrogram, which shows the frequency curves of the three layers together. The preset library is divided into six themed ‘Bass Packs’, of which more are on the way to buy separately. With only 69 presets included, this flagrant sales pitching leaves a slightly bitter taste in the mouth, but SubLab is easy enough to program from scratch anyway, so it’s certainly no barrier to entry.

The three layers are edited in the tabbed Sound section, and blended in the Mixer below. At the time of writing, this doesn’t feature mute or solo buttons, necessitating a lot of needless fader dragging to hear layers in isolation, but FAW tell us that’ll be fixed in the next update.

With the Synth and Sampler layers presenting plenty of options for tonal and temporal editing, potentially going well above ‘bass’ territory, SubLab’s trademarked X-Sub engine not only ensures that the sub itself stays locked, but also that it translates on laptops, phones and other speakers incapable of handling low-frequency content.

Aiming to be a more accurate and convenient alternative to psychoacoustic bass enhancers, X-Sub synthesises a fundamental sub note (a gently distorted sine wave) that tracks the MIDI note input but stays within the 30-65Hz (C0-B1) range, and a series of harmonics that can define an audible note from C1-B3 and extend above that at decreasing amplitude. The level of the fundamental is controlled by the Lows slider, while the Harmonics handle sweeps horizontally to balance odd and even harmonics, and vertically to set their volume level. The spectrogram aids in visualising the two signals, but again, mute and/or solo buttons wouldn’t go amiss.

X-Sub is always a ‘dry’ signal, bypassing the filter, envelopes, and Distortion and Compressor modules, so as to maintain sub-bass consistency in the patch, no matter what happens in the other layers. It’s key to SubLab’s sound and effectiveness.

The one-oscillator Synth layer gives a choice of sine, triangle, saw and square waveforms, with up to three octaves of upward pitch adjustment in semitones, or five octaves downwards. To the detriment of workflow, SubLab’s three independent ADSR envelopes are built into the Synth section, despite the fact that two of them actually apply to the Sampler layer as well. The pair in question are Volume and Filter cutoff (see below), while the third, Pitch, does only affect the Synth. The envelope segments range up to 2s of Attack, and 10s of Delay and Release.

The Sampler layer accesses a library of kicks captured from a range of drum machines and synths by Roland, Vermona, JoMoX, Waldorf and others. Having to negotiate the full menu repeatedly to audition them quickly gets annoying, though - previous/next buttons are definitely called for. It’s not totally clear whether the add-on Bass Packs will include new samples as well as presets, but with 250 onboard, it’s a decent showing as it stands; and happily, you can import your own WAVs and AIFFs, too, by dragging them into the GUI.

Sample playback can track incoming MIDI notes or sit at a specific pitch (the root note of an external sample is automatically detected upon import), and the start and end points for primary playback and an optional loop are adjustable. The range handles snap to zero crossings, with +/- indicators indicating the polarity of the wave at the loop points, and very effective results can be had by setting up looping single-cycle oscillations - although the fixed zoom level of the sample display makes doing so fiddlier than it should be. Also up for manipulation are fade-in and -out times, +/-100ct of detune, up to 300ms of triggering delay, sharp low- and high-cut filters, and a limiter (Impact). As mentioned, the shared Volume and Filter envelopes are only available for editing in the Synth tab, and their presumably space-saving absence from the Sampler section is an annoyance.

SubLab’s resonant filter is applied separately to the Synth and Sampler layers via two Amount controls. Offering low-, high- and band-pass modes, it can track MIDI note pitch or not, and is capable of self-oscillation, which proves useful for high-frequency effects.

The Distortion and Compressor sections are also each applied to the Synth and Sampler layers independently. The Distortion features four tweakable analogue-style saturation algorithms, and yet more low- and high-cut filters, while the Compressor’s Ratio cranks up to 16:1, Release time ranges from 10-500ms, and Threshold control is made perfectly intuitive by its underlaid waveform. The best bit, though, is the Sidechain function, whereby the Synth layer is ducked by the Sampler layer, allowing the latter to punch through nicely.

Finally, the Width control uses mid-side trickery to widen the image without weakening the mono centre; a soft clipping limiter is on the output; and the Glide section provides adjustment of glide time and progression, and activation of legato mode. It should also be noted, incidentally, that SubLab isn’t velocity-sensitive. We’re told this is because it’s just not something the consulted hip-hop and trap producers were interested in as a feature, but we find it an odd limitation nonetheless.

How low can you go?

SubLab’s layering concept is powerful and fun to work with, and delivers incredibly rich, weighty, interesting and spectrally ‘present’ subs. The X-Sub oscillator lets you play around with the Synth and Sampler layers without compromising that all-important bottom end, while the Distortion and Compression modules bring dirt, energy and attitude in spades.

As discussed, there are a few issues, and the always-disappointing lack of a manual (also coming soon, apparently) is only exacerbated by a series of woefully inadequate tooltips; but SubLab’s sleek design and floor-shaking signals make it a formidable weapon for any producer working in its target genres. Indeed, it could easily become your go-to for sub-bass.