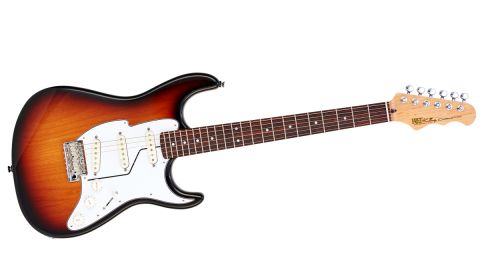 Credit where it’s due, this is simply a very good guitar.

New technology rarely comes cheap and when Fishman entered the electric guitar pickup market with its Fluence pickups, as retrofits, they certainly seemed on the steep side in terms of price.

John Hornby Skewes (JHS) distributes Fishman products in the UK and is also behind the Trev Wilkinson-designed Fret-King brand. Thanks to its ‘special relationship’, it has somehow managed to utilise this Fluence technology and very thoughtfully include a pretty sharp guitar for sub-£750. Game on!

This new guitar in the new Fluence-equipped range typifies what we, and many other players, have been saying for ages: Fret-King makes very good guitars. Indeed, if there were a definition of its Black Label instruments, it might read “nicely made working tools for working musicians”. It ain’t the hippest brand on the block, but its ‘affordable boutique’ marketing tag is accurate, as we see here.

The Corona features an alder body/maple neck construction, with rosewood-only 22-fret ’boards, and only one colour option.

This guitar is heavily Fender derived, but is far from a clone. It has a ‘modernised’ body outline: it’s horns are thinner than a Strat’s. The thick neck heels extend under the neck pickups, very similar to PRS’s set-neck or bolt-on guitars; the screws sit in separate recessed ferrules.

The Corona’s bridge is every bit the subtly modernised ‘Strat-type’ with push-fit, swing tension adjustable arm (although the small Allen key to tension the arm is placed some way under the top plate and is rather hard to access) and steel block. It goes for rear-lock tuners, due to its vibrato.

Now, the trickery lies in the pickups: ‘single width’ with Alnico IV rod magnets; the Gristle-Tone bridge goes for the same. The neck has Alnico V rods; the Classic Humbuckers have Alnico V bar magnets.

The Gristle-Tones are as is, but the Corona’s single widths also have an ‘HF Tilt’ option (not wired here) that simulates a “darker sound that is created when passive pickups are loaded by long instrument cables”, says Fishman. This could be wired to another pull-push switched 25kohm pot in the neck tone position. Each Classic Humbucker has this HF Tilt option and a coil-split option (neither are wired in here).

The trouble is, with such icons of the electric guitar, we all have our perceptions of how they should sound: we plug in and after a couple of strums think, ‘It’s not the same as my ’52, ’54...’ or whatever. Well, we’re listening to Fret-King here and with these Fluence pickups we’re getting plenty to listen to. First, there’s virtually no hum pick-up. Second, there are the different voices: they’re not like chalk and cheese, but relatively subtle shades of the same.

Putting down our reference modded Fender Roadworn Strat and plugging in the Corona, it sounds like a box-fresh axe with plenty of new string ‘zing’. Through a Fender-style combo, the sparkle is certainly evident and we’d be tempted to change the wiring so we had a tone on the bridge pickup, too. Pulling back either the guitar’s volume or our volume pedal removes a little hair - these have a healthy output - and we pull the tone back just to round the high-end a little.

Where this one scores is in its ability to go from these pristine, immediate cleans into dirtier, heavily gained tones with no hum and a clarity and note separation that sounds ‘produced’. Depending on your effects system, the buffered active output could well provide some extra clarity, too. To be critical, neither mix sounds quite as three-dimensional as our reference, or quite as woody.

With the huge experience and production nous of Trev Wilkinson, Fishman’s Fluence technology and what seem to be extremely competitive prices, we’re struggling to think of a player who couldn’t use these. And if you’re handy with a soldering iron, you can tweak the wiring for considerably more ‘voices’, especially the Esprit’s Classic Humbuckers.