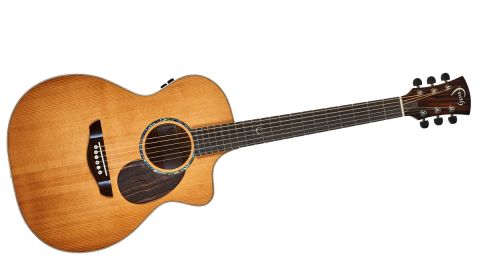 At 2017’s NAMM show, back in January, Patrick James Eggle took the opportunity to announce he’d be focusing on his eponymous electric guitars over his acoustic instruments.

It’s quite a turnaround, but fans of his rather fine acoustics at least get a parting shot in the form of the Indonesian-made Faith Guitars’ three-strong Legacy series designed by Patrick.

The Legacy models also reflect the hottest trend in acoustic guitar design: torrefied wood. We’ve reported this trend on numerous occasions but torrefaction boils down to a method of heat-treating timber to remove moisture, improve stability and, to an extent, make new guitars sound ‘old’, mimicking the wood found on vintage guitars.

Today we’re looking at the Mars, which pulls together a torrefied Canadian Sitka spruce top and solid African khaya mahogany back and sides, braced with quarter-sawn spruce and using smart solid flame maple binding. It also features a mahogany neck bolted to the body using a method designed by Patrick.

The woods mentioned so far would make a hungry woodworm’s year but don’t forget to leave room for dessert. Here we’re also served up tasty slabs of Macassar figured ebony for the Mars’ 406mm (16- inch) radius fingerboard, not to mention the bridge. These appointments not only gives the guitar excellent curb appeal, they also go a long way toward justifying the price tag. Macassar ebony is an expensive timber that is notoriously difficult to work with.

The eye candy continues with the mother-of-pearl rosette around each guitar’s soundhole, a teardrop pickguard and the ebony buttoned Grover tuners. We also like the fact that each fingerboard has a solitary ‘F’ mother-of-pearl inlay at the 12th fret. There are discrete little dot markers on the side of the neck to guide you to the right fret.

Moving on, skeletal remains have been plundered for the top nut, bridge saddle, and the pins that anchor the strings at the body end. Perhaps not what the hapless creature involved would have wanted but when it comes to tone and sustain many believe nothing beats picking on some bone.

Aside from the fact you get a deluxe hard case, the guitar features a much-loved Fishman pickup/preamp system, the Flex Blend. Driven by a 9-volt battery-fuelled preamp, this bad boy runs an under-saddle piezo pickup and a small condenser microphone into low-profile volume, tone and blend controls. You also get a small backlit onboard tuner.

The Mars features a slim neck profile, as well as beautifully seated frets and generous string spacing, facilitated by the 45mm wide nut - all of which would feature on most fingerpickers’ wish lists.

Acoustically, the guitar immediately impresses with the warmth of its tonal delivery - the Mars attacks with bags of volume. If you’re asking if this guitar actually sounds vintage, well, that’s tough to quantify. What we can say is the brash treble response you find in many new acoustics isn’t present here. There’s a mellowness in the top end that suggests some age or at least some serious playing.

The same is true of the bottom end. Even a cheap acoustic can pull off a piano-like twang straight off the shelf. What you really want is some tonal depth and richness to go along with that sustain. That’s what we get from the Mars. There’s a crisp attack that propels single notes into the atmosphere without compromising the warmth seemingly created by the torrefied tops and mahogany back and sides.

As expected, the Fishman Flex Blend system does a sound job of reproducing each guitar’s tonal goodies. The condenser mic - located just inside the soundhole - is the star of the show. We actually found it less prone to feedback than the under-saddle unit but there is the penalty of handling noise to pay if you run it solo.

Dialling in some of the under-saddle pickup works well too, especially if you want to thicken the amplified tone a bit. The only bug bear is you have to loosen the strings and dig around like a surgeon to replace a dud battery but it’s better than a hatch cut into that lovely tonewood, isn’t it?

You might not be able to order one of Patrick James Eggle’s own acoustics any more but these Faith Legacy series models are aptly named. In designing the models, Patrick has had his wicked way with the cream of available tonewoods while never losing sight of what makes an electro-acoustic guitar great.

This guitar features excellent playability and a versatile yet easy to navigate pickup system. Then there’s the sound. Some of the industry’s biggest hitters have nailed their colours to the mast of torrefaction - Taylor, Martin and Takamine, for example - and we’re onboard too. The tonal balance of our review model has a definite ‘age’ to it. There’s warmth there that you don’t expect to find in a new, unplayed guitar.

And if the price, for an Indonesian guitar, bothers you, well, that’s more about the rising price of global manufacturing: try and find a similar spec guitar that plays and sounds as good as these. Good luck!