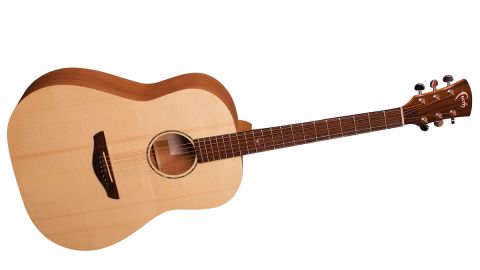 It’s been another great year for acoustics, especially if you have around £500 burning a hole in your hand.

Fender’s all-mahogany Paramounts, Gretsch’s Roots Collection and Guild’s Westerlys, alongside some gems from Sigma and Art & Lutherie. The debut of Taylor’s Academy line also turned our heads making the choice of which one to buy all the more difficult for players.

It’s a good problem to have and British-designed and based, Indonesian-made Faith has never been shy of adding to it. We’re hoping this guitar is a case in point.

First impressions of the pale and minimal look to the Engelmann spruce top and relatively light shade of the mahogany back and sides recall the hues of the Academy models we saw earlier in the year.

But the fact is Faith was doing the barer-bones approach with its Naked Series before Taylor went down that road: solid-wood guitars with the cosmetic dressing stripped back.

The plainer look won’t be for everyone but Faith’s contemporary feel and execution under the design expertise of founder Patrick James Eggle is convincing here.

As a drop-shoulder dreadnought design, it’s not surprising Faith is pitching this as an all-rounder. We hear that term a lot in acoustic descriptions, and sometimes it feels like a vague and inaccurate claim. We’re pleased to report that that’s really not the case here when we play the Mars.

The low end resonates satisfyingly through the Naked, ahem, body; deep but defined. It feels like the ideal bottom end for a dreadnought. The mids are strong without overshadowing chiming trebles, so the combination is a dreadnought that sounds big and balanced, just like a dreadnought should. Unsurprisingly, it’s pretty sensational for DADGAD Celtic melodies as a result.

The £500 price mark of the Faith presents a real dilemma to newer acoustic converts. Do you spend the extra for the solid woods and better spec? This guitar’s sound and build is a convincing argument in favour. But there are a couple of areas here where the bigger boys can rattle Faith: Fender’s Paramounts offer a hardcase where there’s no case at all here.

Taylor and Martin’s more slender-bodied and pricier candidates tend to come with action that’s a little lower and friendlier out of the box, in our experience. Nevertheless, the ‘all rounder’ feel of the Naked Mars here with Eggle’s X-bracing design is so compelling it really should be a serious consideration for anyone who is looking to get as much acoustic for their cash as possible.