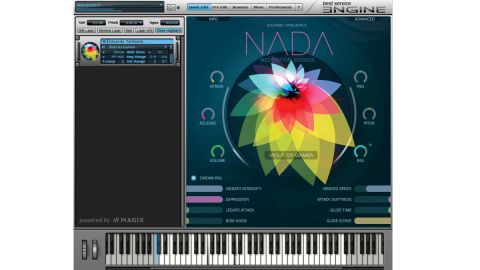 We really like this package. It hits the mark sonically, offers plenty of variety and is great fun to use.

If you produce soundtracks, work in sound design or just like basking in the glory of beautifully recorded sample sounds, then it’s highly likely you’ve encountered one of Eduardo Tarilonte’s sound libraries.

The Spanish native has an excellent ear for what works in these sorts of productions and always delivers something slightly unusual but at the same time eminently usable.

What’s more, the recording and programming quality is always top notch. Packages such as Celtic ERA, ERA II Medieval Legends and Shevannai The Voice Of Elves indicate his eclectic tastes, and those tastes take another interesting turn with the arrival of his latest release, NADA Meditation Sounds.

This may not be everyone’s first choice, but the underlying software, which is based on the Independence sample instrument, is an incredibly flexible and proven multitimbral instrument. What’s more, the Pro Edit screen provides plenty of options to edit patch playback, including modulators, envelopes, filters, insert effects and more.

From a sonic perspective, NADA’s meditation remit may seem pretty straightforward, and we all have a pretty good idea of the nature of the sounds required. Nevertheless, when you break it down you’re actually looking at quite specific instruments and sounds from a very broad range of musical sources.

Instruments include pitched percussion such as Tibetan singing bowls and balafon, woodwinds such as bamboo flutes and panpipes, and plenty of stringed options such as koto and tanpura drones. Meanwhile the voice patches include both real and synth options.

Unsurprisingly, the largest folder is pads (with around 200 patches) and within these you’ll also find a folder of arpeggiated and sequenced sounds.

NADA uses the Best Service Engine Quick Edit screen to provide a standardised instrument interface, and this is augmented by patch-specific parameters at the bottom and in an additional window if required.

Controls included in all patches sit either side of the large centre graphic and are Attack, Release, Volume, Pan, Pitch and Reverb. Each control includes an actual parameter readout (in milliseconds for Attack for example), so you can see what you’re changing.

Output meters surround the graphic, creating a sort of halo effect, and the overall image certainly captures the meditative mood of the sample set.

Each NADA patch has a bespoke Info panel that is accessed from the dropdown at the top. This includes a description of the patch and details of the underlying instrument and how it’s been played for the patch. It may also tell you what the additional controls do.

Additional controls vary and some patches have no extra controls at all, but typically they adjust key aspects in the patch that aren’t covered by the main parameters.

Despite the variation in source instruments NADA’s patches all have a consistency of purpose. Sometimes this is achieved simply by the addition of reverb, and peeling this away reveals a clean dry source sound. Sometimes it’s part of the patch programming itself, and the patch is very different to the sound it’s sourced from.

Either way, load up pretty much any patch and you’ll be presented with a rich, spacey, track-ready sound. Let’s take a look at some.

Meanwhile, from the Pianos folder the various Harmonic Piano patches (there are nine in total) and Dream Piano patches (of which there are six) are more akin to synths than they are pianos.

• Big Fish Audio Black and White bundle
In their stylistic juxtaposition and sheer sonic quality, Ambient Black & White make a very successful team, but inconsistent multisampling and an underpowered interface do rather let the side down. A sterling set let down by some frustrating niggles.

Next up strings: Viola Da Gamba is a lead instrument that can keyswitch between legato and polyphonic modes and has a number of adjustable parameters including vibrato speed and intensity, bow noise and glide time. It also includes an optional pad backing. The legato is achieved artificially, and in isolation this is quite obvious.

Even so, with the reverb engaged, the raspy bow noise sounds great. Switch the pad in and you’ve got a track-filling and quite beautiful string lead. There are plenty of very similar examples in the instrument folder including Koto, Bamboo Flute, Wooden Flute, Duduk and Hulusi.

In some cases, keyswitches are used to select different phrases, and some patches use velocity to trigger additional sounds within the patch. Voice patches are a mixture or real and synth-generated. We particularly like the keyswitch equipped Voices Of Light and the various sung phrases available in the Voices of Silence patch.

Pads range from the wonderfully rich Seren Strings and spaced-out Deep Peace, to patches that are texture-heavy and almost pitch-free such as Silence Is The Answer or Portal To The Unknown. Also, in many cases, one patch comes with a number of variants, which is a nice touch.

Rounding things off are 16 ‘nature’ pads that include sound effects ranging from birds and crickets to waves, streams and water drops. These could sound a bit cheesy, but they’ve been well programmed and you can usually adjust the nature sound levels to taste in the Quick Edit parameters.

At £179 NADA is not a cheap package, and one which is, by design, targeted at a specific genre and end user. However, its finesse is truly impressive and we think the sound set will also appeal to anyone who regularly uses evolving textures and atmospheric ethnic sounds.

What’s more, the instruments in NADA Meditation Sounds are just so ‘playable’; they invite you to get stuck in and start creating, and we think that’s the best praise that can be bestowed upon any software instrument.

MusicRadar verdict: We really like this package. It hits the mark sonically, offers plenty of variety and is great fun to use.

"Some sample libraries are generic in nature, boasting sounds fit for a variety of styles and contexts. Others are single-minded in their focus on a particular purpose. Nada is the latter. If you like to explore less frenetic and more thoughtful music you’d be hard-pushed to find something better than Nada."
MusicTech

"While NADA might not be a toolkit that every composer feels compelled to have within their virtual instrument arsenal, as a sonic palette for the creation of New Age or mediation music, it is both a joy to explore and can be completely self-contained."
Sound On Sound