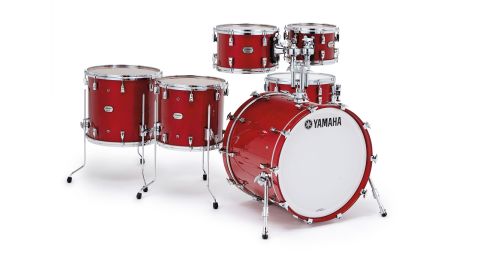 Exciting times for Yamaha's drum division as it continues to drive innovation in drumset development, just as it always has.

Over in China, Yamaha has gradually expanded its state-of-the-art, highly eco-conscious guitar, piano and wind instrument production since 1997. In July 2013 a long-held plan to develop a similarly cutting-edge drum facility was realised with a 200,000sq ft factory, Xiaoshan Yamaha, in Hangzhou, near Shanghai.

It really feels like Yamaha has embarked on a new era with this kit, there are so many purposeful innovations. First though, everything rests on the shell construction and the manner of this is something Yamaha had from the very first days, back in 1967.

In layering-up plies in a shell mould, historically seams would be vertically butted up, or overlapped, tapered and scarfed. But in 1967, following the Japanese principle of kashikomi, Yamaha introduced staggered diagonal seams. So when the air bag is inserted, putting pressure on the shell internally, the seams push down and out into the mould, creating a perfect extra-stable join.

Thus these shells could be made thinner without the need for reinforcing rings. Other companies eventually followed suit, but Yamaha was first.

However, Absolute Hybrid Maple takes another leap forward because of the constitution of the shells, which follows from the flagship Phoenix PHX series. Hybrid Maple shells consist of seven plies: paired maple plies inside and out, with a core triple sandwich of maple-wenge-maple.

Wenge is a particularly hard, dark African wood, often used in guitar manufacture. Indeed, it was the ability to draw on the company's expertise in guitar and piano making etc that enabled the drum division to move forward. Yamaha UK's Gavin Thomas explains that, "We found with the Phoenix that the majority of the sound vibrations come from the central ply.

"So [with the Absolute Hybrid] we wanted a dense musical wood with lots of resonance, [wenge] creating the majority of the tone and then softer wood [maple] outside to help that resonance - as it goes further out and loses energy it has less to push through."

Shells have 'optimised' bearing edges, 45° on toms and snare, 30° on bass drums. They are supremely finished and level. The insides of the shells are also coated with a vintage finish for a fraction more warmth. Outside there's a wide selection of colours and sparkles. It goes without saying the review kit in Red Autumn lacquer is flawlessly presented.

Next come the hook lugs, which were also originally designed for the PHX. The squared brackets hook over single posts and just by loosening each lug bolt a few turns the lugs come free and the whole hoop lifts off.

Hook lugs offer a viable alternative solution for nifty head changes, and despite the inherent conservatism of drummers, Yamaha has long persevered with them.

Up to now Yamaha would have planted the single posts right at the nodal points of the shell, precisely 22.4 percent of the way from top and bottom edges. At these points of minimal resonance the mounting posts interfere least with shell resonance.

However, Gavin reveals that Yamaha has taken another step, pinpointing unwanted shell frequencies. So the lugs are actually mounted slightly beyond the nodal points, effectively to 'eq' the drum.

Next, the tom holders, where we find the third generation YESS system (the first came in 1993). Where earlier YESS brackets were attached just at the top, this has an additional fixing point at the bottom.

Despite appearances there is no shell-to metal contact whatsoever. The mounting plate is attached to the shell by special grommets of extremely high-grade rubber, as used on Japan's 'bullet' train.

The grommet passes through the shell and is fixed on the inside and outside by two quite separate screws which make no contact. The result is that the tom is held just by the flexible high-grade rubber and is free to bounce around a little.

There is a single snare drum with a 14"x6" shell and 20 hook lugs. It's fitted with Yamaha's new piston strainer, seen previously on the Live Custom, an admirably chunky device which inspires confidence. Attached by cords are Yamaha's own 25-strand high carbon steel snare wires.

With the whole kit set up, the first time we rattle round the four toms - woah! the whole room shakes. As for the bass drum, it's a real chest thumper. With a firm mid-tuning, there is so much depth and rounded tone. Though Yamaha is keen to push the broad ranging tonal sensitivity of the drums, this is also undoubtedly one of the most lively of kits.

To gauge the impact of all those technical resonance innovations, we mount our own 1982 RC9000 (birch) 10"x8" tom on a dual stand next to the Maple Hybrid 10"x7". The RC has a birch shell with a pre-YESS clamp, so you'd expect a difference, but what we hear is dramatic.

The RC produces a (beautiful) focused tone, a fast peak and good sustain. The Hybrid has much more sustain and of a quite different kind. After the initial impact and momentary lull the note seems to amplify, to stretch out and grow, before slowly petering out. It's an all-round fuller sound with a more complex tone.

Maybe paradoxically, there's no problem with the small toms being mounted off the bass drum. The isolation of the YESS mounts is so effective and the bass drum yields so much 'oomph', there is no indication of its being constricted at all.

The aluminium die-cast hoops really come into their own with the snare drum. Being lightweight but solid they give the drum bright and ringy rim-shots and cross-sticks with just the right mixture of clang and sweet tone.

Like the toms the snare is resonant and expressive, crisp but with a fat tone, never losing that softer warm tinge of wood, sounding equally good whether tuned for heavy slogging or nimble skittering.