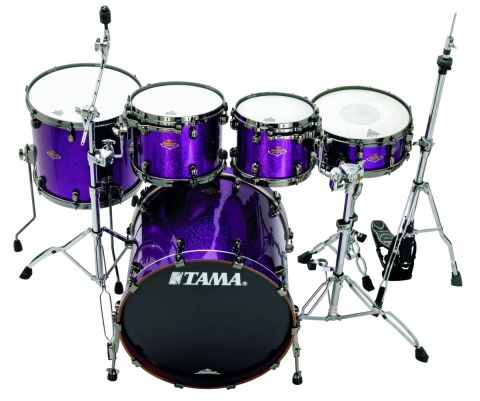 This is a top notch kit that you would expect to sound great, and it doesn't disappoint. The toms are richly melodic, the snare cranks it out and the kick thunders. The newly streamlined Star-Cast mounts are also a definite improvement. The use of bubinga makes a change from maple or birch and our only carp would be that if you're investing in a rare hardwood kit it would be nice to see it au naturel, rather than hiding it under lacquer.

Tama´s Starclassic is a stunning, well established series of drums. Starclassics have previously been offered with maple or birch shells and now Tama has added bubinga.

Bubinga is also known as African rosewood. It has a gorgeously deep, dark tinge with streaks of reddish brown and black and a fairly even, wavy grain. You can see this on the insides of the bass drum hoops and the inners of the shells. However, Tama has chosen to apply a range of coloured finishes to the drums - in the case of the review kit this is Ultra Violet, basically a purple and black sparkle lacquer.

The shells consist of eight plies of bubinga with a single outer ply of maple. Apparently the maple provides a better base for the application of the 15 different shell surfaces on offer.

To compliment your choice of shell colour Tama gives you the option of three metallic hardware finishes, Black Nickel, Brushed Nickel and Regular Chrome. The review kit features Black Nickel, a sort of smoky chrome which is undeniably attractive. What´s great about the plating is the way it is carried through to all parts of the mounting hardware and shell fittings, giving the whole kit a splendidly uniform appearance.

As for shell sizes, Tama offers a seemingly unlimited choice of toms ranging from 8” to 18” in diameter with no less than five different choices of shell depth. The latter encompasses the shallow Hyper-Drive, through Traditional Regular, Accel and Deep to X-tra Deep.

"There´s a thoughtful touch to the snare tensioning design. The butt end can be removed by unscrewing a couple of drum key bolts allowing you to change your bottom head without removing the Snappy Snare wires or losing your snare tension setting".

The toms are kept afloat by Tama´s Star-Cast mounting system. Isolation mounting systems are all very well, except that to make them strong they are often bulky and can restrict how you can position your toms. Tama has recently improved their Star-Cast system on both counts, by switching to aluminium so that the brackets are lighter and by streamlining the design.

The mounting bracket is contoured so that it snuggles right in under the actual die-cast rim of the drum. The result is that it actually makes it easier to position your toms closer together. What´s more, Tama claims you get an even truer tonal vibration. Finally, the Star-Cast mounts, which were previously a contrasting black and not the prettiest on the market, are now plated to match up with your drum´s shell fittings, lugs and rims.

While the Starclassic Maple has seven-ply shells, the Starclassic Bubinga has nine-ply shells. Bubinga is said to be around 50 percent more dense than maple or birch and you certainly notice the extra weight of each drum, even with its lightened aluminium bracket. A thicker, denser shell should add both volume and top end to the sound.

Tama claims the wood also adds more bottom-end, the result being the best of both worlds - depth and cut without middling frequencies muddying the picture. It´s a typically boastful case of manufacturer´s hyperbole, but for once we´re inclined to go along with it.

We took the accompanying snare drum - a 14”x5½” model in matching bubinga and purple - out on a couple of gigs and it turned out to be a cracker - this one really does ping. It is helped by the heavy die-cast rims and the relatively thick shell, which again makes the drum surprisingly weighty. Rim shots rang out piercingly while the centre backbeat was thick and deep, at the same time easily retaining a clean, sharp definition. It´s a very satisfying snare.

There´s a thoughtful touch to the snare tensioning design. The butt end can be removed by unscrewing a couple of drum key bolts allowing you to change your bottom head without removing the Snappy Snare wires or losing your snare tension setting.

Like the snare, the toms pack a punch. The bubinga has a clean tone, maybe not so warm as maple, but nicely rounded and full. The heavy shells increase volume and aid projection.

The bass drum is the now almost standard 22”x18”, a pretty big drum with plenty of volume and depth. It arrived with both heads intact and stuffed with internal damping, making the sound dark and concise, deep and warm with maximum attack.

The hardware fitted to the bass drum is also worth a mention. The new Starclassic claw hooks feature rubber spacers that help protect the wooden hoops from damage. The hooks and hoops are integrated so they can´t separate, even on loose tunings.

As with all it´s hardware Tama has given a lot of thought to the bass drum spurs. They have 10 calibrations which allow you to get the exact length of spur extension, making it easy to level up your bass drum precisely on each side of the drum. For a final touch, you can cover up the spike of each spur with its rubber foot as usual, but what´s pleasing about the design is the way the large locking wingnut encloses the rubber foot.

It´s chic design touches such as these that make you feel good about spending such a large sum of money.