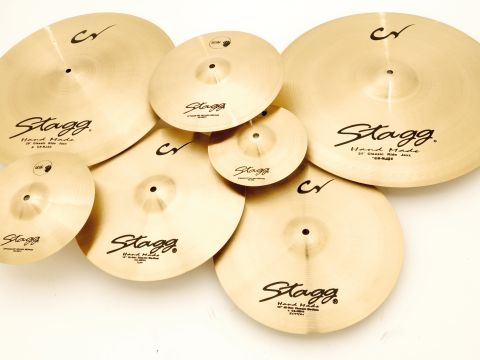 The two rides are better than any Staggs we've previously tried and comparable with top-price Western cymbals, while the hand splashes are fantastic value. The hats are also cool if you're looking for something not too edgy. When compared with nearly all budget B8s - for which you can pay the same sort of prices - there is simply no contest.

Stagg was the first Chinese company to send over Turkish-American-style cymbals to the West, about 13 years ago. They caused a stir since they were hand-hammered B20 cymbals - and they were dirt cheap. The cheek of it! At first it was hard to believe. Some of them sounded almost as good as the American and European platters we were used to paying at least twice as much for.

Stagg now offers half-a-dozen different lines, most of which are B20 and hand-made, besides the handful of new additions to the Classic series on review. Previous Classics included thin and medium-thin crashes alongside, curiously, three flat rides. Here we have rides, splashes and hi-hats.

Classic in name, classic in appearance. All the Classic cymbals are satin buffed, standard profile with quite prominent domed bells, regular lathing top and bottom and discreet hammering. This all evokes standard 'A' Zildjians (or Sabian AAs). Even the logo is similar to the Avedis script 'A'.

Evidently the 'classic' that Stagg wishes to conjure up is the old-school, medium weight Turkish-American cymbal, before the modern era of dozens of types and denominations confused matters.

The rides proudly proclaim 'hand made' on their surface. The quality of finish is now on a par with American and European cymbals, too. The stencilled writing on the cymbal surface is a little blurry though, not quite as slick as on more expensive cymbals. This is a shame as cosmetics make a big impression. Other than that, you wouldn't know these cymbals from top Western makes.

The two rides are on the light side of medium. There's that almost metallic sticking clarity that makes you think you're using nylon tips when you're not. We got hold of a couple of older rides for comparison - and we have to say these two new Classics are much better.

They are more complex, with more body, yet feel smoother and don't have unwelcome overtones to set your teeth grinding. The slow decay wavers between high and low tones but does not offend, gradually dying away to a deep and satisfying sizzle. The overall pitch is deeper than average with a bright edge from the stick tip riding over the top of a full yet controlled wash. The bells are distinct, ripe and powerful.

Although designated as rides, we see them as crash rides in the old-fashioned sense. Crash either cymbal and you get a beautiful, deep, rich and clean 'whoosh' - gone is any hint of trashiness from previous models. The 20" is the obvious all-rounder but we find ourselves drawn to the 21", which is a little darker and, if anything, smoother.

The three tiddlers are described as 'Hand-Hit Splashes'. The point being that, although medium weight, they respond easily to a brisk tap with your middle finger. There are three diameters - 8", 10" and 12" - but the bell is the same size on each. As is normal with splashes, there's a bit of a dinner-gong clang due to the bell comprising a much greater proportion of the whole cymbal than in larger diameter crashes.

Since the bells are the same size on all three, the ding is most noticeable on the smallest, the 8". It's not at all unpleasant though. The merest flick of your mitt elicits a full response - a high-pitched, fruity 'ding' followed by a nice hissy splash with good sustain. The 12" has a surprising amount of crash/body to it, while the 10" is a good balance of both gong and crash - our favourite.

For the price, they are absolutely brilliant. Of course, they can be played by stick, just don't overdo it. A glancing cuff from a medium or lightweight stick is all that's needed, and you'll be well impressed.

The 14" hats were also traditional in being deep and not too edgy. The closed sound is relatively soft if you're used to more modern, aggressive hats. It's a cultured and pleasant tone though. They don't have quite the same chutzpah as the other cymbals reviewed here, but they come into their own when you play (or try to play) Buddy Rich-type intro figures. You get that authoritative steamy splash without it being strident.

The pedalled 'chick' is deep again, not too loud, but okay so long as you make sure the bottom cymbal is angled a bit.