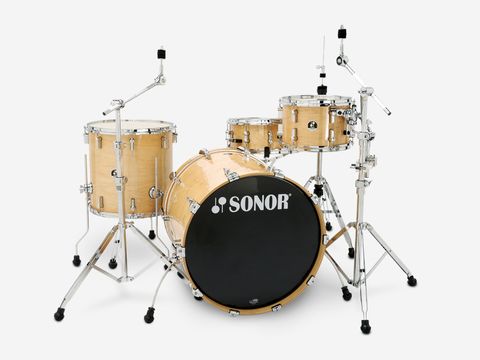 Sonor offers plenty of choice in its ranges and the 3007 is the star of the semi-pro bracket. It could easily pass for a pro kit and you'll have to look very closely to spot where savings are made.

Sonor's 3007 sits at the top of the extensive Force series, which also features the 2007, 1007 and 507. The 3007 spec is basically unchanged for the past two years, but now some new finishes have been added.

Although made in China, the 7-ply shells have outer and inner plies of Canadian maple. OK, the inner core is Chinese maple, but that's hardly going to make any difference.

Construction is via Sonor's proprietary Cross Laminated Tension Free process (CLTF) and the quality of the Canadian maple is evidenced by the natural lacquered review kit which has a pronounced swirly grain. All the shells have sharp 45° bearing edges with the tiniest of round-overs to the outside edge. Bass drum hoops are smoothly rounded and lacquered to match the shells.

Supplied heads are Remo's budget UTs, also made in China. The toms have Ambassador style clear batters and resonants, while the kick has a Powerstroke-3 style edge-damped batter, coupled with a fully intact black logo head to the fore.

Completing the kit is a generous 400 series hardware pack. The single chain drive bass pedal has a direct, tight feel so the double-sided felt or plastic beater delivers a firm wallop. There's an adjustable toe stop and the large base plate has a complete, non-slip, ribbed rubber underlay.

The jaw clamp also has a plastic grip to protect your bass drum hoop. The matching hi-hat has a swivel footboard to ease positioning if you use a double pedal etc. Bottom cymbal angle is controlled by a cleverly designed click-stop tilter knob.

A similar thumb-grip knob allows adjustment of spring tension, while the pull rod is hexagonal so the top cymbal is clamped more securely.

We also liked the fact the snare stand has a gear-angled basket which is only slightly offset from the central post, making it easier to position.

The package is completed by two mini boom stands, though 'mini' refers only to the boom arm which is about 35cm (14") long. Everything else about the stands is 'maxi' and, in keeping with Sonor's reputation, sturdy enough for a pro kit. They're thick-set and stable with huge rubber feet, stout, double-braced tripods and extra thick tubes.

The bass drum is undrilled and a bracket is supplied to mount the small tom to a cymbal stand. The tom itself is fitted with a TARS (Total Acoustic Resonance) bracket. This is a 'T' shaped, three-point plate which attaches to two of the tom's tension rods and is anchored at the bottom of the T to the shell itself.

The 3007 is Sonor's top semi-pro kit, but it's increasingly hard to distinguish from a pro set. Savings are made in small details: the slightly thin chrome on the bass drum claws, the perfunctory casting of the bass drum/hi-hat pedal frame posts, budget heads and Chinese maple filler. Such economies have a negligible effect on the sound and make only a small difference to the build quality.

Sonor advertises the 3007 series now with shallow, 'quick' toms - the latest fashion. But the toms with this particular kit are simply classic sizes: 12"x8" and 16"x16".

As for the bass drum, if shallow toms are 'quick' then super-deep bass drums must be what, 'slow'? Deep kicks pander to the other current trend, but as we write we have this monster 22"x20" set up next to Sonor's 3007 Jungle kit with its 16"x16" kick and, to be honest, we prefer the latter.

Sure it has a relatively high crack, but it still has surprising body. We will concede that for a big stage rock band, the 20" deep version delivers a majestic, and loud, sound. Being so deep, it's easy to play with the front head left un-holed.

There is negligible kick-back if you bury the beater, and the note is so deep there are no awkward high overtones to damp. The problem for most will be lugging it around.

Overall, the drum has that crisp maple tone that suits most styles from rock to jazz. While some drums have a dead spot in the centre, this one is conspicuously bright and responsive in the middle. There's a 2.3mm Power Hoop on the batter side for extra bite on side-sticks and rim shots.

The neat, hi-tech looking black plastic throw-off has a sturdy, comfortable lever, although the tension knob is too small. The butt end protrudes 2.5cm (1") from the shell, helping the snares to lie flat.

Still, it's an agreeable kit to tune. The idea behind the Tune-Safe lugs is that they have extra grip and won't vibrate loose under a heavy assault. This type of lug is becoming increasingly common, which is understandable and yet sometimes annoying, because when seating a new head you can no longer finger-tighten the lugs.

With Tune-Safe though, you can. Mounting the bass drum heads, for example, we were able to spin the lug bolts quite easily up to the finger-tight point where they start to grip. After that it requires a firm key action, but that's fine.