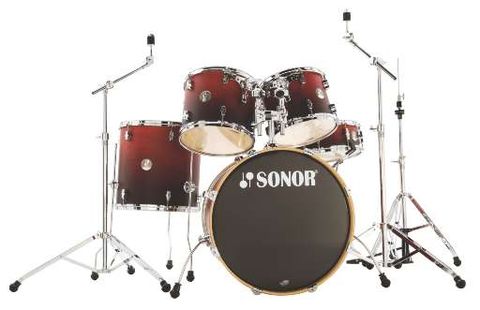 This is a very well built kit and all the individual components have a reassuring solidity to them, as do the stands. The lacquer finish is of a high standard and in general, the drums sound great. The only real negative points are the few obvious areas of economy (the lugs on the floor tom, for example), the stubbornly long toms and the snare's performance not matching those of the other drums.

Sonor's Chinese-manufactured Force series of kits have successfully brought the German brand to more affordable reaches of the market. While Sonor's high-end drums are rightly revered, the Force kits have been designed to be competitive in hotly contested price points.

The two top Force lines enjoy the distinction of being made of single woods (as opposed to a composite sandwich), maple in the case of the 3005, while the 2005 is 100 percent birch.

Year of the drum

The Force 2005 series is available as four different kits, which each come complete with a set of Sonor stands and pedals. The identically priced set ups are marketed under the names Stage 1, Stage 2, Fusion 1 and Studio. The review kit is the Stage 1 variant and comprises a 22"x17½" bass drum, matching birch 14"x5½" snare drum, 12"x10" and 13"x11" toms and a 16"x16" floor tom.

The other kit options mix different tom selections with the 22" kick, except the Studio kit, which features a 20"x17½" bass drum. Extra drums available include 8" and 10" toms, a jazzy 18"x16" kick and a steel shelled snare. All of the toms offered are on the deep side, with no provision for shorter or quick-sized toms being made.

The drums are all made from nine plies of birch and stand at 7.2mm deep. Sonor's Chinese factory operates to the sort of standard that you would associate with the brand. The shells are well made and the details, such as the bearing edges, have been attended to with care. The shells are simply sanded inside.

There is a choice of five matt lacquer finishes ranging from plain Wax Natural to the altogether darker Wax Midnight Black. The option that graces our kit is a fiery fade known as Wax Cherry Red. Beginning with the deepest of blood reds that is almost black, the colour gradually fades to a lighter red that allows the grain to show through.

Even at its lightest, the shade of red is still pleasingly dark, which suits the understated feel of the matt lacquer perfectly.

Familiarly chunky Sonor lugs (featuring the company's twin beater logo) are fitted to the drums. The lugs are fixed directly to the shells, with no rubber washer or gasket to cushion the contact. The lugs have clearly been designed to sit smoothly and not dig into the shell.

We did unscrew a couple of lugs to examine the state of the shell beneath, but there was no trace of the imprint that you might have expected to find. The allocation of lugs is much as you would expect at this level - eight for the snare, eight for the bass drum and six for each of the rack toms - except for the floor tom, which sports a miserly six.

The shell hardware is well up to scratch, with the hoops being on the stout side and the tuning rods turning cleanly but with enough resistance to secure tuning. A full set of Remo heads is fitted across the kit.

Matching wooden hoops complete the bass drum, which is further enhanced by Sonor's swing-out spurs, which curve around the shell of the drum when not in use and swing down to engage. Huge circular rubber feet (which conceal meaty spikes - extremely useful on slippery stages) prevent them from harming the lacquer finish.

When they were locked into place they managed to hold the drum solidly - during a gig the bass drum didn't move a millimetre.

Sonor's Total Acoustic Resonance (TAR) mounts are used to hang the toms by. Like many similar mounts they attach to the tuning rods of each tom, but what is unusual is that they also have a third arm bolted to the shell about halfway down each drum. We couldn't help wondering about whether such a system might encourage a possibly stifling effect, but Sonor's track record in devising engineering solutions is a long and impressive one and the company claims the TAR mounts provide 'vibration free resonance quality'.

What really matters is how the drums sound and to our ears there is not a lot wrong with the toms. There is the cleanness of birch that you would expect and a further punch is present courtesy of the density of ply. They tune up to a resonant but controlled note and any overtones are easily banished with a few turns of a drum key.

The floor tom gives vent to similarly buoyant blasts of birchness. The floor tom legs deserve a mention of their own for their superior length - it is possible to raise the playing head up to seated eye level. It makes a change to be indulged with overly long legs for once.

The bass drum gives a lovely deep note that remains taut and focused. There is an overall dryness to it that helps it carry well acoustically and it also responds favourably to miking.

In comparison to the rest of the kit, the snare didn't fare quite so well. While being crisp and bright, it lacked any deeper versatility. Working best at higher tunings, it possessed a metallic edge that was shrill rather than cutting and proved difficult to shift. swapping the snare wires for a better set would probably transform the drum into something far more useable.

The supplied hardware pack is composed of suitably hefty stands. All of them feature double-braced tripods, the legs of which are tipped with the same round rubber feet found on the bass drum spurs. The bass drum pedal is reminiscent of Sonor's mind boggling Giant Step pedal and is sleek and fast.

The hi-hat stand shares the same distinctive footplate as the bass drum pedal but offers little in the way of adjustment. It does contain a toe stop though, which is always a good thing.