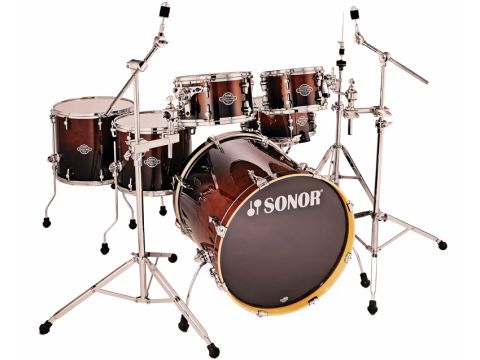 Sonor have retained many of the aspects which gave them their reputation for building superbly crafted drums. This kit is no exception - well-built, beautifully finished and sounding good.

The Force series remains a healthy line for Sonor. Now there is an even wider choice of drums, several significant upgrades and the numerical suffix has finally been ditched - a move which will help clear up confusion over the kits' origins and year of manufacture.

Pitched at the top end of the Force series are the mid-range offerings with the Select Force (formerly 3007), constructed from maple, and its birch counterpart the Essential Force (formerly 2007).

"The sheer articulation of the suspended toms takes us completely by surprise."

The starter kits are represented by the Smart Force kits (formerly 507), and Smart Force Xtend (with a set of starter cymbals and an extra cymbal stand included), which are each made from poplar.

Also included is a tasty six-piece double-braced hardware set with the familiar half-moon nuts and bulbous rubber feet. There are stands for hi-hat and snare, two boom-type cymbal stands, SP473 bass drum pedal (with dual-sided beater) and a set of resin ball-type mounts with multi-clamps for each of the rack toms.

This Essential Force S-Drive model is the largest (in terms of quantity of drums), set-up of five 'preconfigured' kits available from Sonor. However, there is a choice of 15 additional individual drums and hardware to purchase separately, so your kit could grow even larger and then some!

Each of the kits and individual drums come with a choice of six finishes: Brown Fade (as with review model), Amber Fade, Green Fade, Blue Fade, Birch and Piano Black. Though for the pleasure of revelling in the visual delights of a 'fade' finish, there is a slight price increase due to the extra work involved.

This 'S-Drive' configuration includes a comparatively huge (actually there is no comparison really, it really is huge!), undrilled bass drum, measuring 22-inch in diameter with a whopping 20-inch depth.

Conversely the toms are of the 'quick' variety with a diminutive depth (similar to those of Tama's Superstar EFX Hyper-Drive and Premier's Genista Fusion kits), where the reduced distance between the batter and resonant heads will usually produce a more immediate stick response.

As a bonus it also effectively decreases the overall total height of the kit, allowing improved ergonomics for those who prefer a lower set-up.

Each shell is constructed from six plies of birch employing a proprietary method called CLTF or Cross Laminated Tension Free, which Sonor claims will give maximum strength and perfect roundness.

The shells have been precision machined with a fairly standard 45° bearing edge, but there is also a minute counter-cut at the extreme outer edge of the shell. This creates a sharp-peaked tip of the bearing edge, producing a minimal contact point for each drum head.

Many upgrades are featured within the new Force series, including rubber gaskets on the bass drum claws, memory locks on bass drum spurs, metal badge, metal snare mechanism (as opposed to the plastic of previous models).

By far the most significant upgrade, however, lies with the unique and typically Sonor-esque lugs which have a cunning bridged-style design, reducing the footprint and keeping them reasonably lightweight.

Each lug features Sonor's excellent anti-detuning 'TuneSafe' system which grips each tension rod around the lower portion of the thread internally by a nylon insert.

The lower portion of this bracket is attached via a single fixing bolt which keeps the whole assembly rigid. This is really quite unusual as many manufacturers simply suspend their mounts from the top portion of these RIMS-type mounts.

Exactly the same style hinged clamp is found on the two suspended toms, floor toms and bass drum spurs. Sonor demonstrates its confidence in their effectiveness as the floor tom legs have no knurling and simply rely on the superior grip these clamps offer and are able to maintain.

Apart from the bass drum and the larger of the two floor toms, each of the other drums comes ready-assembled. When it came to the tuning bolts on the bass drum there was some resistance from the TuneSafe system, too much for the fingers alone, so we resorted to our Gibraltar RoboKey which has a 4-1 turning ratio, making the assembly job that much quicker.

The rest of the kit simply required a tap and a tweak with a standard drum key to tune, with each drum coming up to pitch quickly and easily.

Right from the count of four, the drums have our mouths watering - the sheer articulation of the suspended toms takes us completely by surprise. It's one of those "did we do that?" moments when the sticks give such a sweet rebound, the double strokes appear to pour from the wrists.

The sound produced is equally pleasing with the smaller-depth toms freely giving up their birch bite, ably chomping through the extraordinary sub-bass emanating from the kick drum.

A similarly rapid response was least expected from the kick (bearing in mind the head-to-head resistance mentioned earlier), but as both heads had been tensioned way above the wrinkled stage, this does seem to produce a terrific response in conjunction with the smooth action of the SP473 pedal itself, without any bottom-end compromise.

The snare proves to be the perfect adversary to the rest of the kit, having plenty of body at a lower tuning. Tweaked up, with a single twist of a key and a 5B hurtling towards the head, it provides an authoritative cut while maintaining plenty of body.

The 16-strand snare is only just about able to satisfy those buzz rolls and grace notes and we would like to hear this drum with something a little more substantial.

Much of the overall sound of the drum comes from the drum head itself and these drums especially, as they feature such a sharp bearing edge, rely heavily on the actual sound of the head - this kit warrants a better quality head. So try some decent Remo Ambassadors or Evans G1s and the kit will become a killer.