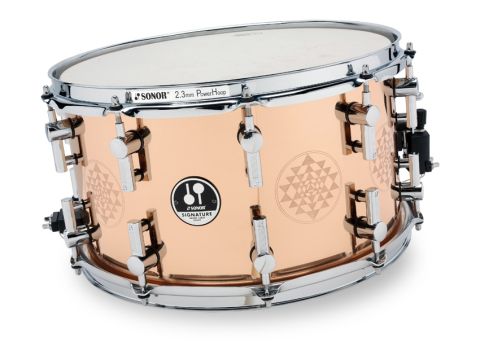 Bristling with more character (both sonic and aesthetic) than any do-it-all-rounder and that's just as it should be. Die-hard Danny fans will love it, but it deserves a wider audience than that. Provided their snare stands drop low enough…

Tool's Danny Carey is very much a 'ticks all the right boxes' drummer. Not only does the man possess phenomenal technique, his groove is impeccable and, just for good measure, he has the tone of his kit nailed.

Of course there are myriad factors involved in creating a drum sound in the studio and on stage. But it all starts with the instruments themselves and, given Danny's characterful and immediately identifiable tone, interest in his new Sonor Signature snare has been raging since its announcement.

The basis of Danny's new drum (the first in a promised series of Sonor Signature instruments) is a 1mm thick bronze shell measuring a fairly monstrous 14"x8". Danny's a big guy with a big sound, so no surprises there, but be aware that you'll need a snare stand that goes low enough to position the drum satisfactorily if you're less of a towering presence than DC.

Shell furniture is fairly standard stuff - something that has kept the retail price sensible; while there's nothing necessarily to blow you away here, it's all perfectly decent.

Triple-flanged 2.3mm hoops are teamed with Artist Series lugs, a spec decision that Sonor reckons allows the snare to breathe openly. Die-cast hoops may be posher, but the company evidently had an eye on ensuring that the 8" depth doesn't contribute too much 'tubbiness' to the sonic response.

Fancy finishing is limited to Danny's signature next to the soundhole and a series of 'talisman' logos between the lugs. A simple, yet nicely-styled and executed snare that does Danny's tasteful playing style justice. And working elements like strainer and tuning rods are rock solid and smooth.

The very first thing that makes an impression is the weight of the bronze beastie. It's significant, but having said that, it's not completely unwieldy - a shell thicker than 1mm would be back-breaking, though. Any weight penalty is easy to forgive once the drum is in action, however.

Sonor has done a fine job of serving up a more open tone than you might expect from such depth, but equally there's focus and punch enough to carry every backbeat through a mix. Tuned high, the zing of the shell makes for a surprisingly funky performer, but dropping the tension is where the real fat, full-bodied rock fun is to be had.

Even here, the 20-strand snare wires are easy to coax into life. It'll never be a first choice for crisp pop-funk, but there's a good deal of responsiveness here.