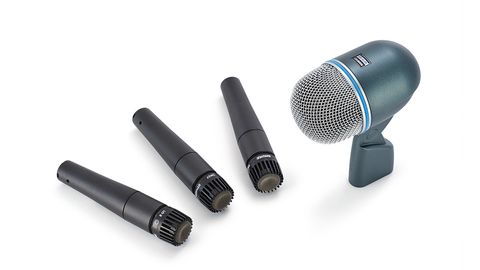 Choice and versatility of positioning whilst maximising valuable floor-space means not only an easier set up but also a much tidier one. Plus, you can't go wrong with an SM57 or a Beta 52.

Having been impressed with the quality of Shure's new PG Alta microphone range in recent months, we now delve eagerly into the industry leader's latest drum- specific offering - the new DMK57-52 mic set.

Perhaps not quite such a catchy product name but it does exactly what it says on the tin. Aptly named due to its contents of three industry-standard SM57 instrument mics and a Beta 52A bass drum mic.

The former is a world famous workhorse of a dynamic microphone, ideal for recording your snare and toms but will also work wonders for your hi-hats or even sound great used as an overhead.

The latter should also require little introduction; another professional favourite both on stage and in the studio due to its low-frequency response (starting at 20Hz) and durable design.

So, nothing out of the ordinary to report here as of yet. The real fun starts with the included A56D mounting systems (one for each SM57). These black metal clamps are designed as a rugged replacement for the typical plastic clips often supplied with drum mic sets.

The compact system uses two separate pieces which open and close in a jaw-like motion, controlled by a single adjustable bolt. Once clamped, the additional hex-shaped 'L-adaptor extension' is placed in position (either vertically or horizontally) and the mic clip screwed onto the top using either of the included small or large lock nuts.

Interestingly though, the second piece can be completely removed and reattached in a different configuration which instantly gives it the ability to clamp to a cymbal stand, music stand, mic stand or anything else you fancy.

Due to the versatility in the positioning of the A56D clamps, it is easy to find a favourable location for the 57s despite their length. The hex shape of the L-rod ensures a firm grip to the rim with absolutely no budge at all (when we pulled on the one attached to the rack tom, the kit threatened to topple over before the clip moved a millimetre) although it does slightly limit the angling possibilities.

The jaws open plenty wide, which is accommodating for deep rim sizes and bulky cymbal stands. After an initial bit of clumsy fiddling with the mounts, it soon becomes a piece of cake to quickly find the mics positioned beautifully on the kit.

Anyone who has experience with SM57s will know that they are famous for the grills rattling. The classic engineer's trick is to wrap tape around the neck in a bid to quell the unwanted noise. With no tape to hand, this became an issue with the 57 clamped to the floor tom. On the plus-side though, the clamp was quickly adapted and used with half of an old cymbal stand found in the corner of the studio.