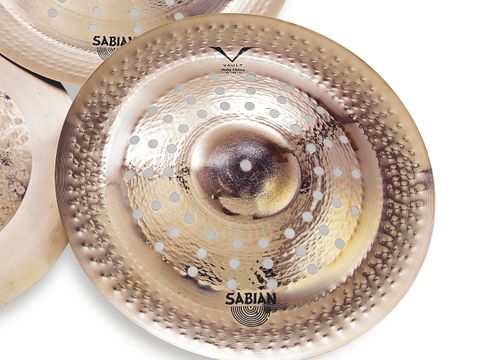 Chad Smith's Holy Chinas have fulfilled his original brief and excel in '11 and over' situations. Playing one will leave you at risk of uttering a Holy 'pardon?' for days afterwards.

Available in 19" and 21" diameters and cast from B20 bronze, both models have raw bells, high profiles and wide lips.

With their blinding finish and numerous perforations, the Holy Chinas have an aura of menace about them.

The looks don't deceive, and while note-wise the cymbals are authentically trashy and china-like, the degree of volume and aggression contained within them is almost off the scale.

Ear-shredding levels of attack mean that they don't so much slice through the mix as blast a hole in it. A tap of a stick results in a shiver of electric intensity; a full-blooded hit practically illuminates the room.

The 19" model is quicker and sharper-sounding, while the 21" is the equivalent of a cymbal wipeout.