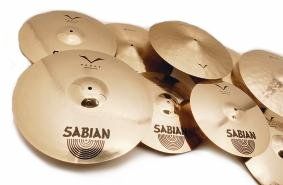 The Vault crashes are exceptionally clean, bright and transparent, and will surely have a broad appeal. The Vault Artisan rides are very special - the 20" Light ride was a wonderful cymbal with a spectacular, tone-rich bell. Finally, the stick response is extremely articulated, standing clear of the deep, searingly broad 'tahhh', which you only ever hear on a very expensive cymbal.

The word 'Vault' conjures up an image of a cache of vintage cymbals that Sabian has kept shored up in its cellars for decades, while 'Artisan' hints at experience and craftsmanship. These are popular themes in recent years, with every cymbal company working to produce that perfect, old-school, dark, slightly trashy ride.

But while the Artisan rides have an undeniably traditional vibe, the Vault crashes have an altogether more modern appearance and sound. Diversity seems to be the key to the Vault banner. Sabian says there will be "no limitations in terms of looks or sounds" to the Vault collection.

In the past, Sabian has taken a load of prototype Vault cymbals out on tour to garner feedback from its customers. The conclusion was that "because player needs are diverse and always changing, the Vault collection will be ongoing and open-ended in terms of model additions." In other words, Vault cymbals are designed to reflect the wishes and needs of Sabian's customers and endorsees.

And they draw on the ability of Sabian's craftsmen to fashion cymbals relevant to what players want to play, now and in the future. We're not sure how this differs much from the market research any smart company normally does - but we get the picture.

The sound of silver

Vault cymbals are crafted from Sabian's finest B20 bronze. This alloy is always described as containing a trace of silver. I was assumed that the silver was the 'magic' added ingredient. Apparently not. Silver is present in unrefined copper, and most companies actually extract it by electrolysis.

Sabian, however, uses the older method of 'fire refining' which leaves the silver embedded in the copper. Needless to say, Sabian reckons that the silver improves the sound. And the Vault cymbals are somehow crafted to make a particular feature of the silver, the ingredient that emphasises the 'tsss' sibilance.

There is a range of five crashes from 16" to 20", all in Brilliant finish, with fine lathing top and bottom. They bear the usual Sabian logo, plus the big 'V' for Vault logo. They are quite thin, with slightly enlarged bells for added volume. What generally happens with crashes is that you get a high-pitched initial 'tsshh' that quickly dies and is followed by a deeper after-tone.

With the Vault crashes, it's noticeable that the initial 'tsshh' is bright, smooth and silvery, with a rising pitch, but the after-tone is not as deep as usual. This makes the cymbals very clean and toppy, although luckily there's still plenty of body. The fine pin lathing increases the top end so that, although the cymbals are quite lightweight, they nevertheless have a pitch that's higher than usual.

They are very bright, shimmery and punchy, without being brash. They also have good sustain following the initial fast crash. And being thin, they respond well at low volumes, as well as high. So they are capable of being both sensitive and powerful.

There is good consistency across the range, so whichever size(s) you choose, you shouldn't be disappointed. We loved the 16", which is lightning fast and super clean, almost like a splash cymbal, while the 18" and 19" appealed because they are large without being too deep.

The Artisan rides come as either a Light or Medium 20" or 22" in normal or Brilliant finishes. For review we have 20" and 22" Light and Medium cymbals in normal finish, plus a single 22" Medium in the Brilliant finish.

If the Vault crashes are toppy and transparent, the Artisan rides are dark and mysterious. They are also the most expensive cymbals Sabian makes and will be offered in limited, serial-numbered quantities. This is all because they require oodles of labour and skill, undergoing extensive, traditional 'high-density' hammering, not to mention 'jumbo' hammering (which apparently boosts the low end response).

The extra hammering results in the cymbal being hyper responsive across its entire surface - no dull spots. This is certainly true - the 20" Light ride, the first cymbal we went for, felt electric. It was buzzing over the entire surface, brimming with life. The sound was soft and deep, and a little bit trashy, with great spread - and yet the stick clarity was exceptional.

There was a real 'tick' to every ride stroke that seemed to be amplified above the background wash.

This was more apparent with the two Light cymbals - the 20" and 22" - than with the other three Mediums. It gives you a great musical feel, and lends the cymbals versatility. While the 20" Light remained favourite, the 22" Light has the same properties, but in greater degrees. As a result, it takes some controlling, and you'll either revel in it or find it a handful.

Near the edge, it reverberates and wobbles, and you can easily crash it with the tip of a light stick. To summarise, the two Light cymbals have a softer sound and more spread as a result of being thinner. They also have less constricted bell tones for the same reason.

As for the single Brilliant finish 22" Medium, this was the favourite of the three 22"s. The reason is that it seems to have marginally more initial impact and definition. It's more concise and lower in pitch than the normal finish Medium. It's really a matter of personal taste though, since all these cymbals are very classy indeed.