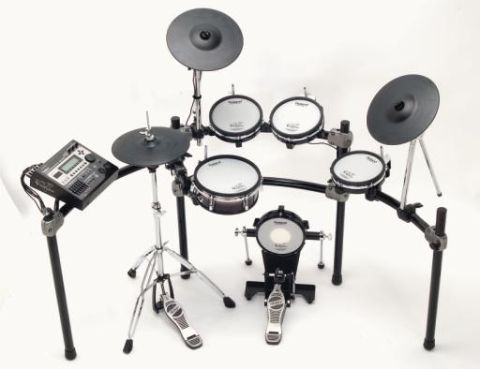 The TD-20K is a killer, but the TD-12K is a far more realistic option in terms of price. It doesn´t give too much away in meeting its mid-range price point and in some ways it´s just as impressive as the 20. The borrowing of the TD-20´s sonic engine does the 12 some big favours. Add to that flexibility, playability, and build quality, and the TD-12K offers a completely rewarding experience.

Killjoys and whingers are always whining on about the pointlessness of flagship products. You know the kind of thing - cars that can do twice the speed limit and flat-screen TVs that cost three times as much as a mortgage payment.

What 's the point of all this flash, consumerist nonsense, they ask? After all, no one can drive any faster than 70mph in the UK and you can enjoy your favourite TV show on a basic 14" colour portable. Well of course that's all nonsense.

Okay, sometimes flagship goods offer features that, strictly speaking, we don't need - but then that's the point. These super-expensive, range-topping products are created to push boundaries, to let designers have free rein to see where they can take a concept. And, ultimately, the features that they boast have a habit of trickling down to more affordable, everyday offerings that the public at large can enjoy.

Take the launch of the Roland TD-20K electronic drum set, for example. Launched at £5,000, the setup was a long way outside what most of us will ever stump up for a rig. And some of the features - the ability to choose from a raft of shell types and depths for each drum in a kit and so on - were esoteric and very much icing-on-the-cake rather than basic essentials. But look what happened - just a year after the introduction of the big boy of the range, the TD-20K was joined by a less wallet-pummelling version, the TD-12K. Which just happens to sport some of the good stuff first seen in the top-of-the-ranger.

Unveiled as a replacement for the popular TD-8K, the 12 is sold heavily on the fact that it boasts the same sound quality as the TD-20. Given that the TD-20 is an enormously impressive module, capable of the most realistic, natural modelled acoustic sounds of any such offering, the hopes for the TD-12 are high. In addition, the TD-12K (the K signifying the setup based around the TD-12 brain) includes the VH-11 floating hi-hat, a unit that mounts on a standard hi-hat stand for better hi-hat feel than with pad/foot controller arrangements.

The rest of the playing surfaces are similarly well-specified. Mesh-pads (including a 10" snare pad that supercedes the TD-8K's 8" version) appear in all 'drum' positions and a pair of CY-12R/C pads handle crash and ride duties. Pads and brain are all mounted on the imposing new MBS-12 rack which scores highly with us on a number of fronts. First of all it looks pretty sexy (as much as a collection of black metal tubes can look sexy at least) and there's an air of effortless sturdiness about it.

The various clamps are slick in operation and as solid as the main rack and, perhaps best of all, all cabling is concealed (well, apart from the ends of course) in the tubes themselves. So once you've figured out where the pad holders should go, which leads go in which holes and where the brain is best positioned, your first efforts are rewarded with a kit that looks every bit the professional setup it is.

The initial build will take some time, there's no escaping that, but the quality of design and construction means that once you've got a handle on how it all goes together, subsequent breakdowns and re-rigs will be as fuss-free and quick as they can be for this kind of product.

Also commendably unfussy is the operation of the excellent TD-12 itself. For such a complex, capable unit, it proves relatively straightforward to use, even without recourse to a manual. Delving into deep editing - for which there's plenty of scope - clearly requires some reference reading, but in terms of getting some sounds happening and tweaking them to suit your needs, it is all pretty intuitive.

The big old LCD screen on the face of the unit helps enormously on this front - there's no deciphering of cryptic characters here - and on a dark stage the screen will be a real boon. Other front panel features are also included to make stage use a painless experience; six faders are provided to give instant control over the volume of kick, snare, toms, hi-hat, crash and ride and the +/- buttons used to call up different kits are large enough to be whacked with a stick between songs.

The display also helps you out a fair bit - the function buttons beneath it take on different roles depending on what page you are editing, making it fairly simple to navigate and tailor effects settings, drum parameters and so on.

Choosing which parameters to edit is rather more taxing, given the vast choice on offer. As with the TD-20, the TD-12 allows you to pick from a massive palette of COSM-modelled parameters, from shell size and material to head and muffling options for each drum in a kit. Then there are other things to consider like mic positioning, room type, reverb options and so on and so forth.

The good news is that all this choice amounts to a wonderfully flexible kit. It's not as all-conquering as the TD-20K, but the TD-12K punches above its weight. Thanks to features like Interval Control, which subtly changes response the faster you strike a pad, rolls and swells with acoustic sounds are pleasingly three-dimensional. And, as always, the selection of electronic tones within the TD-12 is fab - predictable given Roland's long-standing pre-eminence in electronic percussion.

It´s never just a case of deep, subby 808 and 909 kicks; there's a decent array of one-bar dance/ drum'n'bass/techno-ish loops to mess around with, often assigned to one of the cymbal pads. It's fair to say that hardcore dance music fans wouldn't dream of using something as pre-packed as these in a tune, but for solo practice and pure pounding pleasure they're good fun.

Rather more of a mixed bag are the play-along songs offered by the TD-12. Again it's a predictable state of affairs, but a chunk of them are a bit cheesy. Still, it beats playing along with just the clink-clonk of a metronome.