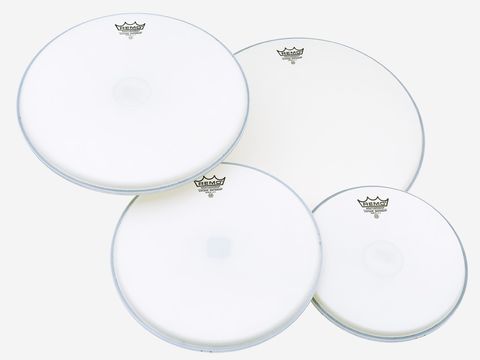 Rather than plunder their historical heritage for instant kudos, Remo has taken what musicians liked about its products from the 1960s and '70s and applied modern manufacturing methods to give a vintage sound that has all the consistency and reliability of today's heads.

Usually when a company brings out a product it's keen to demonstrate its shiny new innovations and developments. Remo, by contrast, has decided to look the other way - to its rich and varied history as one of the driving forces behind modern music, and to relaunch the products that defined how we hear music today.

First introduced in the 1960s, the Emperor drum head added longevity and durability to the consistency that the original, twin-ply Ambassador became known for. While the original Ambassador had 7.5 mil and 3 mil plies, the original Emperor had two plies of 7.5 mil film which dramatically increased durability.

With the advent of drums being miked, the warmer, full Emperor tone quickly became a favourite of burgeoning stars such as John Bonham, well before the hydraulic, overdamped 'studio' sound became popular in the late '70s.

The heads we've been sent for review are 10", 12", 14" and 16". At present the full range of Vintage Emperor heads is available with a coated finish only.

Unlike the Vintage A, there's no change from the standard Remo crown logo, and so the only clue that this is anything other than a standard Emperor is the name printed below. The finish on the review set appears to be more off-white than the standard head, although this could just be a one-off.

The batter surface has the same Remo Weatherking coating as the standard Emperorhead, which has the effect of reducing higher frequencies and providing a fuller sound, and also increasing durability.

The Vintage Emperor is available in the most popular sizes - 8" through to 18" - but at present only as snare/tom batters, with no word on whether bass drum sizes are in the pipeline. We wouldn't be surprised to see them in the future though.

The heads were installed on the toms of our test kit - a thin-shelled undersized birch kit - and after seating and retuning, were taken straight out to a gig. The Vintage Emperors were replacing coated single-ply heads, and the difference was immediately obvious, even to the guitarist!

When soundchecking previously, he'd query the excessive ring of the single-ply heads, but with the Vintage Emperors in place the brighter overtones were muted, and richer, fuller mid-tones were evident, the twin-ply head producing the obvious effect of self-damping. The heads could also be used as a snare batter if you're a heavy hitter.

The Vintage Emperors proved to have a fair tuning range too, tolerating being cranked to near-timbale levels on the 10" tom, and detuned to one-turn above wrinkled on the 16".

Cranked up, the heads sang fairly well but it was obvious that a mid-range tuning suited the heads better. Slackening the heads off let the feel come to the fore, and at a moderate tension the tone was strident and full, decaying fairly quickly with no harsh overtones. That said, the Vintage Emperors didn't struggle to cut through, but the mids and lows were accentuated by the natural twin-ply damping.

The heads proved particularly adept on the two floor toms - 14" and 16" - skillfully controlling that excessive rumble you sometimes get on a 16"x16" with thinner heads.

Compared to standard Emperors, the Vintage was warmer, with a slightly quicker volume drop-off, which is possibly attributable to the thicker film. The Vintage also appeared to offer a marginally brighter fundamental tone.

With some twin-ply heads you get a slightly plastic-y initial attack - a sort of 'thwack!' sound that is subsumed into the main body of the tone, but this isn't evident with the Vintage Emperors. It's one distinct tone, very warm and full, and on our test kit the heads lacked the harsh overtones that lead to an over-abundance of gaffa tape.