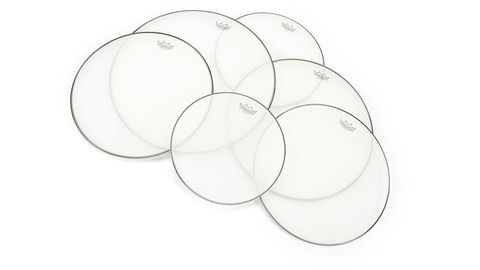 Remo's first open mesh heads give a realistic, if rather pingy feel at wide-ranging tension settings. They should solve any noise issues while enabling longer and less ear-damaging practice sessions.

Practising quietly is always a problem for drummers, and mesh heads which vastly reduce the decibels are a neat solution. Introduced in the summer of 2013, and exclusive to Remo, Silent Stroke heads are the company's first 'open' mesh heads.

So why now? Remo's Director of Product Development, Herbie May, explains,

"The growing popularity of electronic drums for quiet practice is one of many reasons. Drummers can get the same basic drumset sound and feel with only a minimal monetary investment by simply adding Silent Stroke heads to their existing drum kit".

As the world's biggest supplier of drum heads it is perhaps surprising Remo has not marketed such a head previously. Other manufacturers have long offered mesh heads and in fact Remo has previously developed mesh heads for use with Roland's V-Drums. But because these are specifically for V-Drums, they are thicker, acoustically damped twin-ply heads.

Remo also makes woven Kevlar heads, but they are laminated onto a flat Mylar sheet backing.

Silent Stroke heads are made in a similar way to Remo's standard WeatherKing heads. The same Polyester plastic (Mylar) is used, but instead of being formed as a continuous smooth sheet, it is extruded as a fine thread, which is then woven.

The resulting woven fabric is slotted and glued into the identical aluminium collar hoop as with other Remos. You can see the glistening resin in the channel, although it seems to be less thick and you don't get that scary cracking sound you hear when first seating a new conventional Remo.

The quality seems excellent - the fine weave of the mesh is perfectly even, and the heads feel strong, like regular heads. Sizes range from 6" to 18" for toms and snares, and 18" to 24" for bass drums. As with standard heads, the metal hoops on the bass drum heads are a bigger gauge.

Seating and tensioning follows the same procedure as with any other plastic head. Although the material is basically the same Polyester, it is floppier, and when tensioned the feel is relatively soft and springy, particularly at low to mid-tensions. You can though crank them right up and get closer to the firmer, harder feel of a normal head, although it always remains pingy.

This takes a little getting used to, but after a while you realise it is largely the reduction in sound that fools you into thinking they also feel different. In any case, the touch is more realistic than with a hard practice pad set or rubber pads laid on the batters.

When tensioned fairly loosely the sticks/ beater sink in and you might fear breaking through the mesh. Silent Strokes are single-ply, and as there are double and triple-ply mesh heads on the market for really heavy hitters you have to balance the cost and extra sensitivity against durability.

It's natural to tension them quite high in order to get a firmer feel and more bounce, which allows you to play double-stroke rolls and so on with ease, even on your floor tom and bass drum.

There is no need to change the resonant heads, and the mesh heads shift just enough air to engage with the bottom heads so that you retain clear pitch differences between your drums. This means you can practise away in just about any environment without disturbing anyone else - and meanwhile save your ears, reducing fatigue.

There are other suggested uses too, for example, making teaching simpler (you can easily talk over them while playing), or for miming to tracks on TV or on video.

Since they have a finely textured surface we thought they might work nicely for brushes, but actually they don't - the wires snag in the weave if you attempt swishing strokes.

However, with a bit of imagination you might create unusual sound effects, such as those suggested by Herbie May, who says,

"By using different types of sticks and accessories they can be strummed or 'scratched', to create some unusual sound effects and loops."

Remo also assures us that the heads work fine with external electronic triggering. We weren't able to test this aspect out, although with such a firm and clean response they should deliver reliably.