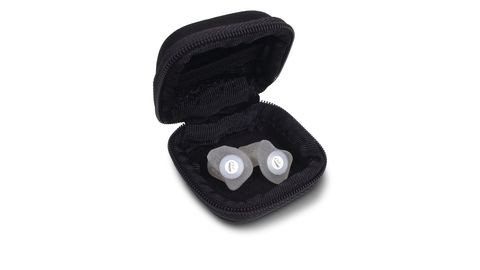 Overall these are pro-level plugs that will protect your ears and cost you less than one decent crash cymbal - and you can replace those!

For instruments that are essentially designed to be attacked, we drummers get quite precious at times about certain parts of our set-up; cymbals, our snare drums and bass drum pedals are usually on the out-of-bounds list at a kit-share gig. And for good reason, they're commonly referred to as 'breakables'.

So why is it, then, that we still put the safety of one of our most fragile, vulnerable, and certainly irreplaceable tools in the hands of those little foam buds that we half-inched from the venue?

That's the question Read Audio is asking, and if you've ever reimagined rehearsal room bog roll as rudimentary hearing protection, so should you.

Read Audio was set up in 2013 to produce custom-made earplugs and in-ear monitors for musicians. If you're unfamiliar with the concept, here's how it works.

Blue silicon is squirted into your ear-canals; after about 10 minutes it sets and creates the perfect impression of your ear, which is then used to create the plug. Inside the plug is a filter which reduces the incoming sound by an average dB-rating.

The difference between this and foam plugs is that the filter reduces the sound at a flatter frequency response, rather than simply blocking out all frequencies.

Granted, custom moulds are no new thing, but there are a few things that Read reckons puts them above the competition. The 'plugs are available in four guises - Acoustic, Orchestral, Amplified and Extreme - and it's the latter two that will be of interest to most kit players, offering 20 or 26dB average attenuation respectively.

Regardless of which filter you choose, the sets cost £135, but Read will supply subsequent spare/ replacement pairs from your original cast at half-price. What's more, it's a fast process. After taking the mould, Read Audio can have your plugs (or replacements) ready to ship in 48 hours.

We opted to try the Amplified set - offering a high level of attenuation, but if you're playing heavy rock or metal, you'll probably want to go for the Extreme model.

The set comes packaged in a protective case, and Read Audio will even include your name/ favourite profanity moulded into the plugs. However, we'd like to have had some indication of which is the left/right earplug (yes, they'll only fit in one, but on a busy stage, it'd be handy).

The material is harder than you might expect or be used to, resembling a pebble, rather than Play-Doh. Despite this, the plugs are still comfortable to wear for an extended time.

Most importantly, the noise attenuation works well too; there's still some of that 'miked-up' sound you get from wearing earplugs (not necessarily a bad thing), and speech between songs can still get lost in the filter.