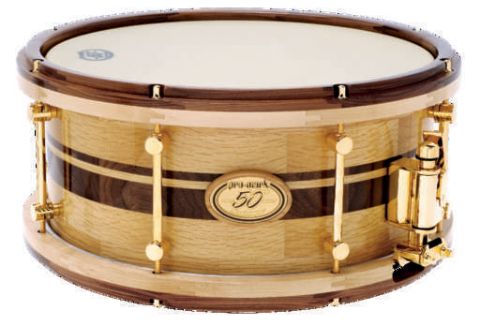 As birthday presents go, this drum is certainly on the generous side. Years of expertise and discernment have gone into the design and it delivers the goods when hit. However, can any drum, no matter how good, be worth this kind of sum? Despite its astronomical price, the limited number of drums available means that they will be snapped up by drummers eager to own a piece of history.

A 50th anniversary of any kind is no small achievement. In Pro-Mark's case, the approach of this landmark date was the cue for the company to commission two commemorative snare drums, one of which is featured here.

Both of the snares are hand built and production of each drum has been limited to just 50, and the UK is allotted just three of each model. It doesn't get any more exclusive than this.

The project was originally conceived at a Frankfurt Music Show dinner. Pro-Mark's director of sales and marketing, Pat Brown, pitched the idea to colleagues Kevin Radomski and Mark Petrocelli, who both jumped at the opportunity. Canadian drumsmith Pete Stanbridge was enlisted to create the drums, after being recommended by a Pro-Mark endorsee.

The end result is one that all four feel justifiably proud of. The two snare drums differ only in size. We have a 14"x6½" example. The other, marginally cheaper, option is a 14"x 5" drum. The shells are formed through a segment shell process. This involves joining 92 blocks of wood by hand and then lathing the result into a shell.

The principal wood used is Japanese white oak, with walnut and oak inlaid in bands. These inlays recreate the stripes found in the Pro-Mark logo. The wooden hoops are similarly hand crafted from a combination of rock maple and pau ferro. The drum's badge is mounted on a block of American hickory. The inclusion of the hickory is significant, as, along with the Japanese oak and maple, it represents the core trio of woods used to make Pro-Mark sticks.

All of the external shell hardware is gold-plated - being a golden anniversary, this is to be expected. You may not be a great fan of such ostentation, but the warm hue of the wood lends itself to the effect.

Eight slender tube lugs encircle the shell discreetly. From a playing position, all that is visible is the tops of tension rods, glinting within the dark hoops. The Dunnett snare release and butt are a little more bulky, but carry just enough elegance to appear sophisticated rather than gaudy.

Pure sound snare wires and custom-printed Remo heads complete the package. Or so you'd expect... Such a highly-specified drum doesn't arrive in a cardboard box - each snare is supplied in its own leather-look, velvet-lined hard case. More goodies await inside - a pair of laser-engraved commemorative Pro-mark sticks, a boxed spares kit, a certificate of authenticity and Pro-Mark and Stanbridge shirts.

Well, like a very expensive snare drum, if that's not too facetious. It's obviously a serious drum and performs exceptionally well - but then so it flipping well should! And there's the nub - few of us have the sort of disposable wealth to afford one of these, even fewer of us will have the opportunity to actually buy one, so this review is about a drum that is, to all intents and purposes, unattainable.