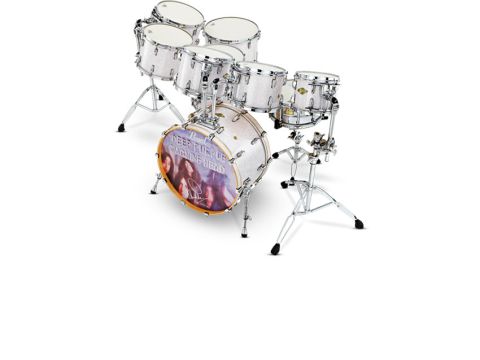 This is one imposing kit (cymbals, drums and hardware et al), with its exemplary build quality and fantastic sound. It is also highly collectable, so I think I would get those skates on and grab one while you can!

As a result of a three-way collaboration between artist, retailer and manufacturer, Pearl has produced this exciting new Ian Paice Signature set derived from Pearl's Masters Premium Legend series.

The kit is strictly 'Limited Edition' with a production run of just 12 kits, available exclusively through Drumwright. It's not the first time this top UK retailer and one of the world's leading drum manufacturers have made an alliance with the legendary drummer - the partnership also produced a specially-badged Ian Paice Signature snare to celebrate the 10th Anniversary of Drumwright six years ago.

This relationship is not purely by coincidence as Ian and Drumwright proprietor, Chris Wright, are great friends and Chris is a big, big fan of Ian's drumming and the music of Deep Purple. Chris asked Ian, "If you were designing your own kit now, what would it be?"

This set up is the result - eloquently marking the 40th anniversary of Machine Head, the album that produced tracks such as Smoke On The Water and (responsible for countless speeding tickets), Highway Star.

This expansive nine-piece set features drum sizes specified by Ian himself, with many available off-the-peg. However, the 22"x14" bass drum is not listed as an option in Pearl's catalogue and the 14"x10" and 15"x10" suspended toms have been specially manufactured by Pearl and are not available as a separate purchase.

The philosophy behind these custom-made toms is that should Ian decide to take a slightly smaller kit out, he can leave the three smaller toms at home in their cases, instead hanging the 14" and 15" toms in their place with a depth that will sit snugly above, and to the side, of the bass drum and without the need to alter the tuning.

The wood shells are constructed using Pearl's SST (Superior Shell Technology), with six 0.9mm layers of maple, giving a uniform thickness of just 5.4mm. Each drum features scarf jointing with the ends precisely tucked and tapered into one another, forming a perfectly round shell.

Each of the silky smooth shells have two labels, one with the familiar Pearl model designation and serial number, the second stating limited edition authenticity and Ian Paice's signature. The final touch comes from the 'Golden Ratio' air vents. This is an over-large breather hole (in gold finish), with one fitted on each of the toms while, due to its size, the bass drum features two.

Many of the drum components are shared with Pearl's Reference series including the floor tom legs, tom leg clamps and the spurs of the retro-styled 24"x14" bass drum, while the bridge-style lugs are the same as those on the Masters series.

Pearl's Opti-Mount tom suspension system (which is isolated from the shells via large grommets), has some ingenious design elements. With little adjustment it allows the unobtrusive brackets to fit virtually any sized tom. Pearl's new super-thin Fat Tone Hoop is a cross between a die-cast and triple-flanged hoop, featuring a tight-welded top roll flange. Unlike die-cast hoops they don't naturally 'gate' the drum sound, instead leaving it as open as possible.

We first reviewed the original retro-styled Ian Paice Signature steel snare 12 years ago. This proved to be an impressive drum with some striking and unique features, including the built-in adjustable dampener and 10 standard tube-style lugs, with each tension rod having its own locking nut - once tuned, the drum will stay that way.

While all of the IP Signature kits come pre-tuned to Ian's preferred settings from Drumwright, the review set was hurriedly sent out to make it in time for this review. However, only the slightest alteration is necessary to achieve the perfect pitch intervals, with adjustment of the batter heads only.

The whole tuning process is rapid due to the un-wielding Fat Tone hoops, silky smooth stainless tuning bolts and the superb machining of each bearing edge which provides an accurate and stable tuning platform.

Playing around the entire kit is amazing fun - attempting a fast 'Ian Paice' style single- stroke roll around the whole kit unfortunately (for everyone else) appears to spill over too many bars where the 'event' is finally terminated by the excellent Paiste crashes (an optional extra). The excitement extends around the complete set from the high pitched 10" tom down to the low-end grunt of the 18" floor tom and almost sub-sonic kick.

Overall the drum sound is incredibly impressive. With the perfect balance of the rich maple warmth coupled with the fresh openness of the un-dampened Ambassador heads and Fat Tone hoops the kit also offers plenty of volume and projection.