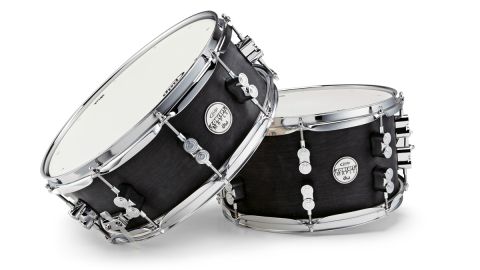 PDP is constantly impressing us by drawing upon quality DW craftsmanship to create its much more affordable ranges. These snares certainly are a bargain for the asking price.

Pacific Drums and Percussion, the offspring of parent company DW, has made a strong reputation of its own since being launched 15 years ago.

Having greatly impressed us in the past with quality, affordable drums such as the Mainstage Series and Blackout snare range, the company has since gone on to intrigue drummers worldwide with the Concept Series.

This month, we get our hands on a couple of the latest additions to the Concept Series, in the form of the newly released Black Wax snare drums.

The two latter options are particularly noteworthy as they are also used on DW's custom snare lines such as the Collector's Series; bringing a touch of high-end class to the proceedings. The outer shell is also treated with a "hand-applied wax sealer that protects its maple exterior and provides an earthy matte finish".

The innovation behind the True-Pitch tension rods is a much smaller thread, which is designed to allow a finer degree of accuracy whilst tuning and therefore achieving a more even pitch across the drum.

The batter heads come with numbered lugs to aid with the recommended opposite tuning style. Again, this is also something that DW does for its high-end snares, only more subtly. This may come in handy for some newer drummers, but isn't necessary for the majority of seasoned players.

When the magic words 'matte black' and 'chrome' were mentioned, we must admit we did get a little excited as we suspect most blokes would.

Much to our disappointment though, the 'black' in Black Wax is probably best described as a dull grey.
A rather uninspiring finish that could scarcely be described as eye-catching.

On the plus side though, the (let's call it 'dark grey' for argument's sake) satin finish does work well to offset the bounty of gleaming chrome hardware. As an added bonus too, closer inspection reveals the wood grain of the maple shell through the wax coating.

The first on the stand is the 13"x7", which is greeted by a strong 'thwack' directly to its centre. The drum produces a very sharp attack and has an incredibly sensitive snare response. After fiddling with the tuning somewhat, it seems to be most content in a mid to high tuning range.

Strangely, considering the depth of the drum, it does not offer a great deal of low-end frequencies. Despite the all-maple shell, one might expect a bit more beef in a lower tuning. That said, there is still some depth of tonality to the sound, especially when the snare strainer has been loosened off to allow the resonant head to breathe a little more.

The 14"x51⁄2" functions rather as you might expect it to. With a shorter depth (in comparison to the 13"x7"), there is even more of a discernible crack from the rim-shot and the snare wires are minutely quicker to react to the more sensitive strokes.

The kind of short snap that both of these snare drums produce would likely work wonders with our missing counterpart: the 10"x6". We would wager that it sounds absolutely fantastic as a side snare, cranked up nice and tight.

The look and feel of the Mag Throw-off is most agreeable. The way that the strainer sticks out horizontally at a 90° angle to the shell is particularly convenient. It does however suffer slightly without its usual pairing with the 3P butt-plate (again found on DW's high-end snares).

The Black Wax Concept Series snares come with a no-frills, plain butt-plate to hold the nylon snare strap in place. After a bit of practice though, quick adjustability is achievable without even having to throw off the snare, which is a useful touch for quick tonal changes.

In essence, these are perhaps not the most exciting looking or sounding snare drums we've come across, but once you remember that both of them come with a price tag of less than £200, it's difficult to be too critical of them. For the money they are very well built and undoubtedly punch above their weight sonically.