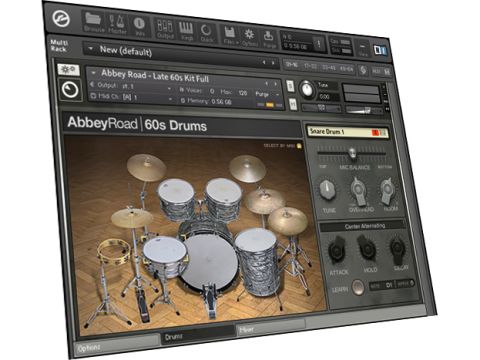 Excellent clarity and depth coupled with a nice interface make for results that go far beyond the '60s.

The drum kits have been selected as representative of their eras with the Early 60s model being a four-piece Jasper shell Gretsch with two Ludwig snares and the Late 60s kit an original five-piece 1967 Ludwig Hollywood with Ludwig and Slingerland snares. These kits are completed with a set of '60s Zildjian cymbals.

The GUI design uses the distinctive knob and fader designs from the REDD and TG series consoles and the mixer page features a set of individual drum mic channels and three kit channels: mono overhead, stereo overhead and stereo room.

Both drum kits come in three instrument flavours: Full, Lite and Vintage. The Vintage version of each kit only loads the channels that were standard to the Abbey Road mic setup of the day: mono overhead and kick drum for the Early 60s and mono overhead, kick, bottom snare and tom mics for Late 60s. The snare and kick channels are a mixture of top/bottom and inside/outside mic positions respectively, with sliders on the main GUI page adjusting their balance.

The Options page features basic response controls (velocity, key range, randomisation, etc) as well as a Snare Mic Bleed slider to set the level of the other drums picked up by the bottom snare mic, helping enhance realism when only a few channels are used.

This package focuses on excellent sound quality and realism and is uncluttered by the usual plethora of secondary controls. It doesn't try to slavishly recreate The Beatles' drum sound and instead makes full use of the unchanged acoustics of Studio Two.

Both kits sound superb straight off the bat with a great balance of clarity, depth, transient precision and old school 'body' (especially the Early 60s kit). Though the direct mic channels sound great and allow for a pleasing dry sound on their own, it is with the overheads and room mics that the sound really sings.

Studio Two is a large room (200m/2 floor with an 8.5m ceiling) and makes for a powerful sound, but the depth quality of the velocity layering enables you to get excellent results in subtler Jazz styles. The quality of the ambience is such that we kept tending to use only the room mics, the mono overhead and the kick drum channel, which, when combined, create a beautifully open and natural tone.

At the other end of the scale, the Late 60s kit also features a selection of Ringo-esque teatowel covered sounds for the snare and toms which, when biased towards the direct mics, creates a lovely dry, tubby, funky tonality.

Abbey Road 60s Drums' historic element does not limit its applications, though it can't do tight, dead, highly processed drums of the sort that you'd use in jazz funk and metal, for example. However, the trend for old school, big studio drum sounds makes this collection as 'now' as it is 'then'. Yes you can sound a bit Beatles, or even like the Shadows, but it allows so much more as it is a well-crafted slice of the tonal character that Abbey Road is famous for.

As for value, this may seem expensive for just two drum kits, but it is a classic and distinctive sound set could see a lot of action in many setups. If classy real drums are your bag then this is definitely a good investment.

Early 60s close
The Early 60s kit utilising the kick drum mic channel ('out' position) and mono overhead, which was the standard setup at Abbey Road during the early '60s.