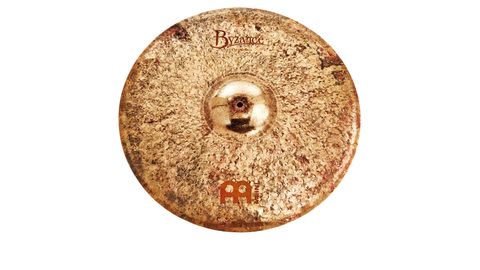 It would be difficult to pigeonhole this cymbal into a particular genre. It is a cymbal with a split personality, easily transitioning from ride to crash and back again, making it highly versatile.

The additional input from the various members of Mike's large on-line drumming community make this collaboration unique. Together they've created a cymbal which Meinl describes as possessing "articulate sticking to wide open crashing".

Mike says he wanted a ride that "would have amazing tone, stick definition and would swell into a beautiful crash".

First unveiled at the 2014 NAMM show, the Transition Ride hails from Meinl's pro Byzance Extra Dry Series. This Turkish-made Signature Ride is cast from a B20 alloy - a blend used in Byzance cymbals and many of the world's top pro cymbals.

Around the entire surface there are distinct areas boasting a variety of textures and finishes - each contributing to the visual appeal and sonic character. The upper surface appears 'pre-aged' or stressed by some intensive hammering and flame grilling, while other sections are simply left to oxidise naturally.

This graceful ageing process is helped by the mottled patches of green and brown interwoven in between the firm hand-hammered indentations eventually encompassing the raised bell. The underside of this bell is left entirely in its raw state with a gloriously deep red oxide hue.

In contrast, the rest of the underside is highly polished and the fine lathed grooves have been all but smoothed-out due to this intense shining - the lathe scribes abruptly halting as they make contact with the well-rounded, robustly red bell.

At a quick glance its hard to spot the numerous logos dotted around - each one understated - and, if you didn't realise this was a signature model, it would be easy to glance over Mike Johnston's laser-etched signature under the bell. Mike believes the cymbal is suitable for all players of any genre and didn't want to put anyone off!

It quickly becomes evident this cymbal is going to be lively - you can detect it flex under each stick strike, giving it a slightly organic feel. A well-placed tip-strike produces a delicate dry ping followed by a wash with an underlying dark and mysterious Turkish tone. By slightly changing the angle of the stick and awarding the edge of the cymbal with a shoulder wallop, it instantly morphs into a very large crash.

It's easy to control, both to crash, ride or both. This can prove useful for filling those gaps, underpinning a nippy middle eight, raising a chorus, pounding into a punky verse or simply to define the end of an eight-bar phrase.

Striking at the edge with a medium blow produces a gong-like bloom and increasing it causes it to burst into a huge crash.

While the overall sound is thick and full of substance, it never loses control, allowing each strike to be heard with clarity. Even at a peak, the bell is highly capable of penetrating the ensuing sound waves, though always complementing.