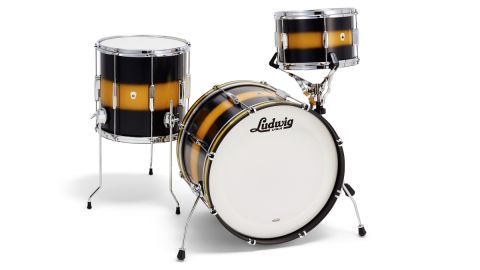 Ludwig raids its rich history to revitalise a classic line, revamping it for today's busy drummer.

Speaking as a vintage drum enthusiasts, we had a big smile on our face when we took this lot out of their boxes.

It was like being transported back to 1949 and taking delivery of a brand new Ludwig lightweight gigging kit. Duco (dual colour) finishes and double-ended centre lugs characterised the cheaper lines by Ludwig, Slingerland and Rogers.

Unlike today, big companies back then tended to make an all-bells-and-whistles professional set and a slightly less hardware-burdened gigging set. The latter was aimed at local drummers (this being in the USA which is after all pretty massive) and weekend warriors with regular dance and bar gigs. A lightweight kit for easy transport, and hence the 'club' rather than 'student' moniker.

Since the shells were essentially the same as on the top-range kits, the drums often sounded just as good - if not better because of the decreased hardware. The centre-mounted double-ended lugs required less metalwork and less factory time, so allowing the drums to be built more quickly and cheaply.

Now today's players, who are more hip to shell configurations, are developing a taste for these slimmed-down kits, and there is a move back to reclaiming and reassessing them.

Ludwig actually reissued the Club Date SE (Special Edition) a few years ago. That was a Taiwan-built version with 6-ply shells of cherry and gumwood with rounded bearing edges. Now today's new offering is made in the USA, in Ludwig's Monroe, North Carolina factory and has maple shells.

The original Club Date shells from 1949 through to the 1970s were typical of Ludwig at the time. They started with quarter-inch, 3-ply mahogany with reinforcing rings of 1" solid maple and white painted ResaCote interiors. Later, Ludwig changed to maple with a poplar core, eventually settling on straight-sided 6-ply shells by the 1970s.

For this new incarnation Ludwig has used a broadly similar shell, but this time it is 7-ply, made up of twin 0.9mm maple plies, inner and outer, with a core of three 1mm plies of poplar. That adds up to 6.6mm un-sanded. There are no re-rings and bearing edges are vintage style with a 1/8" round-over playing edge.

We have a Vintage kit here and the defining feature is the dual colour 'Duco' finish. This is a paint spray job in Gold to Black Fade. There is one alternative, which is Blue to Silver Fade. These Duco finishes were common in the 1940s and 1950s, but resurrecting them today is presumably labour-intensive and the two Vintage sets are considerably dearer than the standard wrapped kits.

Ironically, Duco finishes were actually seen more on cheaper drum lines in the past, so the situation is reversed. But we have to say, a pristine, shiny satin Duco finish is certainly a novel look today and the review kit is rather splendid. The bass drum has bright gold glitter hoop inserts that rather stick out, but are also an authentic carry-over from the originals.

Aside from the shells, the other big change from the previous SE reissue are the lugs. Replacing the Classic lugs (which were also deployed on the earliest Club Dates), are newly cast Imperial lugs - small ones (21⁄4" long) on the rack tom and extended (4", 10cm) versions on the floor tom and bass drum. The lugs are dazzling, but you have to be careful with the long, exposed lug bolts as it's possible for them to get stuck and even cross-threaded. Take your time, keep them loose and it shouldn't be a problem.

Concessions to the modern era are seen in the bass drum tension claws which are a contemporary design, practical, sturdy and handsome. And a Ludwig Vibra-Hoop steel isolation bracket is provided for the small tom.

The floor tom legs and brackets are classic Ludwig designs, but are still functional. The brackets have thick black rubber gaskets to ensure the legs clear the bottom hoop. There are no memory locks, the hardware looks basically as it did 40 years ago. Threading the legs through the eye hole is a bit tight, but fine once inserted and the legs are solid enough, despite their tiny rubber feet.

Similarly with the fold-out gull-wing bass drum spurs. There are no memory locks to ensure stability, but they hold well enough for medium-heavy use.

The upside of all this minimal hardware is that the drums are noticeably lighter than most present day designs.

Here's the crowning glory. The drums sound great. Really great. The 12"x8" is full bodied with a punch that is something else. It has so much tone, warmth and sustain.

The 14"x14" felt slightly less impressively full to start with, even though unencumbered by its minimal six lugs. It benefits from being tuned down a little which gives it more welly. This size of floor tom is always versatile in being able to offer gravity with bite, minus the flab of a 16".

Then there's the kick, which by modern standards is small at 20"x14", but boy does it punch above its weight. It comes with an intact front head so you get the full rich tone of the drum.

A bass drum should slam - our favourite word for the impact of beater against head. It should have an initial blow that is hard and curt and this must be followed by an opening up of the tone to a sonorous and rounded 'woomph'. That's exactly what you get here.

For us it works best when the wrinkles are taken out and then a half-turn added to both sides so that there is proper tension with a clear tone, a note, but still deep with some slappy play left in the batter head.

As with the two toms, the lightweight fittings, classic thin-ish maple shells and rounded bearing edges allow the drum to speak without any feeling of being cramped, squashed or limited. The timbre of maple is favoured by many and if you want a more traditional full-toned bass drum, one that recalls the Bernard Purdie soul/r'n'b of the '60s/'70s before the one-dimensional single-headed cardboard box 'blatt' kicked in, it is here right in front of you.

Yet again we find that we repeat the old mantra regarding Ludwig: the company may regularly return to earlier glories, but, like Gretsch, if it ain't broke why fix it? We really do find time and again with Ludwig reviews that, whereas some of the hardware looks unchanged for 50 years, the sound always perks you up.

And even though that hardware was initially lightweight for economic reasons, it will do fine for the sort of drummer who is attracted to this sort of kit. And the fortuitous offshoot result is a wide-open and effortlessly fresh sound.