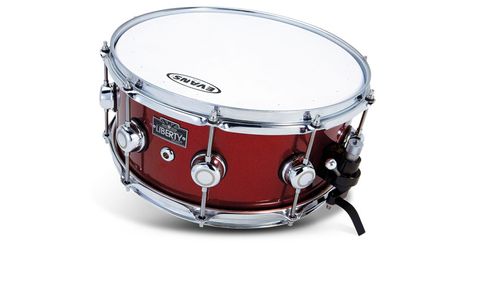 A versatile drum made by a fast-growing UK builder, yet more proof of the drum building talent on these shores.

With more than a decade's experience in building drums, Liberty is one of the UK's most respected custom builders. The brainchild of Andrew Street, this County Durham-based company has received several enthusiastic reviews in recent years for its full kits, today we get to grips with one of its standalone snares.

The first thing we notice on unpacking the snare is its gorgeous metallic red finish and smart round lugs. Andrew tells us that this particular finish eats up the hours during production, but it really is worth the effort.

Popping the batter head off for a peak inside, we're met with a flawless birch shell with delicately cut 45° bearing edge. There is also, of course, the reinforcement ring which has also been cut to 45°. In theory the ring should add a more focused tone to the snare, taming birch's natural high-end and giving it some extra mid weight.

While in our rehearsal room the snare's tonal capabilities are apparent, it is when we take it to the stage that things really get interesting. Un-miked and playing a set of wedding tunes, the Liberty drum is able to take everything in its stride, the birch shell perfectly projecting the ping needed for the pop staples, with a few quick tuning changes ensuring that it was also spot on for the rockier numbers.

There's also articulation to burn, with even the most delicate of rolls peppered with easily-definable notes and no sign of our stick-work being lost in a wave of unwanted snare hiss.

Of course, for many the tonal differences between birch, maple and even bubinga are minimal and just about non-existent for your average gig-goer. Back to the rehearsal room and we put this to the test by putting the snare up against one of our old, tried and trusted maple drums, and yes, when cranked to the top end of its pitch the birch does carry a frightening amount of top-end attack, by slackening off the tuning ever so slightly we are quickly at a tone not a million miles away from the maple.