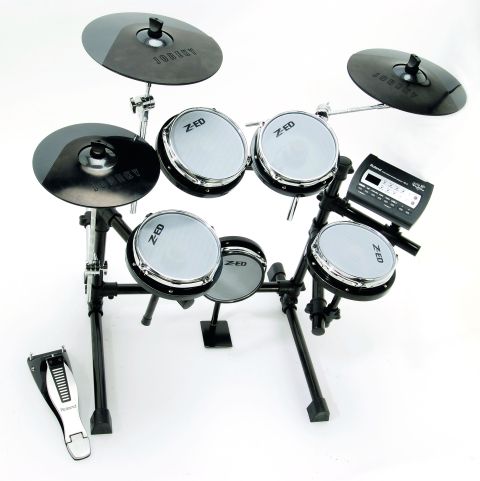 You may raise your eyebrows at the name, but the Jobeky Classic does enough to quiet any concerns about its place in the current electronic drum market. It's a fine-looking kit that feels good and is a welcome addition to the lower end of e-kits. It's not perfect, but corner cutting is neither too severe nor too obvious here and - used for applications that play to its strengths - it'll do you proud.

The Jobeky Classic was released around the same time as the Alesis DM5 and Traps E400 electronic drum sets. The unfamiliar brand name is an interesting reflection of the fact that all three of these entry-level(ish) sets come not from one of the big boys of electronic percussion, but from either smaller - or at least leftfield - outfits.

While Yamaha and Roland continue to dominate the mid and higher rungs of the ladder, smaller brands have managed to produce their own kits to a budget. It may not revolutionise the electronic drum market, but it's certainly providing a point of entry for younger or less well-heeled drummers. Which can only be a good thing.

And although the Jobeky differs significantly from the Traps and Alesis offerings by virtue of its higher price and more serious stance, it still represents good value on paper at least.

Origin of the species

The man behind Jobeky is Colin Ackroyd, whose background is in acoustic drum production. But with the Jobeky line of e-kits, he's looking to translate his knowledge of drummers' ergonomic needs from traditional to more modern drum gear. The company's portfolio currently comprises the mid-range Classic set here, the real entry-level DD-502 and the custom-colour Legend Series (essentially a glammed-up Classic).

Not a massively extensive line-up, but a solid start nevertheless.

So, let's kick off with the best bits of the Classic - namely the five mesh head playing surfaces. The pads are all 8" in diameter, which strikes a fair compromise between adequate target area, cost and compactness.

Of the set, four are simple single-zone types, with a dual-zoner cropping up to do snare drum duties. This is, of course, a welcome feature, meaning that when the Classic is hooked up to a suitable module (like the Roland TD-3 that was bundled with the kit for the purposes of this review) it allows for both snare head and rim shot sounds.

Don't expect completely realistic acoustic emulations here - that's outside of the Classic/TD-3 combination's abilities and remit, but the option to trigger two different sounds is useful and adds an extra dimension to backbeats. There's also a very decent level of sensitivity afforded by the mesh pads, so it's not too difficult to play ghost notes that are significantly less intrusive than your main strikes.

In short, they feel very pleasant under the stick and work at least as well as you could expect them to.

The pads are reassuringly weighty. They stick to a tried and tested cast chassis/standard drum head assembly blueprint and certainly appear robust enough to survive ongoing assault from 5Bs - or whatever your chosen weapon. There are compromises to be found on the Classic though, and perhaps the most obvious are in the pad mounts, which involve simply screwing a thread into the base on the pad - adjustment is done via wingnut-secured tilters and although they stay firm, this kind of arrangement does not strike us as particularly roadworthy.

We think the constant set-up and tear-down would take its toll on these aspects of the kit, so it's best suited to occasional trips out of the rehearsal studio or bedroom where it's more or less permanently set.

The cymbal arms that support the (half) rubber-faced pads are standard hardware fare and are no cause for concern. The cymbal pads themselves respond in suitable fashion under the stick. The rubber areas mark easily, but there's no reason to believe that they will wear out particularly quickly.

Although there's nothing quite like whacking a big old sheet of bronze, these work just fine. There's no cool, pseudo hi-hat thing going on here, the Classic has a simple single pad for hi-hat duties; but then let's not expect more than is fair for the price, shall we?

The rack is a 'square-on' design made up of acceptably chunky but lightweight tubing with just a couple of branches for snare and floor tom/module-holding duties. It's not a fussy, over-designed piece of radical engineering but works as well as it should once everything's secure. The length of the legs makes for a solid platform to build on and the clamps are sufficiently manly to grasp pipes in arresting fashion.

The only aspect of the rack that we really had a beef with is the fact that the clamps employ hex bolts, which means a) you have to use an Allen key rather than a standard drum key for adjustment and b) there's no quick way of tweaking the set-up. Instead of being able to grab a decently proportioned paddle-type wingnut to slacken or increase tension, it's a case of having to reach for the Allen key (which Jobeky are good enough to supply), aiming carefully to get it in the bolt and fiddling accordingly.

It's really not a big deal as long as you are not mid-performance, but it is another indicator that the Classic will be more at home in domestic practice or permanently-rigged rehearsal situations than for in-and-out-of-the-van live gigs.