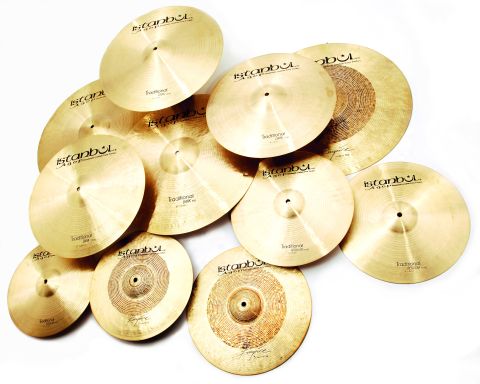 These cymbals are fabulous instruments that are exceptionally well priced. Where handmade has sometimes meant homemade, Istanbul Agop's quality control is second to none. Among the dominating big brands of cymbal makers are independents like Istanbul Agop turning out small numbers of interesting and unique cymbals. Any discerning drummer ought to lend their ears to its cymbals.

Istanbul Agop is a small, family-owned company that has been making cymbals for over a quarter of a century. Its reputation for producing high-quality, handmade instruments is no secret among drummers.

Istanbul Agop (pronounced ‘ar-gop´) was founded by master cymbal-smith Agop Tomurcuk and his partner Mehmet Tamdeger in 1980. Agop spent his life making cymbals starting at the age of nine in Zildjian´s original K factory in Istanbul. By the time the factory closed in 1978, he had risen to the position of foreman.

After the demise of the Zildjian factory, he set about creating the Istanbul Agop range. The company has since been particularly successful in America. It has a healthy roster of endorsees there which range from Blue Note stalwarts such as Idris Muhammad through to mainstream freelancers such as Matt Chamberlain and Joey Waronker.

Agop´s death in 1996 led to his two sons, Arman and Sarkis Tomurcuk, stepping in to run the company. In time, original partner Mehmet Tamdeger decided to split from Arman and Sarkis and he now runs his own cymbal company, Istanbul Mehmet.

The cymbals that we have for review are a selection of Traditionals (Istanbul Agop´s flagship range) and Empires - one of the company´s six custom lines. Regardless of their eventual tunings and voicings, all Istanbul Agop cymbals are cast individually from the company´s own B20 bronze alloy. Considered by many to be the premium alloy for cymbal making, the high tin content (20 percent) of B20 makes it soft and malleable, infusing it with richness and warmth.

After initial machine rolling and pressing the cymbals are hammered and lathed by hand. The finished cymbals are rigorously inspected before being sent out. Any that fail to meet the standard go straight back to the casting room to be melted down.

The Traditional range is Istanbul Agop´s and features many models over various weights. Of these we have two pairs of hi-hats, three crashes and two rides to test. These numbers barely scratch the surface in terms of the models available (there are five varieties of Traditional hi-hat alone), but give a good idea of the flavour of the series.

The Traditional cymbals are lathed conventionally on both sides and plenty of hammer marks are visible beneath the grooves.

Kicking things off is a pair of 13" Regular hi-hats, which partner a Medium top cymbal with a Medium-Heavy bottom. They are bright, crisp and pleasingly rounded, especially for a smaller diameter pair of hats. Their response is understandably quick and they give a very positive ‘chick´ when stepped. They are also capable of a good level of volume. This, combined with their tonal qualities, makes them an impressive pair of cymbals.

Moving up to a pair of 14" Regular hi-hats, things get a little deeper. Though they possess an opening toppy edge, the core of the hats´ sound is much lower and meatier. As a result, loosening the pedal a fraction gives a fat, chunky quality to eighth notes, while washing them half-open makes them fizz with abandon.

The three crashes are all Traditional Dark models in 16", 17" and 18" diameters. All three performed well with the 17" and 18" models really excelling. They open rapidly and the warm note that wells up is as sweet as it is punchy. The decay on all of them is incredibly harmonious, with all of the reverberations merging in agreement.

Both of the rides supplied were Traditional Dark. As with all of the Traditionals they are ‘open´ cymbals and, as such, are pretty versatile. The 21" model is warm and gives a clean stick response. Beneath the stick sound lies plenty of silvery and, at times, fairly complex wash - but not enough to swamp patterns. A very responsive and musical cymbal.

The 22" Dark ride is similarly-voiced to the 21" though its bigger diameter makes it a louder proposition especially on the bell.

Empire of the sons

The Empire cymbals are strikingly different to the Traditionals. Underneath, they are completely unlathed and covered instead in countless hammer marks. On top they are conventionally lathed from the edges to roughly half way into the centre at which point the lathing takes on much wider, open bands that continue all the way to the centre hole. The methods employed in making the cymbals, along with their extra weight, make them sound tighter and a good deal more aggressive than the Traditional models.

The two pairs of Empire hi-hats (13" and 14") provided are focused with a good level of attack that cuts through. Beneath all that brightness is a warmth that keeps the hats firmly on the refined side of raucous.

The two Empire rides (20" and 21") both give a strong stick sound over a wash that is faintly trashy. Their toppiness extends to the bells, which are penetrating when given the shoulder of the stick. The hi-hats and the rides are the only models in the Empire range. This is a real shame as a matching set of crashes, chinas and so on could only improve what is a truly intriguing range of cymbals.