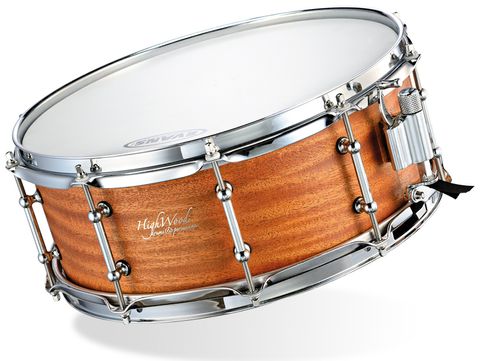 Once again the UK's HighWood has produced two super snare drums which stand comparison with anything on the market.

On The Beatles' Revolver classic 'Tomorrow Never Knows', Ringo's beloved Ludwig Jazz Festival snare clonks out with a sound at once warm and woody, yet sharp and snappy.

That special sound results in part from the thin three-ply shells with reinforcing hoops. This is the inspiration for HighWood's Heritage line.

Other hardwoods may be introduced in the future. Drums are 14" in diameter and from 4" to 8" in depth. Finishes include satin oils, pearl or glitter wraps.

Ludwig's '60s drums were made from 3-ply mahogany or maple with a poplar core and solid maple reinforcing rings. HighWood experimented with recreating this, but learned that "poplar is not consistent in how it behaves" so focused instead on making shells as thin as possible while keeping to three plies.

"We also used butt joints instead of the rolled and lapped techniques of old drums as they create more tension and rigidity in the shell."

HighWood sent two drums for review - a 14"x5" and 14"x6". The shallower drum is actually the prototype, and is 100 percent mahogany.

The deeper drum is a recent production model with mahogany-maple-mahogany mix shell and maple-mahogany-maple re-rings. Both drums are finished in a natural reddish-brown mahogany satin oil and have lovingly cut and finished, slightly rounded-over 45° bearing edges.

In keeping with the vintage style, both drums also have twin-point mounted tube lugs, although you can specify beavertail lugs. The deeper drum also has vintage-style flat steel hoops and clips in black chrome.

The prototype has a side-lever generic throw-off, which is strong if rather stiff. The deeper drum has an upgrade to a silky-smooth Trick GS007. HighWood will fit whatever you like with price adjustment. Both drums have HighWood 48-strand snare wires.

A thin shell resonates more than a thick shell - which is relatively more stable - so more of that woody tone is imparted to the sound. And when that wood is African mahogany you are treated to a lovely, warm and dark timbre. This is the vintage tone that HighWood refers to.

I took the 14"x5 " out on a gig and played the first set with it. It was great - fat and full of tone, responsive and clear. That fatness did start to feel thick after a while, so I changed to a more aggressive metal snare.

By thick, what I'm trying to describe is the almost treacly sweet, fat snarey tone, partly due to the 48-strand snare wires, which can feel like it's weighing you down on faster tunes.

For this reason, the drums respond well to higher tuning - giving you that piercing clonk Ringo used (with rim shots) on Beatles albums pre-Sergeant Pepper's and heavy damping.

The bigger, 14"x6" drum is surprisingly different. It feels rather deeper than its extra inch would suggest. It has the extra maple component and eight lugs instead of 10, which both add to the resonant brightness.

And there's a real old-school hollow chime to it, like a steel drum or the snare on a massive '70s rock ballad, a Russ Kunkel-type stadium-filling tear-jerker.

Tuned too low, it can become sluggish, but from medium tension up it has immense presence. Going back to the shallower drum after this, it feels compact and tight until your ears have got used to it again.

As for the flat steel hoops, these are vintage-looking but brought up to date with enclosed drum key clips. The hoops are heavyweight 2.3mm gauge with a flattened, smoothed-over top so that they should do no more harm to your sticks than normal triple-flanged. You do have to aim carefully on rim shots, though, to avoid the clips.

Ludwig and DW have both successfully added this retro type of shell to their lines, but HighWood will make them for you cheaper. And make no mistake, these are superb drums with a beautiful tone.

The ultra-thin shells of mahogany and maple combine to give a classic warm and resonant tone, inspiring your most musical touch. These are drums anyone would be proud to own.