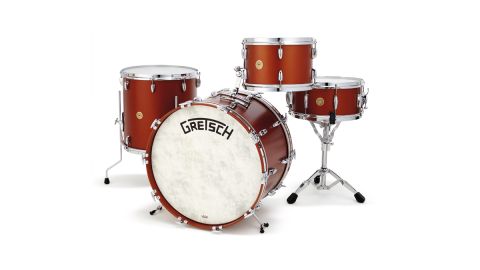 Gretsch has finally gone and done it. Built a lovingly faithful reproduction of its most sought-after three-ply round-badge era Broadkasters, with wise option of period or modern hardware.

Gretsch edges it in the legendary stakes with its 'round badge' Broadkaster drums from the '50s and '60s - favourites of studio drummers and producers.

Gretsch first developed its three-ply, straight-sided shell in the 1920s. Up till then drums were made from steam-bent solid planks stiffened by reinforcing rings. By cross-laminating the three plies Gretsch defined the ply shell with no need for re-rings. From around 1958 Gretsch went from three to six-ply shells of roughly the same quarter-inch thickness.

This type of shell has remained ever since. Gretsch released the Brooklyn series in 2012, calling on classic designs, but incorporating the six-ply shell. Now this new Broadkaster resurrects the legendary three-ply shell with the choice of 1950s-spec 'Vintage' hardware or updated 'Standard' modern hardware.

First, those shells. They follow the original lay-up of maple-poplar-maple (six-ply shells are maple and gumwood). The shells are 0.265" (6.7mm) thick and scarf-jointed for extra stability.

Bass drums and toms also have the anachronistic reverse round-over bearing edges from the 1950s. So the inside edge of the shell sits higher and rounds off towards the outside. Thus the head wraps over the edge and has more contact with the shell.

There are four finishes - two Nitron wraps in Antique Pearl and Anniversary Sparkle, and two Nitrocellulose lacquers in Satin Classic Maple and Satin Copper Mist. The review set is smoothly finished in the latter, a colour last seen in 1978 on a Ford Granada, so probably overdue a comeback. Internally the drums have Gretsch's famous silver sealer paint, and a new/old orange paper label with serial number, while outside there's that all- important brass round badge.

Like the Brooklyn, the snare and toms have Gretsch's 3mm double-flanged chrome-plated steel hoops, while the bass drum hoops are standard six-ply maple, finished in Satin Copper with mirror chrome inlays.

You can play safe by coupling your vintage shells with modern 'Standard' hardware - ie: heavy spurs, tom legs, isolation mount. These are as featured on the Brooklyn and USA series. But (as with our review kit) it's more authentic to go for the Vintage package.

This means 1950s-era drum mufflers, floor tom legs, rail consolette, spurs, and bass drum T-rods. Of course, the problem with playing vintage drums has always been the outdated hardware. So there's a delicious cussedness in resurrecting this puny tackle.

The kookiest item of hardware is the scrawny bass drum spurs which are secured by small wing screws tucked behind the lugs where it's tricky to insert your fingers. They hold the drum upright, but not much more. The Standard pack has stout 12.7mm legs, while the Vintage has the old 9.5mm legs.

I have identical slim legs on my own 1981 USA Gretsch and they're fine. The problems start with the diamond bracket which is tightened by a small finger-biting wing screw. Then the knurling on the legs only goes halfway up, so if you set the tom low or sloping towards you the wing screw ends up tightening onto the smooth lower part of the leg, which doesn't hold.

Over the years I've tried gaffer tape and small memory locks to stop the floor tom from sinking. After that I wasn't holding out much hope for the consolette mount, but I loved it. Setting up is a pain, Gretsch provides a hexagonal box tool where a spanner might be better. But once tightened it works rather well. It has a short reach, but that's fine - you can slide the drum along the rail and also angle it laterally.

The way the tom simply slips onto the spade-clip bracket is almost as resonance-enhancing as a RIMS-style mount. Toms have the original big screw-up double dampers top and bottom, with the exterior chromed circular knobs which are rather handsome.

The dampers can completely stifle your toms - cool for practising. I long ago took them off my Gretsch. As with all screw-up dampers (and the reason they've been superseded), they choke the downward movement of the batter head when you strike it. However, this is not so with the bottom head. And if you need to tame a humming floor tom, you can adjust the damper to just kiss the bottom head from inside and above.

Accompanying this kit should be the Vintage hardware snare (Micro-Sensitive throw-off and snap-in tuning key holder), but we have a 'Standard' 14"x61⁄2" with Lightning pull-away throw-off and butt strainer. The Lightning is a lovely looker, but you sense it could drop down if you play too hard (DW has a preventing magnet on their newbie version).

The snare has the three-ply shell, round badge and double-flanged hoops, although all Broadkaster snares have standard 30° bearing edges. Some snares suffer from a centre dead spot, but not this one. Finding a sweet spot at medium-low batter tension plus tight bottom head and just-gripping snare wires produces the fattest sound.

A satisfyingly meaty, full and warm backbeat. The hoops are a little thicker than the old stick choppers with a smoothed top edge to save your sticks. Catch those rims and you get a dazzling big band ping.

What of those toms and bass drum with the three-ply shells, rounded edges and flanged hoops? The small tom at medium batter tension has a special warmth, the round-over edges giving it a heightened woody but bright maple tone, almost soft and calfy.

Tuned up you quickly get a bebop-py Gretsch tone, but a little more open because of the flat hoops. The 16" floor tom has more of the same but with an almost timpani-like grandeur, slightly harder, zingier.

The bass drum has an intact front Fibreskyn head with period Gretsch logo and internal damper. This consists of a felt strip stapled to the bottom of the drum at the front edge and stretched up to the top where it's controlled by a damper screw knob. This enables you to tension the strip against the resonant head. With the drum otherwise open, the sound is awesome. A powerful, full, tough and fat blast.