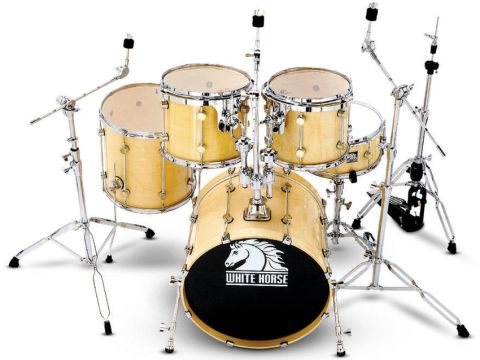 For sheer value for money, this is a ﬁve-star kit, sadly held back by three-star looks and the occasional odd, inelegant design feature such as the awkward tilter on the snare stand. For us, that equates to an overall four-star recommendation. If Gear4 took some fashion tips from the hipper budget companies, it could very easily have an absolutely killer kit on its hands.

We've already encountered Gear4Music's entry-level kit and, at a whopping £145, it had us gasping. Now we have G4M's 'professional' kit at the mountainous price of £430! Yes, the world's gone mad.

How come it's so cheap? Well, it's made in China, there's just the one conﬁguration and it's flogged online, cutting out the middle-man. Plus, the whole shebang is shipped in a single cardboard box so massive it took two people to heave it indoors. The delivery driver was not amused.

The drums are described as six-ply 'Eastern sugar maple'. That's a new one on us. Kits made using Chinese maple aren't uncommon and the assumption is that it's inferior to the North American species, Acer Saccharum, that graces top tackle. But sugar maple - that's sugar as in maple syrup - surely infers the same species we see on the Canadian flag?

Whether it's the exact same North American variety or as good a growth and grade, all we can say is that the grain on these drums is exceptional - easily as pretty as on an American Gretsch. The lacquering isn't as deep as the Gretsch's, but still looks good. The bass drum has matching wooden hoops (and, incidentally, rubber gasketed claws with modern inset bolt heads).

The butted seams are more visible than on top drums, but the 45 degree bearing edges are well executed. Shells are even graduated: tom and snare shells are 6mm, the bass drum 7mm.

The shells then, look amazing for the price, but the ﬁttings slightly less so. The tube lugs appear oversized, though mounted on substantial rubber isolating gaskets, and the chrome of the hoops is a little ragged on the exposed edges.

The hardware package is unbelievably generous, with loads of extra functions usually conﬁned to more expensive gear. There are some rather heavy-handed design solutions though. Take the snare stand - the ball and socket universal tilter means you can set the snare exactly how you like; it's actually more flexible than most top models with their geared ratchets. However, the cradle section is separate and sits on the middle, height-adjustable section, which means you're lumbered with three heavy sections instead of the usual two.

All stands are double braced, the hi-hat and bass pedal have double drive chains and colossal base plates. The clamping wing nut for the kick pedal is thankfully located on the side, not underneath. The hi-hat pedal has calibrated spring adjustment from one to 10, albeit on an oversized plastic ring. Then there are two huge cymbal stands that function as straight-up or boom, with nylon inserts at the height joints, contoured memory locks and ergonomically shaped wing nuts.

There's a three-hole tom mount for the two top toms plus a central cymbal arm. It's a similar design to Yamaha's System hardware - cruder, yet still solid - and supports the RIMS-style isolation brackets.

Since everything comes in the single shed-sized box you have to assemble it all from scratch (snare excepted) and there's no instruction leaflet. Here's a tip: when seating the steel hoops, make sure each tension bolt is loosely threaded before tightening any single one. That way you won't ﬁnd yourself forcing rods and cross-threading.

The mounted toms are extra deep - 12"x10 1/2" and 13"x11". This is out of step with today's trend towards shallower toms. In the ﬁckle world of fashion, this set-up is a bit of an '80s throwback to the glory days of Bon Jovi and Duran Duran. Gear4 might be better advised to keep one of the top toms and add an extra floor, thereby emulating the fashionable Bonzo set-up.

The supplied heads are inevitably the cheapest money can buy. They do sound thin and pingy - when you eventually swap them for pro heads you'll appreciate the difference. We had some Aquarian double thins knocking about, so we tried a couple. The toms really beneﬁted, the twin-ply batters bringing out the powerful, warm maple tone. Likewise, the bass drum tone improves with a pro head.

Sufﬁce to say, we defy anyone to tell the difference in sound between this and a kit costing three times as much.

The extra depth of the 14"x6 1/2" snare is an appropriate match. I'd replace the radial, pull-away strainer, with its small tension knob and clunky, sharp lever, with a simple, generic side-lever job. Otherwise, given the decent six-ply shell with smoothly graduated snare beds, performance exceeded expectations. The distinctive hollow, wood-block clonk of a maple snare was gloriously present.