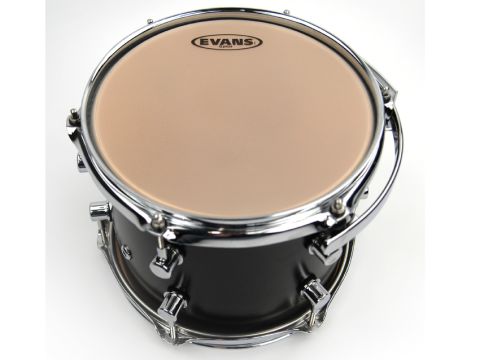 The Evans G-Plus drum single-ply tom heads are a revelation in design that live up to every claim the manufacturer makes about tone, sustain and durability. These aren't just mere heads, they're instruments in their own right. Whatever you're currently using, do yourself a favor and give these outstanding heads a try. You just might become a convert, as we have.

Testing the patience of the good folks at Evans, we waited a full two months to do this review. Why? Because after receiving an array of the new G-Plus drum heads and slapping them on a kit, they simply seemed too good to be true. Surely, these things would give out and disappoint in a matter of days. Right?

Wrong. Quite literally, these are the finest heads available today. Evans has outdone themselves and all others in the design and construction of tom heads that should, if all is right in the world, revolutionize the business. Yes, they're that good. They're that great.

The Evans G-Plus series are constructed from a single-ply of an exclusive 12-mil film and come in either clear or with a most attractive translucent frosted-style coated finish. They are available in sizes 6" - 20". The theory behind these heads is that they provide warm tone, ample sustain, a denser kind of attack and the kind of durability you don't get from other heads. In addition, they're described as being versatile enough for jazzers and rockers alike.

Hands on
We tested the G-Plus frosted-style heads on a variety of drums, but mainly we applied them to a Gretsch kit. The first thing we noticed was the tuning - or the lack of tuning needed. Rarely - no, make that never - have we come across heads that require no fine tuning, no persnickity back and forth, no endless "this lug side sounds different from that." Astonishingly, we were able to put on each head, tune it to a desired tension - in our case, low, as we don't like tight jazz-style tensions - and boom! there it was. A drum the way a drum should sound. What a dream!

Now, here's why this review took two months: We noticed that, in a week's time, the heads began producing a louder and richer tone; they cut through the music we played along to (a four-piece band and a stereo cranked good and loud) and blended astonishingly well, but with each passing day the sound improved. Forget about dampening rings and moon gels - you won't need them with the G-Plus heads. Two months later, we're still playing the same heads, and they're better than ever - crisp but not too bright, full and rich but with a musical tone. They sound like perfectly EQ-ed drums you'd hear on a professionally mastered album, but they still have a bounce and a live-room quality. Unreal.

We've gone through at least six, possibly eight pairs of sticks while playing the G-Plus heads, and we still have yet to notice a scratch, ding, worn-out spot - you name it. We haven't even needed to tighten the snare tension. These heads seem to mold and adapt to both your drums and your playing style. And again, the musical qualities they produce cannot be overstated.