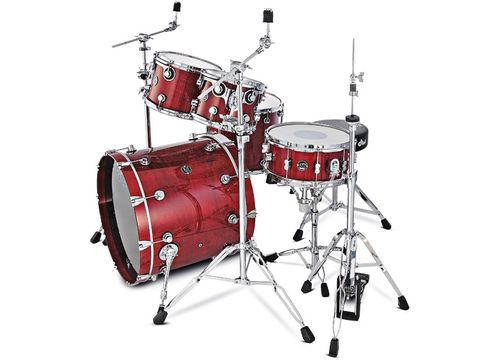 Taking a premium brand into a lower pricepoint can be tricky - get it wrong and the prestige of the name could be permanently undermined. However, DW seems to have got the Performance Series spot on. The kit is located ﬁrmly in pro territory; the standard of the shells and components is unquestionably high and the usual DW details abound. While being distinctive enough to stand alone from other DW products they are clearly DW drums. Without testing the drums alongside a custom DW kit it's hard to say how they differ tonally, but the sheer quality of the sound they produce is on the money.

DW's reputation has been built on manufacturing high-end hardware and custom drums. In recent years new ranges of pedals have broadened the company's presence in the hardware market, but until now DW's drums have only been available on a made-to-order basis.

The Performance Series represents a new era for the company as it is the ﬁrst range of DW production drums and drum kits.

Launched in October 2010 by a mass gathering of A-list DW endorsees, the Performance Series spent over two years in development. From the outset, DW didn't want to produce lesser versions of Custom Shop DW drums; the new range had to have its own sound and look.

There are obvious design clues that signal the drums' status. Most prominent among these are the Quarter Turret lugs which are smaller versions of DW's classic lug. Also scaled down are the bass drum claws, which resemble Collector's Series' claws in every detail except size. DW's iconic logo, which is found on the bass drum front head and the individual drums' badges, has been subtly tweaked to distinguish the Performance Series from other DW ranges.

The shells are made from the same stocks of North American maple used for DW custom drums. A new shell construction method - designated HVX - has been devised by John Good and is exclusive to the Performance Series. HVX shells utilise knowledge gained through DW's existing custom shell options such as VLT and X-Shell and incorporates elements of them into the design. The majority of the available drums (10"-16" toms and all bass drums) have 8-ply shells - the exceptions being the 8" tom (7-ply) and snares (10-ply).

John Good reckons HVX shells deliver low fundamentals with plenty of natural resonance. The review kit was made at DW/PDP's facility in Ensenada, Mexico and the bearing edges are precisely cut at DW's standard 45°. A choice of ﬁve lacquer ﬁnishes are available; the stunning Cherry Stain of the review kit is without a doubt equal to any custom DW ﬁnishes that we've encountered.

DW has announced that production of the Performance Series is to be transferred to the company's HQ in California, so by the time you read this the ﬁrst US-made Performance Series kits should be on their way to dealers. This will no doubt add to the Series' kudos (being both DW and American-made); nonetheless the drums on review were expertly constructed in Mexico.

We've always found DW bass drums particularly impressive and the Performance Series' kick didn't disappoint. From the moment we attached a pedal, the drum produced deep, saturated slabs of low end. The only tuning that was required was the tightening out of a wrinkle in the front head. Like all DW bass drums, this drum has a pillow ﬁtted inside which keeps the sound tight and focused without completely smothering its natural presence.

In acoustic settings it powered through solidly against the usual grind of ampliﬁed guitars and bass. Miked up in a live situation it conveyed low frequencies with warmth and aggression. The snare fell in step with the bass drum perfectly, blending sharp attack with a thick woody note. Its physical depth translated into a full, throaty response that verged on the belligerent when required and was still suffused with natural authority at lower dynamics. Each stroke was clearly enunciated, the response remaining faithful right into the edges.

A common observation at the drumstar-studded launch was that Performance Series drums 'sing'. This is particularly true of the toms, which combine the sweetest of notes with exceptional clarity and smooth decay. In fact, this particular trio of toms and their spread of frequencies seemed versatile enough to cover any conceivable situation.