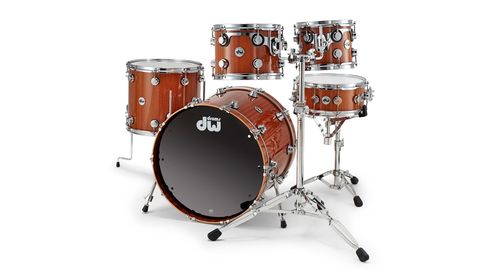 DW continues to refine its already awesome Collector's Series, with this new attractive hybrid of cherry and mahogany offering a subtle variation of warm, sensitive and concise tones.

DW had previously used cherry as an outer veneer, but now for the first time includes cherry as the sole wood in its Pure Wood series.

So what we're reviewing today is basically a cherry kit with a mahogany veneer.

DW's Collector's Series are custom-built drums of the highest order. The mahogany exterior is the first thing that grabs your eye. The vertically-set straight-grained mahogany is not one of your more exotic multi-coloured swirling numbers, but the familiar rich reddish-brown has its own allure.

There are both outer and inner vertical veneers of mahogany, though the full ply lay- up varies from drum to drum. Toms have nine plies, bass drums 11, snare 14.

Each ply is 1/36" and the cross-laminated cherry is cocooned within. Incidentally, you can specify the cherry as the outer ply if you really want, in which case the mahogany becomes the second inner ply.

As we saw with the Pure Cherry kit last year, the high gloss lacquer finish is exceptional. The cliché 'glassy smooth' is really the only description that does it justice. Bearing edges vary according to drum size and function.

Toms are 45° with an 1/8" roll-over; bass drums are 60° with a heavy counter-cut. The snare is also 60° but with a slighter counter-cut, barely noticeable.

To examine these edges it's necessary to remove a head or two. This is where you encounter DW's True Pitch tension lugs which have 50 threads per inch, significantly more than most others on the market.

This should allow for greater tuning accuracy, but boy does it take forever to unscrew a head. The fine threads hold well, but you need to be careful, particularly with the extra-long snare and bass rods, to line them up so that you don't cross threads.

Once you finally get the head off you're greeted by the wonderful fresh pong of glue/sealant. The inside of any shell is revealing and these are impeccable examples of the drum builder's craft, with superlative, painstakingly finished bearing edges.

The small toms have STM (Suspension Tom Mount) isolation brackets and the floor tom has three legs, which DW can supply in various lengths, handy with these modern, quite shallow floors.

Just to emphasise the thought and extra-mile DW travels, there is an owner's welcome package that includes nine spare tension rods and three drum keys - one a power drill bit for those extra-fine threads. Plus there's a handbook leaflet, large polishing cloth, bass drum hoop protector and two spare memory locks. There's even a hardback book, the DW Family Album 2000 To 2010. It all enforces the feeling you're investing in a package of lasting value.

But you'll be wanting to know about the sound. Well, the main thing to say is this is a precisely constructed kit.

The shells are round and the bearing edges textbook - so the short answer is it sounds as good as a modern kit gets. Scott Crago, with Eagles legend Don Henley, says, "My drums are absolutely killing out on the road. Don is in love with this kit!"

Paraphrasing DW's John Good, vertical (any wood) ply drives the pitch down and mahogany has a warm musicality. Cherry has a darker sound, so the two complement each other well.

So how does that apply to these new toms? Well, fitted with single-ply DW-Remo Clear batters we feel that the cherry has something of the hard-edged attack of birch, where the vertical mahogany warms the tone and brings it down a bit.

The shallow floor tom has a real blast to it, though it feels controlled (like birch again) and it doesn't rumble on or need much damping. Even with the single-ply heads you can play all the toms wide open.

The drums are sensitive too - approach them softly and they still articulate clearly with the tone opening up immediately. We like the toms best when top and bottom heads are roughly the same tension, where the sustain is longest with the truest tones.

Inside the bass drum DW supplies two pillows touching front and back heads. Reviewing the Cherry kit last year we felt that this was too much. But that was a traditional 22"x14" drum and with this modern 22"x18", the immediate feeling is it's studio/ stage-ready.

There's quite a crack followed by just the right amount of dusky resonance, again with a controlled, relatively brief decay.

The batter is the usual clear Powerstroke-3 style Remo-DW, while the black front logo head is intact except for six small strategically positioned 1⁄2" holes.

The drum emits a lovely tone with woody depth and we really didn't feel like altering the set-up at all.

Right out of the box also comes the best-sounding DW snare drum we've ever been sent. In fact, all the drums arrive well-tuned, which makes a big impression.

It inevitably colours your perception if the drums sound good (or crap!) straight away. Well, the 14"x51⁄2" snare needed no tinkering, it just sang. Mahogany is warm, but the cherry seems the dominant voice, sharp, crisp and medium loud. Side-sticks are equally tasty, pealing out, rounded, yet cutting and clean.

It's a heavy drum with its 12-ply shell and thick-set hardware. It's impressive though - the DW Mag (magnetised) strainer and butt casting are precisely engineered and lavishly chrome-plated.

Operation is smooth and between the tension knob on the strainer and the three-position lever on the butt end there is a wide range of snare effects.

When struck dead centre there is still loads of ring, from both the shell and the hoops. The 5.5" depth allows wide tuning from snappy to a relatively deep wet slap without getting sludgy. Rim shots are crackingly Krupa-ish.

The 10 tensioning points are numbered around the batter head, a detail that is unnecessary on an eight-lug drum, but hands up all those who have got lost criss-crossing a 10. It's just another example of DW's mission to ease every aspect of a drummer's job.