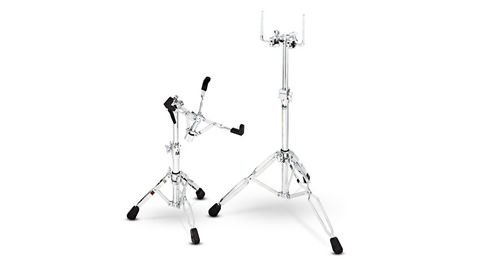 Like all the best ideas, Airlift stands are ingeniously simple yet brilliantly effective.

DW's Airlift tom and snare stands are based on 9000 Series stands from the company's flagship hardware range.

Originally conceived by hardware and internal miking specialist Randall May, Airlift technology is already found in a pair of DW thrones.

Airlift is a technically straightforward - if fiendishly clever - concept. Housed within the main tubing of each stand is a type of gas strut, similar to that found in a car's shock absorbers.

Aside from this hidden extra, the stands are identical to regular 9000 series versions and feature the same heavy gauge tubing and solid double-braced tripods.

By design, the gas struts resist being compressed, so with either stand unloaded, pushing the top tube into the base tube takes a bit of effort. However, once the weight of a drum (or two in the case of the tom stand) has been added, things balance out, with the drums feeling as though they are floating on a bed of air. Pulling them up or pushing them down to the correct playing height becomes a simple, one-handed operation.

We have to confess that we approached the stands with a hint of cynicism. Then we recalled the countless times we've found ourselves leaning from a playing position over the front of the kit trying to unlock a tightly closed wingnut, before bearing the entire weight of its contents in an effort to adjust its height; hardly an ideal way to warm up.

We soon found ourselves converted to the joys of setting the tom height with a couple of fingers (that's how much control Airlift gives you) and raising the snare without having to stand on the tripod while burying my face in the batter head.

Airlift brings out the obsessive lurking in almost every drummer - want to drop the toms by 5mm precisely or swivel them through exactly 8°? Done.

DW says that the gas struts add a minimal amount of weight to the stands but being 9000 Series, you're going to know that they're in your hardware case. Airlift stands don't require any maintenance or lubricating, and can be separated for packing.

While being indisputably user-friendly, the asking price makes them something of a luxury accessory; hopefully DW will consider introducing Airlift technology to its other hardware ranges.