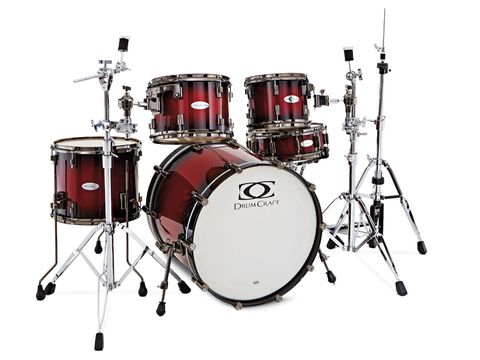 GEWA clearly has serious aspirations for DrumCraft, as this kit demonstrates - it's definitely a brand to watch.

DrumCraft is a relatively new drum brand conceived by German music industry giant Gewa. Though UK distribution only began in the spring of this year, DrumCraft kits have been available in mainland Europe since 2009.

Gewa was founded in 1925 by Georg Walther and has since gone on to become one of the biggest musical instrument manufacturers and distributors in Germany. In the words of product manager Winfried Holl, Gewa is no stranger to drums and percussion, and DrumCraft is an ambitious project featuring original designs and high specifications.

"By the time the 14" floor tom is reached, window-shaking territory is on the horizon."

Initially consisting of three ranges - 4, 6 and 8 Series - a fourth series (7) has since been introduced. Sent for review is a maple-shelled kit from the range-topping Series 8.

Gewa's market experience has been invaluable in trying to crack the perpetual quality/affordability conundrum. Its solution is to pen all of the designs in-house in Germany and then assign the manufacturing to a dedicated facility in China.

This fusion saw DrumCraft win a prestigious Red Dot award (an international design competition presided over by 30 judges) in 2010. Such an approach also makes DrumCraft kits highly competitive, as this pro-spec Series 8 kit comes in without hardware at below £1,200.

The maple of the review kit is genuine North American rock maple and sports a classic honeyed appearance and some lovely grain flourishes. The shells vary in ply according to drum, with toms being 6-ply/4.8mm, bass drums 7-ply/5.6mm and snares 8-ply/6.4mm.

Shell construction is through standard cross-laminating with vertical joins. The inner and outer plies run horizontally on all of the drums, except for the snare which has a vertical ply on the inside.

A quick check on shell roundness finds most of the drums to be within a millimetre of trueness at most (the bass drum's tolerance is understandably a fraction larger), which is excellent going.

Bearing edges are cut just inside the outer ply at 45° with a fine backcut. Across all the drums they were cut with perfect accuracy.

The Cardiac Burst finish - a sumptuous red sunburst emerging from black borders - is one of two high gloss lacquer options. A further five matt lacquers (four coloured and one simply clear) are available.

Tied in with the gloss lacquers is the black nickel hardware seen on the review kit, while the matt lacquers come exclusively with satin-coated chrome hardware. It is possible to deviate from the offered finish/hardware combinations, but doing so transforms the kit into a custom order with an inevitable rise in cost.

We think the offered pairings work well; the satin hardware adds an understated sheen to the blocks of matt colour, while the black nickel sits harmoniously with the darker edges of gloss finishes. On the review drums the black nickel coats virtually every piece of shell hardware with the notable exception of the DrumCraft badges, which make a bright counterpoint to the otherwise sultry glow of the drums.

The lug design owes something to the German Bauhaus movement of the early 20th Century, in particular the group's idiom that 'form follows function'. Drums are cylindrical and the lugs have evolved to reflect this in a stepped semi-circular moulding.

The die-cast bass drum claws are a further extension of the shape; the end caps are completely round, so from the front the drum's hoops appear to be punctured by series of metal cylinders. It's a strong visual statement - simple yet powerful, with almost industrial overtones.

The same design motif crops up elsewhere on the kit, including the floor tom leg brackets and tom arm locking assembly. All this metal means that the drums are not the lightest examples you'll encounter, but there is something reassuringly solid in such an attribute.

Solid was the first adjective that came to mind when playing the bass drum. With the heads fitted and a small port cut to eliminate a minor ringing it produced a deep, just-the-right-side-of dry note.

The initial impact decays rapidly, leaving darker and warmer tones lingering on. Tuned low it gives a shuddering response that would be difficult to capture through a microphone.

Tightening the heads brings an added focus that doesn't dilute its presence in the mix. Regardless of the tuning it's a drum with a consistent feel - big-sounding without being clumsy, and loud but not over-dominant.

Genuine American Remo heads, rebadged as DrumCraft, are fitted across the kit. You'd expect the clear Ambassadors found on both sides of the toms to provide an equal balance of attack and tonality and the toms project easily, cutting through quite brightly.

Beneath the opening peal lurk surprisingly full notes which give an impression of depth, even on the smaller toms. Sustain is clean and, with no dampening involved, pleasantly long.

By the time the 14" floor tom is reached, window-shaking territory is on the horizon. As the floor tom represents the biggest tom diameter on this particular kit, we can only speculate at the kind of detonations that 16" and 18" Series 8 floor toms might be capable of.

The snare comes with a Remo Controlled Sound X, a 12mm coated head with a 5-mil reverse black dot (attached under the head rather than on top) and thicker 2.5mm triple-flanged hoops. Hit inside the dot it gives a sharp response that slices across with surgical precision.

Once outside the area of the dot some of the power is traded for a looser, more open feel. Here the snare wires buzz more and overtones are free to bloom beneath the figures.

It's a versatile drum; one that is happy slamming out penetrating backbeats one moment then summoning up a livelier, more expressive side the next. Inevitably it's at its most responsive at tunings towards the higher end of the scale, but still remains bitingly keen at lower tensions. A deeper-shelled version of this drum could only be even more imposing.