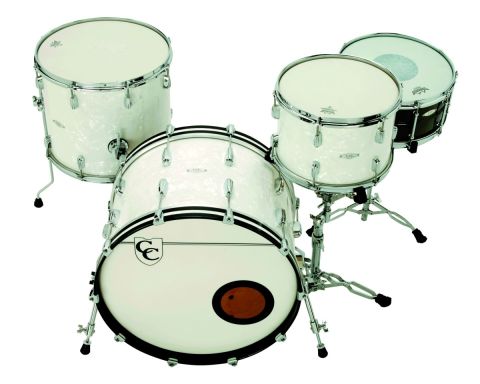 While C&C might be a new name to the UK, it's already familiar to players-in-the-know in the US (plus Johnny Craviotto, for whom Bill Cardwell has finished drums, and Ringo Starr to boot), and Bill´s gear is up there with the best of them. On the evidence of this long-awaited set-up, C&C are poised to take on the world. In their own quiet fashion, of course.

The C&C story so far is a heart-warming one, involving The Beatles on Ed Sullivan, cotton picking and one of the greatest progressive rock drummers of all time. You can read the story direct from the drumwright´s mouth at the official C&C Drum Company website - the tagine ‘Welcome To The New Vintage´ is a succinct one-line description of what the owner Bill Cardwell and his cohorts are all about.

Looking at this frankly delicious assemblage of drums here, it seems a slogan well chosen. Unfussy, extremely cool and beautifully crafted, the kit exudes an air of quiet confidence and promises great things once it is set up and ready for action. Before we go any further, we should point out that this set is a working example belonging to Owen Hopkins from The Crimea rather than a stock kit.

Anyway, down to business. The 22"x14" bass drum refreshingly bucks the trend for super-deepness and is paired with 13"x9" and 16"x14" toms and a sweet 14"x6½" black chrome over brass snare. Of course, you can have pretty much what you want in terms of finishing, and there´s a choice of lugs, hoops and hardware on offer as well - that´s true ‘custom´ for you.

Speaking of options, C&C offers a series of shells designed to please different punters. The company´s ‘standard´ is eight-ply toms with a 10-ply kick drum, created for fullness and volume at everything from club to arena-size venues. For the less rock-oriented, Bill´s boys will also build you six-ply shells with 10-ply reinforcement rings for what is described as ‘a warmer, muted tone reminiscent of the classic Ludwig, Slingerland, Camco and Rogers drums´.

The drums that make up this four-piece feature the eight-ply toms and 10-ply kick shells in hard rock maple and are finished in wonderful Antique White Marine Pearl. Or least, the bass and toms are. As mentioned, the snare here is a brass-shelled drum and is fitted with top-notch goodies including Puresound Blaster wires and Nickelworks snare strainer. It´s hardly an ostentatious instrument, but as with the rest of the drums, you just know it´s going to be a steel fist in a velvet glove in terms of performance.

"The 14" depth of the kick means a lovely speedy response that can be made quite aggressive with sufficient force, all the while retaining a sweetness of tone that´s sometimes missing from bigger types".

The drum does not disappoint. If you´re a dyed-in-the-wool wood snare lover than one of C&C´s maple or birch types will suit you better, but if you´re persuadable either way, this is a stunner. It´s energetic and strident, sensitive and strong-voiced and the 6½" depth adds muscle without requiring you to work hard to get ghost notes to pop out. It´s safe to say that it´s perhaps more of a rocker than the shallower versions would be (we´d imagine the 4" shell would be heavenly for funk and hip-hop), but it´s a rocker with class, not a greasy loudmouth with no style.

The 14" depth of the kick means a lovely speedy response that can be made quite aggressive with sufficient force, all the while retaining a sweetness of tone that´s sometimes missing from bigger types. Aquarian´s Super Kick 3 heads are fitted here and there´s a definite sense of head and drum working together to come up with more than the sum of their parts.

In lesser company, the 13" and 16" toms would overshadow the rest of a kit. These are just gorgeous drums to play and work with - they´re flexible and easy to tweak and it´s virtually impossible to make them sound anything less than world class. As with all the best-sounding drums, the tone seems to emanate from an area around the toms, rather than simply being created within the confines of the shells themselves.

Fruity and woody, there´s definitely an aura of the classic about these drums; but with an active front end to the attack of each stroke, the toms avoid sounding too cloying or hesitant. It´s a fine balance but one that C&C has struck right on the money.

Reviewing drums from a maker that operates on a ‘tell us what you want and we´ll do it´ basis is tricky. One kit gives only a snapshot of what the company is about, but when stuff is this good, it can´t help but put your mind at rest that whatever you´re after, the manufacturer will come up with the goods. Bearing in mind that C&C´s user list includes My Chemical Romance's Bob Bryar and Sparklehorse gives a further idea of the diversity of sounds their drums can produce.

Kits such as this are a lifelong proposition - and a wonderful life it´ll no doubt be.