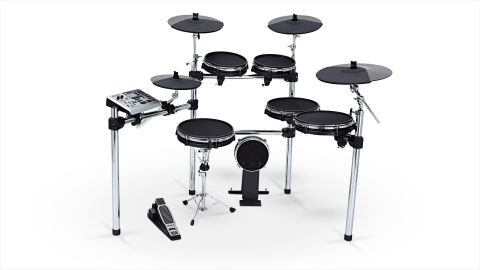 The DM10 X Kit Mesh is a comprehensive yet cost-effective set-up with the ability to load new sound sets, offering future-proofing and great value.

Earlier this year at Musikmesse Frankfurt, Alesis announced two new e-kits centred round its flagship DM10 drum module. With the introduction of mesh heads on the new kits, the DM10 Studio Kit Mesh and the top-of-the-range DM10 X Kit Mesh are said to offer an improved playing experience.

For this review we have the six-piece DM10 X Kit Mesh which, in true Alesis tradition, boasts a wealth of incredible features at a wallet-friendly price. This kit is a prototype. Alesis tells us that it will be making some minor cosmetic tweaks on the final vision.

This particular kit sports three 12" pads, one for the snare drum and two for the 'large' toms, two 10" sized for the 'small' toms and an 8" bass drum. Alesis has certainly pushed the boat out here, with its flagship kit entirely decked with tightly woven mesh heads. The internal sensing components of the meshed pads have been redesigned, enhancing the trigger and stick response.

The DM10 comes fully loaded with over 1,000 inspired samples - all at 24-bit resolution. It's worth noting that this particular module was the world's first with the ability to be able to load completely new sound sets. Additional sounds may also be accessed by connecting to an iPad or any standard home computer via the USB port.

The module boasts the same great features, including FX and multi-sampled drum sounds that contribute to Alesis's impressive realism technology. 'Dynamic articulation' is the Alesis method of subtly altering the various nuances of timbre according to the position of the strike and its velocity.

Facing away from the player, the front panel is packed with an array of sockets - half of which are allotted for the 12 trigger inputs and a hi-hat controller. Other connections include two standard five-pin DIN sockets for Midi In and Midi Out, which is great for anyone wishing to connect old-style Midi equipment.

There is also a single USB socket - the gateway giving the DM10 access to the outside world - essential for downloading sound sets or accessing third-party software apps. Also, the DM10 is compatible with the iPad and Mac software with the additional software this offers.

Like the non-mesh versions, the snare and tom pads are formed from injection- moulded ABS. Each of these is fitted with a standard triple-flange hoop and head- tensioning bolts, which apply tension to the tightly woven black mesh heads.

Peering in through the mesh, it's possible to see the four-point triggering system, which consists of four upright pillars attached to a Piezo-type transducer. A second transducer is attached to the pad base, and together these detect the intensity and position of each strike: drum head, rim or both.

The complete e-kit comes in a single bulky box that weighs more than enough to make your courier cranky. With everything out of the packaging, it doesn't take too long before the sturdy XRack frame is set up, each pad is in place and you're ready to play. The intuitive DM10 graphics make getting yourself up to speed simple and you're soon immersed in the well-crafted onboard songs and great drum sound.

The DM10 module itself will be subject to a few tucks and tweaks via firmware - at the time of going to press, we are awaiting the latest release. However, we are promised that the module will be fully optimised for mesh heads. This will prompt the user during the initial set up, giving additional pad parameters for head type and individual pad size. For now we are using the basic input type as 'Piezo' and see how it goes.

With the mesh heads reasonably taut, the stick response from each drum pad is pretty much as we would expect - more rebound than on conventional heads and certainly a whole lot more than offered by the pads of the DM10 X Kit reviewed a year or so ago.

Although we have played on numerous electronic kits, this is the first time we have used mesh-headed pads with the DM10 module, and its response is remarkable.

Bearing in mind that the module is not yet fully optimised, it appears to process ghosted notes and buzz rolls with confidence. There is no discernible cross-talk, even when you are hitting hard, and no loss or misplaced strikes to be concerned about.

As a pair of 5As dances on the mesh heads, the speed at which each strike is interpreted is extremely good. When swapping to the slightly heavier 5Bs the sound alters sufficiently, conveying an acceptable representation of how a real drum would respond.