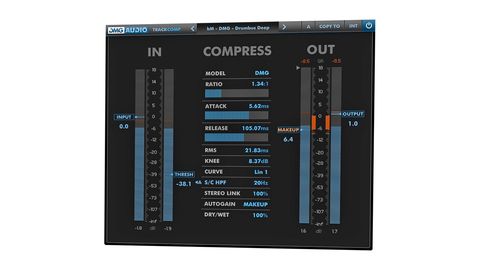 Adding to DMG’s ‘Track’ series of mixing plugins, TrackComp is a dynamics processor (VST/AU/AAX/RTAS) that employs SPICE simulation to model four classic analogue hardware compressors and an original digital design. SPICE, in DMG’s words, “creates a mathematical description of the unit from the circuitry itself, yielding a result as accurate as physics”, and the company has optimised it for real-time usage with zero latency.

It’s not the first time SPICE has been used in an audio signal processor, but DMG is one of the biggest names in plugin development, so its adoption of it is a milestone of sorts.

Of course, the modelling going on in the background is also completely different from compressor to compressor, capturing the particular sound and response of each, but controls that can remain the same when changing model do - Attack, Release, Stereo Link, Dry/Wet, etc - enabling easy flipping between them. As you’d expect, however, Ratio isn’t universal by any means, with G-Bus offering 2, 4 and 10:1; 76D offering 4, 8, 12, 20:1 and the nuclear ‘All-In’ option; 2A switching between Comp (about 4:1) and Limit (infinity:1); and DMG and E-Channel both sweeping through the same huge range from 1:1 to infinity:1.

TrackComp’s awesome DMG compressor model is in fact the simplified version of DMG Audio’s super-deep Compassion, previously due for self-contained release under the name COMPact. It differs from the other four in that it’s an entirely original, software-only design with none of their analogue colouration. It also has quite a bit more going on in terms of response shaping, with four extra parameters on top of the common set.

The RMS control adjusts the timing of the RMS detection circuit, from peak response at 0ms towards RMS response with a 1000ms ‘window’ at maximum. The Knee slider goes from an instantly transitional hard-knee at 0dB to a much more laid-back soft knee at 12dB; and the Curve menu houses seven response curve shapes (three logarithmic, three linear and one ‘S’ combo). Finally, the same sidechain filter as that of the SSL models is also onboard.

The Attack and Release times run from 0.01- 200ms and 0.1-8000ms respectively for all models, but the minimum and maximum values of the original hardware boxes (or sensible representative defaults from the wildly variable LA-2A) are marked with red lines, to which the sliders snap to when the Alt key is held while dragging. It’s a clever way of facilitating accurate emulation while still serving up an extended, more ‘modern’ range.

The model-specific controls take in such niceties as sidechain high-pass filters for the two SSLs, Response (essentially another sidechain HPF) and Brightness for 2A, and 76D’s Q-Bias FET calibration setting (from a smoother sound at -5% to heavy crunch at +5%). The DMG, not being based on a real-world unit, stands apart in this regard with its detailed response parameters, as discussed in the boxout.

TrackComp’s quartet of vintage emulations is a rich solid-state spread that takes in VCA, FET and opto devices, and while every one of them has been done arguably to death already by any number of equally capable developers, having them all in one place alongside the DMG model is great.

Most importantly, though, they all sound superb, the emulations nailing the characteristics of their inspiring compressors within the original parameter ranges (the SSL bus compressor glue, the LA-2A weight, the 1176 bite...) but taking them to interesting new places when pushed beyond; and DMG being supremely clean, transparent and versatile. At this price, TrackComp is a no-brainer.