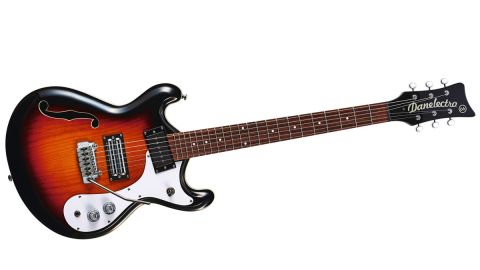 If you still regard Dano guitars as retro, one-trick ponies, the ’66T’s double whammy of rock-star good looks and modern performance will set you straight once and for all.

Back in October 2017 we ran a review of the original Danelectro ’66.

A hardtail reboot of the cult mid-60s Mosrite Combo model, the semi-hollow ’66 was a radical move from a brand that is best known for picking clean the bones of its own back catalogue. Aside from the lipstick-tube bridge pickup, aluminium top nut, not to mention the logo on the headstock, the ’66 is not your classic Dano. It is, however, very bloody good, so word of a new variant was met with enthusiasm ’round these parts.

At first glance, the new ’66T has the cool Johnny Ramone vibe of its predecessor, albeit with a Wilkinson vibrato chiselled into its top. Like the ’66, this new model features a semi-hollow alder body with plenty of eye-candy including a f-hole, cream binding and some beautiful German carving around the edges. The bolt-on maple neck carries a 355mm (14in) radius rosewood fingerboard, 22 medium frets and vintage Kluson-style tuners.

The ’66T also comes with its older brother’s pickups and wiring loom. You get a lipstick-tubed humbucker in the bridge position and a fat-looking Mosrite single coil at the neck. While both pups are wired through a master volume, master tone and a three-way pickup toggle switch, the bridge ’bucker can also be split via a pull/push switch on the aforementioned tone pot.

Okay, the apple didn’t fall that far from the family tree when the ’66T was in development, but there are a couple of important changes that you might not pick up on right away. Take a closer look and you’ll see that the ’66T doesn’t possess its predecessor’s zero fret or the classic Dano aluminium top nut. Both of these tweaks, the slippery graphite nut in particular, are an obvious attempt to reduce string drag and allow the Wilkinson vibrato to return to pitch.

This guitar has the kind of string height only a particularly flexible aphid could limbo under, yet there’s no choking or buzzing to put you off. The downside to the flatter radius is that it’s harder to dig in when you’re noodling above the twelfth fret. That might steer all you blues heads away from these guitars, but the tone on offer will reward your perseverance.

Tonally, a Dano sits somewhere between a Telecaster and a Rickenbacker 330. Any way you slice that, you get bags of sparkle and presence that responds beautifully to compression and light overdrive, particularly on the coil-split setting. As we discovered on the old ’66, the knobs are fiddly, so engaging the coil split on both new Danos takes the edge of a pick or a fingernail. It’s worth the effort. You get a great Tele-like twang with the bonus of the springy vibrato.

Running the ’bucker on full power allows both guitars to find a classic rock or even metal voice. Add in the warmth that the neck P-90 brings in and you’ve got a fantastic tonal palette to work with.

When we put the hardtail ’66 through its paces it behaved itself impeccably, at least until it received a clip ’round the earhole when we spotted the price tag. A year on, we’ve made our peace with the RRPs. Face it, you’re going to get a deal on a ’66T anyway and, besides, the versatility, build quality and tonal charms of this guitar make it worth the money. We’d still have liked a case though.