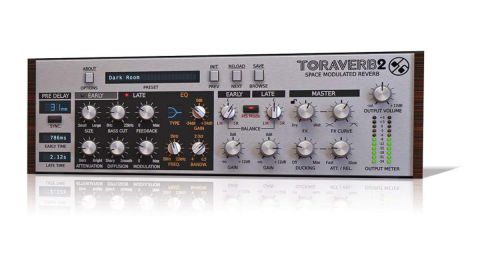 Even at its increased price-point, Toraverb 2 is still one of the biggest bargains in music software - don’t miss it.

Still, we assume, a member of the affordable SilverLine family of plugins, the second generation of D16’s spangly algorithmic reverb plugin comes eight years after the launch of the first.

Toraverb blew us away with its stunning sound and great value, and while one of the biggest changes made for Toraverb 2 (VST/AU/AAX) is a doubling in price, the hope, of course, is that the new features will balance the scales and maintain the VFM factor.

For v2, Toraverb’s layout has been rethought and rebuilt from the ground up, not only to accommodate several added knobs, but also to streamline workflow and make it more logical. The Early and Late Reflections controls - previously all visible at the same time but now too numerous in the ER department for that to be practical - are each tabbed in a shared panel. As before, both incorporate a single parametric EQ band, but this has been expanded to include high and low shelving options alongside the established bell filter shape.

The rest of the adjustable Early Reflections parameters now number six (they totalled just three in version 1), with Size, Diffusion (the ‘flatness’ of the reflective surface, affecting the multidirectionality of the reflections) and Attenuation (the absorption of the reflective surface) joined by Bass Cut, Crosstalk and Modulation. Bass Cut is the same as its equivalent in the Late Reflections section, applying a high-pass filter with cutoff sweepable from 0Hz to 22kHz; while the all-new variable Crosstalk emulates the real-world phenomenon of sound directly audible in one ear being reflected within the physical space to be heard in both ears.

Toraverb’s mixing functions took in a balance (X-Fader) control for the Early and Late reflections, plus knobs for Wet Gain and Dry/ Wet FX mix. Toraverb 2 goes much further.

The Early and Late signals are now governed by their own Gain dials, and can be individually panned from left to right, or adjusted in terms of mid/sides stereo balance. Then there’s the FX Curve knob, which alters the mix curve of the Dry/Wet FX control, from a regular crossfade to both signals outputting 100% at the centre point, with the dry signal attenuating as FX is twisted clockwise, and wet falling away as it’s turned anticlockwise.

Best of all, though, is the Ducking section. Raising the Ducking parameter increases the amount of compression applied to the wet signal whenever the dry signal is present, regardless of Dry/Wet mix, with the Att/Rel knob setting the attack and release timing. Perfect for decluttering overwhelming tails.

In the original Toraverb, modulation could only be applied to the tail, but Toraverb 2 puts independent Modulation parameters in both the Early and Late sections, bringing a touch (or a fistful!) of organic wobble, richness and colour to both elements of the sound.

Apart from the Modulation knob, the Late Reflections section remains unchanged from that of v1, comprising Size, Bass Cut, Diffusion, Attenuation and Feedback controls, the last stretching the tail out to a continuous wash at high levels, and partnering nicely with the new Ducking parameter (see Mixing and ducking).

The rest of Toraverb 2’s enhancements are less weighty, but all welcome. The Pre Delay time can now be synced to host tempo; the Big GUI option makes the plugin usable on high-res displays; and D16’s proprietary preset browser enables searching and tagging of patches.

Toraverb was already a first-class reverb, but the finer control offered up by the sequel makes it even more of a must-have. The separate modulation of early and late reflections, ducking and mid/side mixing justify the price rise on their own, and the new GUI significantly improves usability.

Sonically, Toraverb 2 is all about the flexibility, solidity and overall quality of its diffusion network, which makes it easy to conjure up spaces and ambiences of all kinds. A couple more EQ bands wouldn’t go amiss, and clearer differentiation between the Early and Late sections with coloured backgrounds seems like an obvious tweak, but once again, D16’s superb algorithmic reverb scores full marks.