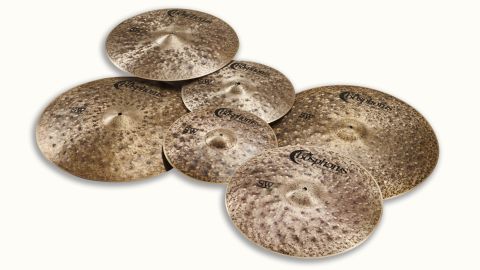 Syncopation Series cymbals combine rough-hewn looks with abundant musicality to make an excellent choice for the player seeking a little more personality in his or her set up. These are complex, dynamic and distinctive cymbals that would suit many musical genres.

Bosphorus’s new Syncopation Series cymbals are a modern take on classic Turkish cymbal design. Thin, lavishly hammered and ruggedly handsome, they are testament to what a small, effectively bespoke cymbal company such as Bosphorus can create. In the company’s own words, the dedicated and painstaking approach it adopts to manufacturing means that it ‘produces fewer cymbals for more effort’ than other cymbal makers.

Mark Law from UK Distributors Trojan Music explains the brand’s appeal: “We’re drummers and we fell in love with the cymbals; when you love something it’s easier to sell it.” He continues: “Bosphorus’s knowledge of alchemy and metal and understanding of what a drummer needs these days is profound; it’s something we can only dream about in the UK.”

Syncopation Series cymbals are available in two finishes: Regular Lathed and SW (Sand Wash). On review we have SW finish cymbals only – 14” and 15” hi-hats, 18” and 19” crashes and 22” and 23” rides. The most striking thing about the Syncopations is the amount of hammering worked into each cymbal.

Deep hammer marks - delivered from both sides – leaves the bronze resembling the aftermath of a carpet bombing raid, with only the bells being left unmarked. The SW finish is a proprietary process, the details of which Bosphorus will not divulge; Mark does his best to expand: “It’s not a lathing, it’s not a buffing, it’s a halfway house – it’s like they’ve taken an unfinished cymbal and scratched it in a unique way.”

The SW finish does indeed leave scratch marks which are similar to fine lathing bands; due to the undulating surface (courtesy of the hammering) the effect is rendered as an mashup of dark pocks and smears that would not look out of place hung on the wall of an art gallery.

Without the Regular Lathed Syncopation equivalents to compare with it’s not possible to describe the relevant differences between them, but usually the absence of lathing would point to increased stick definition and a reduction in sustain. Prices for both variants are identical for each diameter and custom requests (ie for a specific weight or thickness) are usually turned around in 3 to 4 weeks.

As with all Bosphorus cymbals, Syncopation models are individually cast from B20 bronze and then handworked through every stage of manufacture. All of the diameters on review share gently tapered profiles and well-proportioned bells.

First out of the box are the two sets of hi-hats. Starting with the 14” pair, there is an obvious complexity to the note, with much depth present - exactly as the hammering and finish would suggest. What really surprises is just how easily they cut through; there’s a toppy edge to the response that makes them genuinely assertive.

They’re also capable of serious volume when shouldered with the stick. At the other end of the dynamic scale they’re quiet and sympathetic, sketching in fine detail when required.

Depending on the closing speed, stepping gives a soft feathery ‘shuck’ through to clear sharp ‘chick’. Moving up to the 15” pair finds all of the above qualities being notched up a few degrees to produce a spectacularly crunchy and characterful set of hats. They’re darker, sloshier and even more individual, yet remain as expressive; proper hats with attitude. Intriguingly, there is a 16” set available as well...

The pair of crashes represent the two largest diameters available (the others being 16” and 17”). They both open with a sparkling blast of trashiness that resolves into a deeper and altogether moodier note. Lingering in the short sustain is delicious swirl of rich overtones.

Of the two, the 19” has unsurprisingly, a little more depth and presence, but both cymbals are capable of producing a convincing stick sound, beckoning crash/ride duties for those of a minimalist persuasion. While their tonality makes them stand out from more two dimensional crashes on the market there is an innate musicality present that suggests they’re not destined to a be some kind of effects add on.

With six diameters of ride on offer there is clearly an emphasis on providing just about every option. Size-wise, the two review models occupy the middle ground (the biggest ride available measures 26” across) and include the unusual 23” width model.

Rides are all about the stick sound and the 22” gives a warm and tangy ‘tah’ that is supported by a multilayered and eager wash. The lightest of touches provokes enticing edge wobble and it opens readily for crashing. The 23” ride is drier overall with a slightly tighter stick sound and a wash level that errs more on the respectful side.

No amount of note flurries can persuade it to unravel and it relays the most furious of stickings with composure; it’s a textbook example of a dig-as-deep-as-you-like ride. Both cymbals also elicit good strong responses from the bell, which isn’t always the case with this type of complex ride.