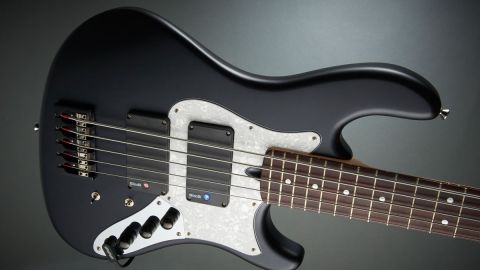 These are meant to be played, not kept in a case or hung on the wall. Check them out!

Enfield owner Martin Sims has been quick to stress that the Avenger II models will be made as stock models, a standardised range if you like, an inventory of which will always be available.

They're made in a small range of colours with standard characteristics and features, before encroaching on the territory of the pricier 'custom' models. That's not to say that certain aspects can't be changed-they can - but the price will vary accordingly.

Both of these working prototypes are fully functional instruments in every respect: the only difference between these models and those that will be made for customer purchase is that the bodies of these two basses are made from basswood, whereas solid colour models will feature a mahogany body and visible grain instruments will use alder or swamp ash as a body timber.

The two instruments carry the visual hallmarks of a Jazz, whose famous offset bodyshape works very well with the matte black finish. Although both instruments are essentially the same in many respects, the body of the five-string has been widened to keep the visual dimension ratio, due to the broader neck, in proportion. The three-ply pearloid scratchplate and chrome control plates maintain the old-school visuals, while the cutaways offer unhindered access to the upper frets of the 22-fret quartersawn hard rock maple necks.

The four-string bass has a slim 38mm nut width and a full C-shaped neck profile behind the nut, whereas the five-string instrument has a slimmer D neck profile that works well with the slowly broadening rosewood fingerboard: both basses feature 19mm string spacing at the bridge. Truss rod access on both basses is via a smoothly finished 'fall off', which makes the truss rod easily accessible without fear of causing any damage to the body finish or scratchplate.

Despite a fair amount of neck dive on both instruments, particularly the five-string, both basses balanced nicely on straps and although neither bass is overly heavy, it's good to know that the models available for you to buy will weigh less due to the body timbers that will be used. Also, these necks do not feature graphite reinforcement: Martin tells us that the neck timbers undergo a six-month damp/dry process to ensure stability.

Both necks feel supremely solid, with tight five-bolt attachments. The satin finished necks, along with the player-friendly neck camber, give the impression that these are instruments to really play and get involved with.

Abalone position markers adorn the front face of the rosewood fingerboard, while white position markers have been used on the neck edge. Nickel and black Hipshot tuners perfectly match the Hipshot A bridge and the black control set of the Glockenklang two-band EQ preamp.

The bass is switched between active and passive mode via a push/pull volume control, followed by a pickup pan control and a stacked bass and treble control, which both offer cut and boost. Interestingly, when both controls are set flat, the preamp is passive and the signal strength is totally flat. Both basses feature magnetic backplates which are easily removed and make for easy battery changes.

We've devoted plenty of page space to the Super Quad pickups in the past, but for the uninitiated, here's a summary in a nutshell. Both Super Quad units feature four separate coils, so a pair of pickups houses eight coils in total. Using the three-way switches, each unit can be switched from a split-coil operation (indicated by a red LED), to a single-coil format (green LED) to a humbucker setup (blue LED).

These are highly playable instruments: for working prototypes, they may as well be finished instruments for sale. We used both basses on gigs and they passed the live test with flying colours: both instruments exhibited great sustain and despite their obvious neck dimension differences, these instruments are comfortable, unrestricted playing machines.

If you take the EQ out of the equation and use the pickups alone, you can create  a splendidly varied tonal palette, basically allowing the coil switching options to act as tone generators, changing the tone and frequency response to the vibration of the string. From there, you can add EQ as you require.

In a band context, the different tones really stand out from one another, giving the bass not one distinguishable voice but many. Ever wanted to play a bass with two single-coil pickups? Now you can. Or how about a humbucker in the neck position and a single coil in the bridge position, or maybe a split-coil in the bridge position? Or how about a single coil alone in the neck position, like Sting and his 50s Precision? You can now use just one bass to get these fundamental tonal characteristics.

The Glockenklang preamp does a fine job of rounding out the bottom end and adding some glassiness to the treble. The low B string was reasonably articulate on the five-string: some extra mid EQ wouldn't have gone amiss. Indeed, if you require mid EQ options, you can specify a three-band EQ, and the final price will reflect this.

The simplicity of the pickup switching and the flexible tone-shaping make either bass a winner: at these prices, considering what is included in the price, anyone choosing an Enfield Avenger II as their next bass will no doubt be very pleased with themselves.

Considering the remit and design premise of the range, Martin has pretty much hit the nail on the head: strip away the custom options of the other Enfield models, get the fundamentals right and let the Super Quads do their job, and you have an instrument that works on many levels without the precious boutique tag.