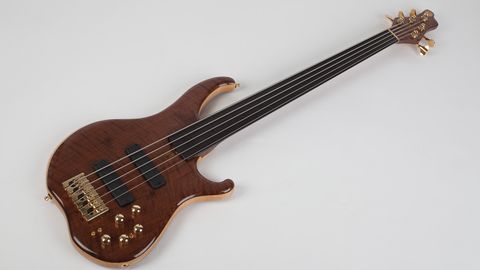 A top-notch five-string fretless with enough tonal options to cater for all tastes.

When we were asked if we'd like to review the new Anaconda bass recently, we uttered a most emphatic 'definitely!'

Although it's part of the Crusher range, this bass represents the fully customisable nature of Andrew Taylor-Cummings' instruments. These instruments, which in our experience tend to hit a pinnacle in terms of design, visuals, materials and tone, are now to receive the Zenith moniker in their title.

Although not quite as prominent as they once were, fretless basses do seem to be popping up a little more often in recent months - so how does this bass fit the bill if there is to be a 'mwah' renaissance?

Previous review models from Anaconda have all been tasty specimens and this bass is no exception, with the timber, hardware and electronics combination a real winner in all departments. The flowing lines of the chambered ash body make for a comfortable and welcoming instrument, the extensive cutaways offering unhindered access to the dusty end of the neck - which is even more dusty on a fretless five-string.

The underlying flame figuring and black walnut front and rear laminates are exquisite, the warm colouring working perfectly with the dark unlined ebony fingerboard (position markers exist on the side of the neck only) while the black sycamore veneer running between the body core and body laminates sets the timber combination off very nicely.

As a five-string, unlined fretless with a 35" scale, this bass will be a slightly daunting prospect for the uninitiated player, but in terms of tone, the timber combination and scale length promise much. The walnut and maple neck construction is rigid, while the point of attachment, using six bolts, is equally solid and robust. Andrew has created a highly playable neck, the profile rounded without being too deep, and the 48mm nut width giving the player some room between the strings without being cramped.

A pair of Bartolini humbucking P45CBC pickups have been matched with a three-band Glockenklang preamp so there's plenty of tonal variation on tap alongside the usual Anaconda series/parallel switches, one for each pickup. Let's see if this combination will capture all of the woody goodness on offer from this beauty.

At £3,500, this is a serious investment. Thankfully, upon plugging in, the tonal delivery with a flat EQ is very pleasing indeed: your sense of expectation is rewarded with a solid fretless tone. Without cranking up the mids and treble, the fundamental bass response is smooth and hearty: if you want a familiar bass tone with only a hint of fretless character, you can have it immediately.

Then the fun begins! Rolling between both pickups highlights the tonal colouring that is available from the pickups alone. Making use of the series/parallel switching adjusts the tone again, offering a thinner tone in parallel, not unlike the slimmer tone of a single-coil pickup compared to the chunkier tone of a humbucker.

Bringing the EQ into play then accentuates the voice of the instrument, while adding a strong dose of mid-EQ and some top end sparkle makes those singing fretless lines ring out. The hardness of the ebony fingerboard is so well suited to displaying the vocal-like qualities of a fretless that it's hard to consider why you might choose another timber for the job.

Although fretless bass has the ability to scare the living daylights out of some players, this particular instrument is a real joy to play and after some initial familiarisation, the Zenith really displayed its credentials. The sum of the parts really brings the most out of your playing, and variations in touch, technique, attack and general playing style are proudly communicated. The fact that the bass looks naturally sumptuous is an added bonus.

This is an instrument of the highest quality. Playability, comfort and tonal variation are all there in spades, while visually, the bass isn't over the top but quietly tasteful in a pleasing way. If a custom build is on your bucket list anytime soon, we would suggest you run your ideas past the ever-welcoming Andrew at Anaconda: you may just realise the bass of your dreams.