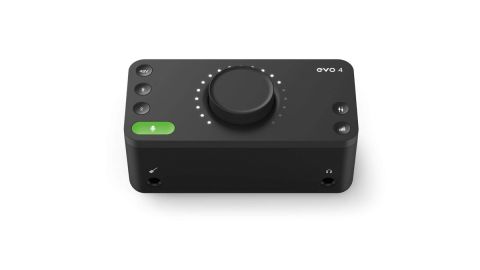 We’re seeing bigger recording names on cheaper and cheaper interfaces, and Audient’s is a great entry to the market.

Audient made their name with huge mixing desks, which found their way into many high-end recording studios, but more recently have been gaining a great reputation for their small-to-medium sized interfaces – the ID range.

These utilise some of the technology from those big desks – notably the ASP8024 preamp – for their high-quality sound. At this year’s NAMM show Audient announced the EVO range of interfaces which are not designed to replace the ID range, but more to be a completely new and compact interface solution.

Audient ask (rather than claim): is this ‘the world’s smartest audio interface?’. Maybe we can answer that for them…

We have the 4 in on test here – the larger 8 (which doubles the inputs and outputs to four each) is currently streeting for another 60 quid. Those connections aside, they look to be pretty similar concepts, that is having ‘one focus in mind, to make recording easy!’.

And on the face of it, that claim looks correct as there’s nothing here to complicate issues. There are two combi mic/line inputs around the back of EVO 4, and one instrument level input at the front for connecting guitar or bass (which then overrides the first input around the back).

Two speaker outs around the back complete the connections and a central main dial controls the level of that output plus a number of other levels determined largely by which buttons on the top of the panel you press, these being 1 and 2 (for the input levels), and output (bottom right) plus a final button that means the dial adjusts the mix between the input and DAW. Using the headphone socket means the main dial controls this level.

The EVO 4 and its bigger sibling, the EVO 8. Both feature the Smartgain feature, which keeps your recording signal levels in check so that you don’t end up recording distorted audio.

We would have preferred a more angled top but the EVO 4's design is otherwide perfect – compact and simple.

Slightly unusually in this plug ‘n’ play world is the need to download the latest driver and software which allows you to update the firmware (required for the test) which after a few rounds of LED blinking took less than a minute.

Logic then picked the interface up straight away for some very crisp playback (indeed it is comparable with the ID44 that we also have in the studio). We also tested the unit with an optional camera connection kit using Cubasis on an iPad for similarly crystal clear results.

Input recording is also exemplary, helped a little with a Smart Gain feature that helps you set levels, although to be fair you don’t really need it as such (see below for more on this).

More of a help is the Monitor Mix switch that allows you to easily blend your input signal with your DAW output so you can play along and record with your songs (made all the more enjoyable with near zero latency).

• SSL 2
More robust, bigger and expensive, but with an SSL ‘sound.’

• Focusrite Scarlett 2i2
Almost identical specs, bar an Air button for an extra top-end sheen (and an extra 20 quid).

The one-dial-its-all solution is beautifully implemented and clearly designed from the ground up to help make EVO a clever, compact desktop solution. We’re not quite sure about the box design, though. We have our interfaces set fairly far back on our desks to keep wiring at bay, so the dial and surrounding info is lost because it’s facing upwards.

A more angled top would have suited us more, but then the ID range never had this so it’s curious as to why EVO brings this to our attention!

You can pretty much forget any criticism when you look at the price and hear the results, though. Less than £100 for an Audient interface is great value, and for one of the simplest yet most prevalent of recording situations, this is one of the simplest – and, as they say, cleverest – solutions we’ve come across.

MusicRadar verdict: We’re seeing bigger recording names on cheaper and cheaper interfaces, and Audient’s is a great entry to the market.

"Too often, though, attempts to circumnavigate the technicalities of the recording process result in limited and limiting feature sets... With the EVO 4, however, Audient has created an audio interface that is genuinely simple to use but is in no way simplistic."
MusicTech.com

"The audio quality of the Evo 4 is very good. Yes, it’s true that most audio interfaces sound good these days but to my ears Evo has that Audient quality sound that I know and love"
Pro-Tools Expert