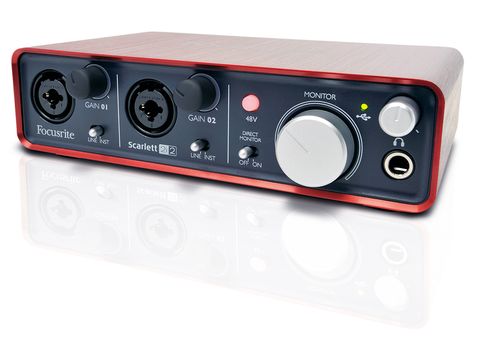 Focusrite has a well-earned reputation for building high-quality audio interfaces and mic preamps at price-points to cater to users of all requirements and at a wide range of budget points.

With its Saffire range of interfaces remaining popular but now a well-established brand, it's perhaps no surprise that a new, even more compact range has been released, by the name of Scarlett. Featuring bold styling, tank-like construction and, of course, the fabled Focusrite preamps, the question is, does it offer enough to pique the interest and requirements of a new audio interface generation?

The back panel is modestly furnished, with just the USB 2.0 connector and stereo line outputs. The main action is reserved for the front panel, where the two Focusrite preamps are presented with hybrid input ports.

These can take an XLR cable or a ¼" jack with a rocker switch below selecting between Mic and Instrument inputs. There's also a 48V phantom power button that glows a bright red when activated, which serves both inputs if you're connecting two microphones and a Direct Monitor button to feed input signals directly to the twin monitor options. These are a larger grey dial, which controls volume to your speakers, and a separately-driven headphone level dial, with its connector below.

An LED to the left of this glows to show USB connectivity and, like the majority of interfaces of this kind and size, bus-power is provided via the USB connector to ensure you don't need to be carrying an external power supply. The most intuitive indicators come as circular surrounds for the Gain dials, which select levels for the inputs, with a traffic-light system of red (too loud), orange (getting close to overload) and green (good level) displays that bring the front panel to life.

As this is an interface designed with mobile users in mind, such a clear and bright indication of levels will prove popular in low-lighting conditions and is such a neat solution, it's a wonder all interface designers don't employ similar systems.

Whereas many of its rivals have spent the last few years developing a reputation for the quality of its pres, Focusrite has no such problems, as such technology is the foundation on which the company was built.

That doesn't make the quality of the input stage any less impressive here, however, with up to 24-bit, 96kHz recording specifications ensuring that the interface won't be the reason for any poor quality recordings.

The pres are the same design as those that feature on the Saffire series and they remain as clean as ever. Any sounds with your Scarlett-fronted projects can be enhanced further with the inclusion of the Scarlett suite of plugs, which can be installed, along with a copy of Ableton Live 8 Lite, from a DVD.

This plug-in suite features Compressor, EQ, Gate and Reverb all of which offer useful parameters and are capable of some nice sound-shaping.

All in all, Scarlett is exactly what you'd expect from Focsurite - a great-sounding, well-designed interface that packs plenty of flexibility into its slender frame. A lack of digital I/O may prove a stumbling block for some but for such a modest price, this interface deserves to sell by the truckload.