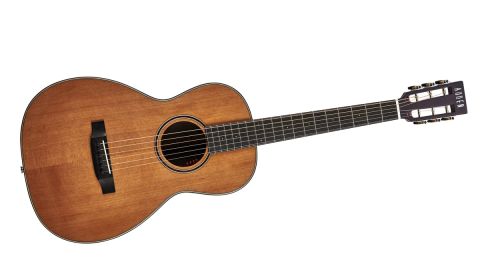 The Emily Rose gets is a stage guitar for the fingerstyle player or singer-songwriter.

One of the few Guitarist Gold awards we handed out last year went to Auden’s cracking Austin 12-string acoustic, so it was with a keen sense of anticipation that we took delivery of this intriguing parlour acoustic named the Emily Rose.

It is made with Auden’s hybrid build process, in which the woodwork is done in a small nine-luthier workshop in China, but the final neck-set, finishing and setup is completed at Auden’s HQ here in the UK at Higham Ferrers in Northampton.

The parlour-size Emily Rose, which is a 12-frets-to-the-body model with, in this particular variant, an AAA-grade cedar top. A ‘boutique parlour’ vibe is evident from the moment we open the case. The guitar’s crisply slotted headstock has a lustrous ebony faceplate and its rosewood back and sides have a clear, attractive grain pattern. Like the Austin, the Emily Rose has real ebony binding with maple purfling that adorns the sides, top and back of the guitar as well as the centre joint of the back. It’s a classy look and beautifully executed, especially as the binding is made from individual strips of wood, not a pre-glued binding/purfling composite. A final important detail is that the body of the Emily Rose is increased in depth, around 5mm, to “allow the sound to develop a little bit more in the guitar”, Doug says.

Turning our attention to the neck of the guitar, which is African mahogany, the Emily Rose has a gently rounded, shallow-C neck profile - a very pleasant and easy profile in the hand - and there’s more of that subtle fingerboard binding to add a touch of class. Doug says that the 2019 line of Auden acoustics features rolled-in fingerboard edges and the inobtrusive played-in feel of the neck lip would seem to confirm that. Build quality on this guitar is very high and we have to look very hard to find any flaws. The B string binds slightly in the nut of the Emily Rose during tuning, but it’s nothing a little lubricant wouldn’t fix.

And so onto the sounds. The Emily Rose is deceptively deep of voice. Don’t expect a D-45, but there’s more composure and depth here than we have a right to expect from a parlour. Its 44mm width at the nut is great for fingerstyle and in that mode it yields up a round, airy voice with an emphasis on the warm, focused low-end yielded up by that cedar/rosewood build. Strumming doesn’t overwhelm it - there’s a strong bass push and good clarity.

Now to the Supernatural pickup system.This is a new system developed by Bradley Clark who is the ‘Clark’ part of noted Australian guitar maker Cole Clark. Clark’s research suggested that a standard under-saddle piezo ribbon was prone to vibration that caused fizzy midrange and loss of clarity. Clark’s solution was a new system that gives each string its own piezo ‘polepiece’ and “listens to the under-saddle [area] but also the soundboard”. Fitting the Supernatural pickup is a more serious luthiery operation than with a standard piezo, so it’s only available ready-fitted on Auden’s guitars.

The Supernatural pickup is controlled via a proprietary preamp just inside the soundhole, which has three EQ sliders for bass, mid and treble; a Total Volume slider; and a mode button. The latter cycles through four EQ presets that Auden says are “tuned” to different playing styles that Doug defines as “thick strum”, “finger-pick”, “solo” and “thin strum”. You cycle between presets by pushing the button, which flashes once for Preset 1, twice for 2 and so on. It’s not hugely intuitive, but simple enough once you know the drill. Moving the sliders overrides the currently selected preset. It’s a revelation when we plug in the Emily Rose: its bass-rich voice really blooms through the amp and gives a wonderfully expansive, natural sound that we’d be happy to use on any stage.

No question, this is a fine guitar and well priced. It also has a USP to boast of in the highly effective Supernatural pickup system. The Emily Rose gets is a stage guitar for the fingerstyle player or singer-songwriter. Its small body and stellar plugged-in voice make it perfect in this role and its size will also please players who want a smaller form-factor without sacrificing tone. It doesn’t sound quite like a typical plunky parlour, however, which might not suit some retro-minded players.