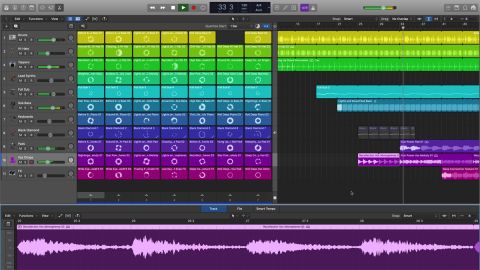 In its unstated aim of achieving functional parity with rival DAWs, Logic Pro X 10.5 adds a wealth of empowering features and systems, including grid-based clip launching and an embarrassment of sampling riches.

The arrival of Logic Pro X 10.5 - which Apple describes as the “biggest update to Logic since the launch of Logic Pro X” - has no doubt come as a welcome distraction for Mac-based musicians in need of any relief they can find from the current crisis.

And there’s certainly plenty of enticing new stuff in Logic Pro X 10.5 (free for existing users) to get excited about, as the fruity tech leviathan makes obvious but positive moves towards bringing its blockbuster DAW in line with more, shall we say, progressive contemporaries such as Ableton Live, Bitwig Studio, FL Studio and even Maschine.

To that end, the most architecturally seismic new feature is the not wholly unexpected introduction of the Live Loops system, as already established in the iOS version of Logic’s junior sibling, GarageBand.

This brings Live/Bitwig-style non-linear ’cell-based’ loop recording and playback into the picture, for compositional and experimental use in the studio, and live performance shenanigans on stage.

Then there’s the new Step Sequencer, which facilitates programming of beats and melodic lines in an interface “inspired by classic drum machine workflows”; Drum Synth, which is a very similar proposition to the Maschine 2 module of the same self-explanatory name; the redesigned Drum Machine Designer; and a complete rebuilding of the venerable EXS24 sampler as two new sample playback devices - Sampler and Simpl… er, sorry, Quick Sampler.

A potentially huge deal for those dance and electronic producers who have long found themselves torn between the supremely deep but resolutely linear workflow of Logic and the arguably less high-spec but inspiringly freeform tech-jazzery of Ableton Live, Live Loops brings the majority of the latter’s Session View functionality to the former.

The Live Loops Grid is an alternative - but interlinked and, yes, simultaneously visible - interface to the regular Tracks View, hosting multiple tempo-synced audio or MIDI loops in ’cells’ on each track, one of which can be played back at a time.

The idea is to jam around with drum loop variations on one track, bass loops on another, etc, to create an on-the-fly arrangement, optionally recording your ‘performance’ directly into the Tracks View, where it can be edited and finessed as usual. The relationship is bi-directional, so you can also drag clips out of the Tracks View into the Grid.

Playback is quantised, so triggered cells wait for the next specified beat or bar division before taking over from the currently playing loop; individual cells can be set to retrigger when clicked, or trigger only when ‘held’ with the mouse; and various ‘start behaviour’ options allow for launch timing variation.

Vertical ‘scenes’ are also supported - click the arrow at the bottom of a column to trigger all cells in that column - and a single cell on each track, or a scene, can be queued for launching via a key command. In fact, key commands are as well supported by Live Loops as they are throughout the rest of the DAW.

Alongside Live Loops, GarageBand’s XY-controlled Remix FX feature has also made it over to Logic Pro X 10.5, as a plugin offering a range of XY- and slider-controlled effects (Repeater, Filter, Wobble, Downsampler, etc) for ‘DJ-style’ performance processing. They sound great and are a lot of fun, if not something the serious producer is likely to get much mileage out of.

Live Loops have been made to work with the Logic Remote iOS app, too. This impressive adjunct to Logic Pro turns your iPhone or iPad into a comprehensive wireless multitouch MIDI controller and key command launcher, and now it also presents your Live Loops Grid just as it appears on your Mac, enabling perfectly responsive triggering of as many clips as you can get your fingers round at once, and Remix FX manipulation by touch or even tilt.

Live Loops is brilliantly designed, and perfectly fluid in its implementation and workflow; and the ability to partner it with Logic Remote is awesome, opening up a degree of control that the archaic combo of mouse and keyboard just can’t match.

Although an equivalent to Live’s Follow Actions is notable by its absence, this really is a dream come true for the Ableton-envying or dual-DAWing Logic user - and that’s a very large audience indeed.

The Step Sequencer is a new editor for the programming of note, automation and MIDI CC pattern sequences, invoked by creating a Pattern Region (a new clip type) in the Tracks or Live Loops View. Each Pattern Region is effectively a self-contained sequencer with its own configuration of lane assignments (MIDI notes, Drum Machine Designer kit pieces or automation/MIDI target parameters/CCs), time base, individual lane lengths and playback directions, swing amount, etc – a novel paradigm that yields a truly remarkable level of versatility.

Each step is programmable in terms of Velocity, Gate time, Note Repeat (up to 16 repeats), triggering Chance, Start Offset, Step Rate (overriding the global or lane-specific Rate) and Tie, and the sizeable in-built library of preset patterns can be added to with your own creations.

Easy to use and beautifully integrated, Step Sequencer is a triumph. The only thing missing is Logic Remote support, which we’ll be keeping our fingers crossed for.

Drum Synth is a simple plugin instrument dedicated to generating fully synthesized percussive sounds in four modes: Kicks, Snares and Claps, Percussion, and Hats and Cymbals. Every mode divides into various subtypes (Heavy Kick, Punch Kick, Electronic Snare, Mechanical Clap, Crash Cymbal, Ride Cymbal, Shaker, etc), each with its own appropriate set of up to eight editable parameters, and they’re all on the money sonically, and make building vibey electronic kits a quick and focused process.

Drum Machine Designer has been disconnected from the ancient Ultrabeat and retooled, Ableton Drum Rack-style, for the integration of Drum Synth and Quick Sampler (see below) into its 48-pad kits, with the controls for either appearing right within the DMD interface. That alone makes it a vast improvement on the previous version, but the addition of input and output MIDI note mapping doesn’t hurt either.

As enduring and stalwart as it’s proven to be, the EXS24 sampler was long overdue a major update - and with Logic Pro X 10.5, we’ve finally got it in the shape of Sampler.

The main issue with EXS24 has always been its mad, fiddly interface, and Sampler utterly transforms it into an intuitive new format based on five concealable panels (Synth, Mod Matrix, Modulators, Mapping and Zone), with big, clear controls and good visual modulation feedback.

It’s a pleasure to use, no matter how complex your multisampled instruments might get, and the transition from old to new is seamless, with existing EXS24 patches and projects loading into Sampler flawlessly.

And there are plenty of completely new features, too, including automatic drag-and-drop sample mapping (with pitch analysis), properly integrated sample and mapping editors, Flex Time implementation, an increase to four LFOs and five Envelopes, a second filter and a ton of new filter types. It’s everything a professional sampler should be in 2020.

That’s not the end of 10.5’s sampling betterment story, however, as Sampler’s baby brother, Quick Sampler, provides a leaner interface (two LFOs, three envelopes, one filter, full sample editing and audio recording, but only four mod matrix slots) for effortlessly mapping a single sample, or slices extracted therefrom, across the keyboard. It makes a fantastic alternative to the full multisampling enchilada, even if the similarity to Live’s Simpler is positively glaring.

That’s the meat of the latest Logic Pro, then, but before we wrap up, we should quickly mention the Auto Sampler plugin, which automatically generates mapped Sampler patches from software and hardware MIDI instruments (every DAW should have one!); and the sorcerous automatic conversion of sets of samples dragged into the Track list to Sampler or Drum Machine Designer patches.

Logic Pro X 10.5 is indeed the DAW’s most profound update under Apple’s ownership yet. Live Loops opens up a radical new (for Logic, at least) creative avenue for electronic producers, Step Sequencer is flexible and powerful, Drum Synth sounds wicked, Drum Machine Designer is slicker and more useful than before, and Sampler a last pulls EXS24 kicking and screaming into the 21stt Century.

On the downside, we’ve experienced crashes with a few plugins that definitely didn’t crash before, which is troubling. We’d imagine fixes will be rapidly forthcoming from all those developers affected, but you might want to hold off on upgrading until you’re sure your essential instruments and effects are all compatible.

Ultimately, even though Apple is largely following trends here rather than setting them, this is the modernising step up that many Logic users have been waiting for. We’re genuinely amazed we’re not being charged for it as a full version update.

MusicRadar verdict: In its unstated aim of achieving functional parity with rival DAWs, Logic Pro X 10.5 adds a wealth of empowering features and systems, including grid-based clip launching and an embarrassment of sampling riches.